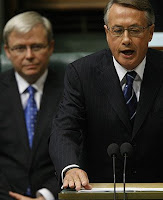 Wayne Swan has handed down his so-called “horror” second budget in the middle of a global economic crisis that has wiped $210 billion from budget revenues. There is some confusion as to the exact size of the budget deficit as the Treasurer deliberately did not mention in his budget speech to avoid giving the opposition a free sound byte. But whether it is $57.6 billion according to The Australian or $53 billion according to Crikey it is still less than what most analysts predicted. However it is also big enough to mean that Australia will remain in the red until 2016 - at best. The budget itself produced few surprises in the details as almost all of the key announcements were strategically leaked in advance (apart from the surprise announcement to raise the retirement age to 67).

Swan called it a nation building budget for recovery and he set the scene in his economic background statement. Because of the recession, the global economy will contract by 1.5 percent this year and Australia’s will contract by 0.5 percent which will impact the unemployment rate. However, Swan claimed that without the two stimulus packages in December and April, Australia would have faced a 2 percent contraction and an additional 210,000 people on the dole queue.

The centrepiece of the budget is the $22 billion investment in infrastructure. $4.6b will be spent on improvements in the metropolitan rail systems with another $3.4b on roads. The Clean Energy initiative will get $4.5b for carbon capture projects from fossil fuel emissions, $1.5b for solar, and almost half a billion for a new research and development body called Renewables Australia. There will also be $5.8b for health and education infrastructure. This is on top of $5.7b for higher education reforms.

As flagged in advance, the aged pension is increasing by $32 a week at a cost of $14.2 billion over four years. But the pension age will gradually be increased to 67, at a rate of 6 months every two years beginning in 2017. Self-funded retirees will get access to a senior’s supplement. Meanwhile, the $731m paid parental leave scheme comes in 2011 with 18 weeks of paid leave for primary carers who earn less than $150,000. The first home owner’s grant has been extended to October.

On the down side, private health insurance will be more expensive. The rebate will be means tested on a sliding scale cutting out completely at $120,000. The government is also temporarily reducing its superannuation contribution in order to save $1.4 billion. The matching rate to employee contributions will drop from 150 per cent to 100 per cent for the next three years and will revert 125 per cent for 2012 13 and 2013 14 before returning to 150 percent in 2014-2015.

The government is also looking to save $880 million from 11,000 people by closing a loophole that allows people earning over $250,000 to claim back tax on loss making hobby businesses. Another $200 million will be saved by removing inconsistencies in taxing new employee share schemes.

Swan has also ended the exemption on overseas earnings in an attempt to save $675 million. Australians working overseas for over 90 consecutive days are no longer eligible for a general exemption which exempted them from paying any Australian income tax on their foreign employment income. This means that this income will now be taxed twice however Swan defends this on the grounds that “many foreign countries are lower tax jurisdictions”. However aid workers and some government employees (defence and police) will continue to enjoy the exemption.

Predictably the budget did not impress the Opposition. Opposition Treasury spokesman Joe Hockey said the projections for a return to budget surpluses were misleading and called it “casino economics”. Meanwhile the Australian Medical Association were unhappy with the private health rebate changes saying many Australians will pay more for health adding to their anxiety when they are already stressed about job security and the future.

Elsewhere, Annette Sampson at the Sydney Morning Herald says the superannuation tax concessions in the budget will also affect lower income earners. Ben Eltham at New Matilda says the budget is sound but politically risky and calls it "a gamble posing as prudence". Bernard Keane at Crikey called the budget “a flat affair” and says Swan was given an easy ride by the media. The Australian’s Samantha Maiden says the budget documents chart a path to recovery that is more upbeat than international forecasts. Economist John Quiggin also calls it an optimistic scenario. “Although complete collapse now seems unlikely, the prospect of a long period of depressed growth, similar to Japan in the 1990s, cannot yet be dismissed,” he said.
Posted by Derek Barry at 10:53 pm

The Australian, the ABC, and most others reported the $57.6b figure which was the "underlying cash balance" (cash counterpart of the fiscal balance but excludes the earnings of the future fund).

Meanwhile Crikey reported the $53.1b figure which was the "fiscal balance" (accrual counterpart of the underlying cash balance but is not adjusted for the earnings of the future fund).