Jakaya Kikwete in the US to promote Tanzania 2.0

Tanzania President Jakaya Kikwete claimed the honour last week of being the first African head of state to visit the Obama White House. Kikwete visited Washington on 22 May where he heard President Obama say the US had a “close bilateral relationship” with Tanzania. He and President Kikwete then sat down to discuss development policy in the fields of health, education, and agriculture and the pair also went through some of the more intractable problems elsewhere in Africa.

The visit is a strong endorsement of Kikwete’s regime. It is also an endorsement of Tanzanian governance as a whole which is proving one of the sturdiest in sub-Saharan Africa. The energetic 58 year old Kikwete has a busy program in the US. As well as seeing Obama, Kikwete went to Stanford University to discuss clean water projects and also went to Silicon Valley in California to talk to technology giants such as Google, IBM and Cisco.

Tanzania is moving rapidly into the technological age. In three months time it will connect the first of three undersea fibre optic cables which will link East Africa with Europe via the Indian Ocean. The $600m project is expected to lower telecoms costs by 95 percent. This will surely have a revolutionary galvanising affect on the Tanzanian economy.

The United Republic of Tanzania was founded in 1964 as the peaceful merger of two British colonies: Tanganyika and the island of Zanzibar. It went through an inevitable "necessary" stage of one party rule under Julius Nyerere before finally returning to multi-party democracy in 1992. Tanzania is one of the few African countries where the official language is not inherited from the colonial power. There is no de jure language, but Swahili is the language of the people and the parliament with only the courts to hold out speaking English. The country’s biggest problem is the scourge of corruption which still infects the body politic.

Jakaya Kikwete was elected Prime Minister with a mandate to end that corruption. He is a former army officer and an experienced politician and officer who was first elected to parliament in 1988. He was elevated to the ministry in 1990 and over the next 15 years served a long apprenticeship managing water, finance and foreign affairs. He was finally elevated to the top job when he won the 2005 election with a landslide majority taking over 80 percent of the vote. 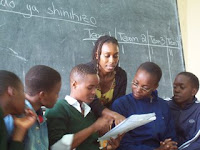 Kikwete’s early priorities were education and technology. He wanted to reverse the brain drain of academics leaving the country. Speaking at the University of Dar es Salaam in 2006 he said “development in science and technology is not only an important determinant of a country’s socio-economic development, but enhances the country’s international competitiveness and its position in the world economy.” While critics are not happy about the pace of his promised 'agricultural revolution', his Silicon Valley meetings show his seriousness in attempt to engage with the problems of technology.

Australian blogger and tech writer Stilgherrian will get the chance to see first hand just how far Kikwete’s technological revolution is kicking in. He has been sponsored by aid agency ActionAid Australia to establish a blog outpost in the local community and train them up in best-practice blogging. There is already a blogging community in the country that Stilgherrian may be able to tap into. As Issa Michuzi’s blog notes: although Tanzania still languishes in the list of least-developed nations, it is a country is endowed with abundant natural resources that are almost unparalleled in the African continent. As Jakaya Kikwete is intent on showing, the chief among those resources are its people.
Posted by Derek Barry at 10:33 pm