Protecting the FA Cup: the media and Australian football 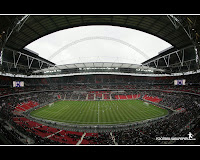 The European football season is drawing to a close with tonight’s FA Cup final at Wembley between Everton and Chelsea. I say tonight as the game kicks off at midnight Brisbane time. It starts at its traditional 3pm time in London, which is about 50 minutes away as I write. The FA Cup may have lost its lustre in recent years due to the massive money poured into the Premier League and the Champions League but it still has a host of rich traditions befitting the oldest cup competition in the world. Curiously that tradition is honoured here in Australia as the cup final is one of the sporting events “protected” as a television free-to-air event until the end of 2010.

And so SBS will show the game and talk up the local angle as “our Tim Cahill” versus “Aussie” Guus Hiddinck. They delight in the fact the FA Cup sits on an anti-siphon list alongside World Cup, the Olympics, the Ashes, the Melbourne Cup, the grand finals, the Wallabies, Wimbledon, netball, and the V8s. There is something about that list that says much about Aussies, their sport, and also their debt to Britain. In many ways it is absurd that the FA Cup is on the list. How come legislation demands that English football’s second best trophy must be broadcast to 20 million while local football makes do with two million on Pay TV?

Yet it is fair to say the banishment does not seem to be doing the local competition any harm. The A-league is thriving after 4 seasons and here in Brisbane, the crowds at Suncorp for the recently renamed Brisbane Roar are catching and matching the league Broncos and the rugby Reds. Locals will flock to any successful sporting venture and as long as the Roar can afford to play in the wonderful football venue that is the revamped Lang Park, they will do well.

The state is quickly becoming a fulcrum of power in the game. The league is expanding to 10 clubs in 2009 and both newcomers are monied Queenslanders. In rugby-league mad Townsville, Don Matheson has put his cash behind the Fury and in an inspired move have brought God to North Queensland. God in this case is Liverpool legend Robbie Fowler. However Robbie Fowler performs in a Fury shirt, he has already been a success. Fowler's media coverage has been huge and the move will guarantee every Liverpool fan in North Queensland will go and watch him play. If Fowler can last half a season, the gamble will be confirmed as an overwhelming success.

Meanwhile down on the Gold Coast, Liberal National Party powerbroker Clive Palmer is financing Gold Coast United (a rare departure from American style team naming). Palmer is, or was before the recession, a billionaire who is putting together a very handy football team. Gold Coast have brought Australian international Jason Culina back from Holland to lead the team. Culina will be an integral part of Pim Verbeek’s team in the South Africa World Cup so this is a significant coup for the league. While Culina does not have Fowler’s drawing power at the gate, he has the capability to be the best player in the A-league.

While I have cringed at the continued reliance on the marquee player system, I can appreciate it serves as an economic safety salve from a salary-capped league. The clubs have a cap of $2 million in wages for 20 to 22 staff. However they may also have a 23rd player who’s salary is not counted in the $2 million. Curiously, no team may have more than four internationals (including the “marquis”) though it does not say what happens if a fifth player is capped during their stay at the club.

The system has attracted several players past their best such as Juninho and Dwight Yorke, though Yorke in particular was successful (and returned to play premiership football for Sunderland under Roy Keane). It has also attracted Australian internationals such as Craig Moore, Ned Zelic and John Aloisi with varying degrees of on-field success. But they have all added much needed lustre to the league. The A-league is working hard off the successful template of the J-league founded in 1993, it was the eleventh best attended league in the world by 2006.

Australian football could well overtake the J-League by the time it is also 13 years old. Its move into Asia opens massive investment potential overseas. It is also slowly breaking down the traditional power structures of AFL in the South and Rugby league in the north. Last week, the Sydney Morning Herald reported how football was even taking hold in remote Aboriginal communities. The Borroloola Cyclones travelled a 1000km to Darwin to play in the Arafura Games in Darwin and caused the upset of the tournament with a 4-0 win over the Northern Territory under-16s. Whitefella coach Glen Thompson noted how the natural speed of the Indigenous locals was ideal for the game. "I'll make a brave prediction … soccer will eventually overtake Aussie rules up here because it is a global game," said Thompson. "When you make the national Aussie rules team, where can you go? Ireland to play some bastardised form of the game?"

Rugby league also suffers from lack of international legitimisation with just three countries any good at it. Union has more competition but the game they play in heaven remains attached to the colonies back on Earth. Melbourne remains passionately wedded to its footy, but is not immune to the world game. The Victory are the most successful A-league team and get 50,000 to their home matches. With Pim Verbeek's national team needing just one point in three games to qualify for South Africa 2010, globalisation is marching on here in relentless fashion. Expect also the 2011 Cup Final to be siphoned off to the highest bidder, and no-one to be terribly upset. Less clear is tonight’s result and I’m going unconvincingly for Chelsea on penalties after two hours of 0-0.
Posted by Derek Barry at 11:29 pm

My prediction was blown away in a record time of just 26 seconds.

good thing you added the 'unconvincingly' disclaimer then innit.
Rage just showed Led Zeppelin doing a 16-minute version of 'Kashmir' completely whacked.
Plant not dead yet, but looks it.

I guess the soccer is broadcast live here to keep the hooligans happy ... or because soccer is the biggest sport in the world.

After the match was won, the winning team seemed to my AFL-trained eyes, to not be very excited.
The hugs were restrained.
There was a lack of something.

The Everton race exit was a torture chamber of comiserative shoulder slapping by 'fans', poor guys.
I couldn't help wanting them to win.

winning wasn't as big a deal for the Chelsea millionaires as it would have been for Everton.

The FA Cup is a consolation prize for the London side.

It wouldn't be at all surprising if the FA cup Final was taken off the anti siphoning in 2010. It's hard to present a case for it being free to air in the national interest.