I want to ride my bicycle 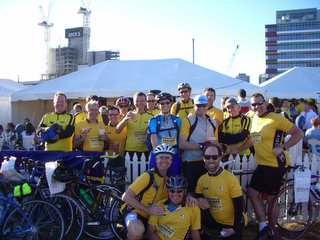 Boys on bikes for a cause. Team Dave (and only one of us a true Dave) went 210km Around the Bay in a Day in October. Port Phillip Bay, that is, the big loopy thing reaches two big claws out around Melbourne. 110km to Queenscliff on the Bellarine Peninsula, then lunch, a 40 minute ferry (packed with pushies) to Sorrento, and then another tough 100 back to Melbourne.

At the end, beeline straight to the Docklands beertent where this photo was taken. Weary, happy, Radmeisters all

Dec 31, 1999
This pencil struggles, quivers and refuses to unleash its lead
as I cross-examine in the Supreme Court of my head
let no stone be unturned in defence
describe my whether before the fog gets too dense
We want the unvarnished story of the night before
before its harnessed truth descends into lore
Please tell us, did you enjoy your countdown time
were there two thousand ways to leave 1999?
on how many levels did you engage
was it worth the 1,700 km pilgrimage?
did you recover from your huffy party start
when you turned down the role of the starring tart?
unready to drink from this party cup
no imagination left for the group dress-up
in tokened effort hesitantly down the stairs
taking despondent steps between distracted prayers
But in spite of wishing you’d never therebeen
you risked the sceptred wrath of the gilded queen
your pointless effort to blend at the back
but majesty demands you be put to rack
you were released on bad behaviour from your party prison
a witness protection scheme of inspired girlish vision
Aided by alcohol and becoming teethkeen
you smiled up from under the guillotine
“give me the head of the Barry Pissed” she cried
who painted your crown in multicolours well-supplied
though others chanted a faint disgust
as your hooligan hair became crimson rust
the identikit mugshot of party photographs
will take its place in memories library of laughs
not the bastard offspring of asylum and penitentiary
but clowning to the music of the end of the century
worshipping at the floor of an alcoholic tabernacle
awaiting the visitation of oft-spoken tackle
their double daring drinking game wove its spell
and sextruth peeped out from under its shell
then the sudden arrival of an unwanted intruder
stops the party faithful from becoming lewder
and apart from a whimsical visit of the talking buttocks
lock and key were kept firmly on all jocks
but now the unknown ones had made their call
we were suddenly placed in an upside down ball
and to escape the outsiders, they fire-blazed a diversion
which inevitably led to alien conversion
they knew all their tactics were in vain
and surrendered to this parasite pain
reluctantly accepting this insidious encroaching
they turned their thoughts to midnight approaching
with champagne fluters and flares set off in the dark
for a private party in a public park
a caravanserai of wandering Turks
bowing to the Great god of Fireworks
fighting a curious foreboding as a city poises
then a twelve o’ clock eruption of war-like noises
eerily blasting off loud-silent shadows behind city buildings
shone fleeting shapes, disappearing blues, diaphanous rings
as it ended, excitement was assuaged
the beast of ennui became uncaged
a blanketing sense of misplaced importance
flagrantly fed a gnawing impotence
the book overshadowed by its glowing cover
gleefully shouts “thats all folks, its over”
Posted by Derek Barry at 6:42 pm No comments:

The Noumenon, the 'thing-in-itself' is not an object of our sensible intuition.

Sensible enough, though hardly intuitive. Immy Kant usually knew what he was talking about though John Gray gives him a right old serve in "Straw Dogs" for his hopeless humanism.

We are all ever so 'umbly in Uriah's grip of Mad Kowtow disease.

Like flies to wanton boys are we to the Gods.

Shallow words
Countries out there warn me
I see a sign marked “Plenipotentiary”
its a word with lots of potential
pre-played jaguar shaped saxophones
shouts and bounces on a landless moon
10,000 words or more are a heinous condemnation
Of the largest exaggeration in the Southern Hemisphere
Less inclined to believe me
Hoarding billboard ancient scores
Settled by the football fieldmarshalls
Klaxon jugs spill overboarding pass
stiffest upper lips quiver in mustachioed bribery
Sangfroid in the cabin dance asks
where is Buffalo or Rome?
Spittle on the Picadilly line
Laissez-faire come home

Posted by Derek Barry at 8:42 am No comments:

Enrico Fermi asked "well you smartarses, so where all these ETs hiding?" And seeing as we haven't found them, they must not be there. Hawking said the same about time travel. Where are all these people from the future then. If time travel eventually is possible, surely they'd be here already?

The Fermi paradox can therefore be summed up as follows: The commonly held belief that the universe has many technologically advanced civilizations, combined with our observations that suggest otherwise, is paradoxical, suggesting that either our understanding or our observations are flawed or incomplete.

I would suggest that both are flawed and both are incomplete.

I'm here aren't I? Merlin and I are going sdrawkcab.

Polystyrene
once more out weaving onto the road
a shallow happiness takes hold of the soul
a beer and a wheel are a matter of fear
but damnation not hotdogs is my goal
its Mecca not Macca's for you, my boy
you're the Prince of Darkness Slurpa pride and Joy
and as the faraway wailing drifts into your mind
you realise you are no longer one of a kind.
Posted by Derek Barry at 10:20 pm No comments:

O Oceania, how dear thou are to me/though I cross the Asian sea/I miss thy half a place forever/I will walk to youth in Asia/With the wisdom of the Solomon Islands/and Flock of seagulls Iran/with Korean republics/and a Chin Chin Flute/in an anthem of anathema/

Stirred Not Shaken
does madness set its own goals?
an offence in philosophy and legality
a babble of contradiction
without reference to natural law
Can it be explored like a science
theists of the imagination
letting loose on divine barbarities
butchered colours and bruised lovers
getting stronger, getting stranger
in the bleak wilderness of the soul
are flowers sent by gods
a sweet bouquet in a holy hole
though you tip over this perfumed bucket
and find only sticky liquorice
enjoy the aniseed ride
don’t spit it out
or rule this mad goal off side
Posted by Derek Barry at 10:05 pm No comments:

The Australianfussballspieleren take on Uruguay in the early hours of tomorrow morning (Brisbane Ancient Evenings Time) in the first leg of their world cup qualifier in Montevideo. Woolly Days' thoughts are with them as they try to break the hex on Australian qualification that stretches back to the last time the Weltmeister championships were in Deutschland in 1974. Johnny Warren, o sing your chant from the grave and spur on your vainglorious countrymen.