The NSW and Victoria National Parks Associations (NPA) say that claims of large job losses in the NSW logging industry are unfounded. Both the NSW Government and News Ltd media have been running hard against Federal Government environment minister Peter Garrett for his stop work decision in NSW Murray wetlands which are the home of the threatened green leek parrot. Their argument is that a thousand jobs are at risk. However NSW NPA cites documents prepared for Forests NSW which show there are at most 120 direct jobs in the River Red Gum logging industry. “[NSW Primary Industry] Minister Macdonald has exaggerated the issue by an order of magnitude" say the NPA.

News Limited media outlets have also used the parrot to undermine the federal government’s claim it is serious about saving Australian jobs. The furore has led to the ludicrous headlines such as “parrot endangers jobs”. The Sydney Daily Telegraph launched its jackboots into the discussion on Monday with an editorial that called the government’s position “sheer lunacy”. It said concerns about the impact of logging in the area are well documented and a “dramatic stopwork” would put a thousand people out of work.

However, besides the exaggeration about the numbers, News Ltd is also ignoring the fact the logging is illegal. The NPA says the NSW government agency Forests NSW is flouting the law. “This is an extraordinary case of the NSW Government itself being caught red-handed, illegally logging our internationally significant Red Gum wetlands,” said NPA spokesperson Georgina Woods. She applauded Garrett for “preventing illegal logging of internationally significant River Red Gum wetlands in south-western NSW”.

Peter Garrett has been cautious in response, well aware of the inflammatory power of the media. He said the issue was the potential for logging to impact on wetlands of international importance.. He said the issue was the subject of discussion between the Commonwealth and the NSW government. Garrett says he expects these discussions to conclude by the end of the month and afterwards logging would still able to go ahead in a large part of the forest. “It was an important question of balance” he said. “Protecting habitat and internationally listed wetlands, with the need to protect jobs in the region.”

However Opposition environment spokesman Greg Hunt was keen to paint the government’s delaying action as “overkill”. Local Liberal federal member for the NSW seat of Farrer, Sussan Ley, brought the matter up in Question Time yesterday. Ley insists that loggers on the ground have been told a stop work order exists ready to be activated by the end of the month. She asked Garrett would he reverse the decision given that the parrot is not endangered but 1000 jobs in her electorate were.

Garrett replied that his department had not issued a stop work order for the NSW Central Murray State Forests area. He said he had spoken to the NSW Primary Industries Minister Ian Macdonald and asked him to hurry up consideration of the matter. Garrett reminded Ley there was national environment legislation (The EPBC Act introduced by the Howard Government) that affected the logging and Australia is subject to international agreements for the protection of biodiversity. 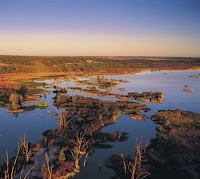 And the wetlands are extremely important from a biodiversity perspective. The NSW Central Murray State Forests and the Ramsar wetlands in Victoria (Barmah and Gunbower forests) form the largest complex of tree-dominated floodplain wetlands in southern Australia. Inside the forests lives the green leek parrot, more commonly known as the “superb parrot” (polytelis swainsonlii). Although not officially endangered, it is considered a threatened species with just a few thousand birds left in the wild. They face dangers from landclearing, loss of hollows, and lack of regeneration of woodland habitat. It also faces competition from the introduced common myna bird.

Because of the parrots vulnerability, it is the subject of a Victorian government “action statement”. The problem that although parrot nest trees with hollows are typically large and old (and therefore of low commercial timber value), adjacent trees are often subject to logging. There is also no similar plan in NSW. The cross-border area is home to the Yorta Yorta people who don’t recognise the difference between the states. Yorta Yorta Nation spokesperson, Neville Atkinson, said he hoped the Red Gum forests would be protected on both sides of the river. "We want to see the whole area managed to protect its environmental values and our heritage,” he said. “We want to ensure that the knowledge of our people, acquired over untold generations, is applied in any future management of the area.
Posted by Derek Barry at 5:54 pm