Freedom of Information session in Brisbane 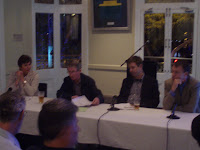 Sean Dorney began the discussion by discussing his recent experiences in being expelled from Fiji. Given that the material is similar to the ground relating to his 14 April expulsion from Fiji, which I covered in his QUT speech, I don’t propose to rehash his comments tonight. However Dorney did have a few important updates. He noted that all Fiji lawyers will be forced to re-register as of the end of June in an attempt to weed out law practitioners unsympathetic to government. Dorney said that Fijian journalists are unhappily waiting for a similar decree to come their way.

Sean Parnell spoke next. Parnell began his career as a photojournalist for The Inverell Times newspaper and then worked in radio and TV before writing for the Courier-Mail for ten years. He is now the Queensland bureau chief of The Australian and specialises in Freedom of Information (FOI) laws. Parnell lamented the gradual dumbing down of political debate and the increasingly strained relationship between politicians and journalists. He talked about the “leap of faith” required to believe the Queensland overhaul of state FOI laws will work.

Parnell lamented how the “spin cycle” made getting even simple information from governments an extraordinarily difficult task. He applauded the John Faulkner efforts at a federal level to reform the FOI laws despite the tight media management of the Rudd Government. Parnell said journalists should not rely on FOI which was “just another tool” to get information out of governments. He also noted that given the usual three month delay between making FOI requests and getting the information means that journalists need to look beyond the news cycle to determine what to request.

ABC’s Peter McCutcheon spoke next. McCutcheon agreed with Parnell that communication between politicians and journalists had deteriorated. He said that whenever he requests an off-the-record briefing on an issue, he has to wait for several weeks and even then all he gets are “weasel words” from a minister. McCutcheon also mentioned how journalists who successfully get FOI data are penalised as they only have 24 hours to use the fruit of their hard work before the same information is released to all other media. Parnell interjected to say that this is the media’s own fault. He used the example of where a media outlet FOI output turns out to be useless, but they use one damning statistic in “paragraph 340” as a lead. Parnell says governments will then deliberately reveal the entire file to show the news lead was taken out of context.

While the mix of Fijian content from Dorney did not always sit well with the FOI message from Parnell and McCutcheon, the session did highlight that Australia cannot afford to be complacent about freedom of the press. As I wrote here a few days ago, governments in Australia employ 4,000 people as part of their PR arm, outnumbering the total of journalists by a staggering four to one. No wonder then, says Peter McCutcheon, whenever he speaks to ministers, all he gets is “a tightly controlled message with not a lot of content”. The wider question then is, if messages do not carry content, what exactly is it they are conveying instead?
Posted by Derek Barry at 12:19 am