Australian Federal Police (AFP) chief Mick Keelty announced his resignation this morning after eight years in the job. Keelty had two years left on his contract but will finish up on 2 September which will mark 35 years in his police career. Keelty’s term in office has been dotted with controversy and he refused to comment publicly today. However, Prime Minister Kevin Rudd chose to praise Keelty’s contribution to public service including his work on the Bali bombings and the Jakarta Australian embassy bombing. "What I'd like to say to Mick on behalf of a grateful nation is, 'Well done', and the nation owes you a debt of gratitude for the service you have rendered," he said.

Not everyone senses that debt of gratitude. In 2005, the father of one of the Bali Nine drug mules sharply criticised Keelty for knowingly allowing Indonesian police to arrest the nine, rather than allowing them to fly to Australia and arresting them in Sydney upon their return. Bob Lawrence, father of Renae Lawrence said at the time, "as far as I'm concerned, and excuse the expression, [Keelty] is an arsehole. These kids were forced into this...they should have been either arrested at the airport here or followed to get the big guys. I don't know how [the Australian police] can sleep at night.”

The bungled case of Indian doctor Mohamed Haneef also seriously damaged Keelty’s reputation. The AFP did everything in their power to get a conviction related to the Glasgow bombing including leaking biased and misleading material about the prosecution. The Commonwealth was eventually forced to drop the case after admitting errors in evidence. Keelty refused to admit responsibility and continued its investigation into Haneef well into 2008. As Bernard Keane wrote today in Crikey, “Keelty persisted with the fiction that somehow Haneef might yet turn out to be a terrorist [and] even when the AFP finally called a halt to its $8m persecution of the man, it insisted ‘that some long standing overseas inquiries are yet to be fully resolved.’.”

Former head of the National Crime Authority QC Peter Faris told SBS World News tonight that although Keelty’s reign had started well, the Haneef affair “left a bad taste in the mouth”. He also told the ABC today that his resignation was linked to the Haneef case and he was merely waiting for a reasonable time after the inquiry into the matter before resigning. Not surprisingly, the government have rejected this analysis (or at least rejecting the suggestion he was pushed) with Federal Attorney-General Robert McClelland saying the decision was "entirely the decision of the Commissioner".

Keelty leaves behind a 6,500 strong federal police organisation that celebrates its 30th anniversary a month after his farewell. The favourites to replace him are the two deputy commissioners, Andrew Colvin (head of national security) and Tony Negus (head of operations). Either will have big shoes to fill as the AFP has wide-ranging powers to deal with matters such as counter-terrorism, human trafficking and sexual slavery, cyber-crime, peace operations, protection and other transnational crimes.

But while Keelty has expanded the organisation, critics say he has done so at a high cost of transparency. On ABC’s 4 Corners in November last year, Sally Neighbour charted how a “once lionised” AFP was now “ridiculed for apparent bungling, excessive secrecy and cosying up to political masters.” Neighbour says the Haneef affair was just a symptom of deeper problems that beset the AFP. Keelty’s high profile leadership style and politicisation of the organisation caused a damaging split within the organisation. One former officer told Neighbour that “the AFP's major objective has been to look good whilst at the same time avoiding public scrutiny and accountability.”

Keelty had earlier outlined what he had in mind by way of media scrutiny when he made a speech at the Sydney Institute in January 2008. Keelty said that there should be no public comment made about terrorism investigations until each matter has been finalised in court. He also called for a limitation of criticism of the AFP and other government agencies. "I understand it can be difficult to wait for the chance to freely express ourselves but I do believe to best serve the public interest and to attain the full enjoyment of all our rights we must sometimes delay that expression," he said. 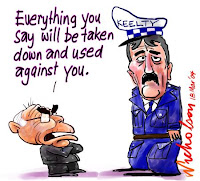 However the former journalist at The Australian who exposed the AFP’s wrongdoing (much to the then Howard Government's embarassment) in the Haneef affair did not agree. Hedley Thomas (who is now head of PR for Queensland Gas) won a Walkley award for his coverage of the affair. Thomas was sharply critical of Keelty’s Sydney Institute speech: "On the one hand he was saying that defendants and suspects deserve a much better go in the court of public opinion and that the media should treat them more kindly," he said. "But the facts are that in the Mohamed Haneef case and others, it's been the police and security agencies and the politicians using police information that have smeared the character of the suspects before they've even been charged." With Keelty gone, the AFP can now begin rebuilding trust in its competence and resume a more guarded approach to using its vast and under-scrutinised powers.
Posted by Derek Barry at 10:31 pm