The Australian Federal Government is rightly getting a lot of flak at the moment for the extraordinary tightness of its media management. The budget came and went without Treasurer Wayne Swan announcing the actual deficit size for fear of giving the Opposition an advertising grab. Just last Tuesday, Kevin Rudd appeared on ABC Lateline and steadfastly refused to attach the word “billion” to the dollar amount of the deficit. Interviewer Tony Jones asked him: “Is there a political spin rule which says the Prime Minister must not say that figure?” Rudd fudged a reply but the answer is undoubtedly yes. The spin rule emerged from the heart of the massive Australian public relations state. Kevin Rudd is certainly the most aware Prime Minister yet about the power of marketing a carefully crafted media message. However, it not just about Rudd’s obsessive media management. Public relations has long been part of the institutional framework of government. This post uses research by political scientist Ian Ward to deconstruct the various components of the Australia PR state.

In their important 1994 study of the UK poll tax “Taxation and Representation”, Deacon and Golding noted how the marketing of government activity had become “a central activity of modern statecraft”. The pair said there had been a massive expansion of the public relations state in the previous 20 years with extensive use of media advisers and communications professionals to promote policy and outmanoeuvre opponents. What had occurred was the institutionalisation of PR within government well beyond the traditional remit of election campaigning.

Governments learned the lesson the hard way from media that they needed to play a strategic role in promoting a particular policy solution. They began to leverage off the natural advantages governments have in order to control the public conversation on political issues. As a result, they began to use advertising, marketing and public relations campaigns to sell policies and to integrate the communication activities of the various PR arms and agencies.

The media minder is the oldest of the four strategies. The first government press secretary was appointed in 1918 and by the 1930s it was established practice for prime ministers to recruit an experienced journalist to write speeches and press releases. Over time other senior ministers got their own minders and under Whitlam all ministers had a press secretary. Now relabelled as media advisers, they have evolved to provide strategic advice to ministers on how best to manage political news with overall responsibility to portray the government in the best possible light.

Ward illustrated his argument with the 2001 example of Defence Ministry press secretary Ross Hampton. During Operation Relex (the children overboard affair), the department was besieged with media enquiries. Defence Minister Peter Reith ordered that defence personnel were forbidden to talk to the media and all enquiries had to be dealt with by Hampton. The aim was to ensure that coverage of the affair was always couched in terms favourable to the government and every statement was “on message”. Hampton had a dedicated phone line to Defence public affairs. Driven by the daily news cycle, he would ring them 10 to 15 times a day and get absolute priority. It was his job then to spin whatever comment, report and pictures Defence gave him. According to Ward, Hampton served on the front line of the Australian PR state.

The second flank is the media unit. Under the 1984 Members of Parliament (Staff) Act, governments can employ and assign media advisers as they see fit. This allowed them to create media units for gathering and disseminating information. The Hawke/Keating government set up the infamous National Media Liaison Service which the Press Gallery dubbed as the “aNiMaLS” in testimony both to the acronym and the group’s aggressive promotion of the government. The Howard government replaced the aNiMaLS with the toned down Government Member’s Secretariat (GMS) but the nature of the role remained the same: pumping out party propaganda.

Whatever the name, the media unit consists of over 20 former journalists helping governments publicise policy. While many are farmed out to junior ministers, they work closely with the Prime Minister’s office and routinely supply ministers with transcripts of opposition media interviews. They also provide media training, prepare news letters and issue political pamphlets that cross the border into campaigning activities which are beyond the boundaries of taxpayer-funded staff. As Ward says, the media unit has become an indispensable feature of the Australian PR state. 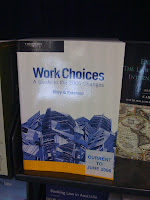 The third aspect is the departmentally-based public affairs section. Every government department has one and they vary in size and importance. These staff are public servants and supposedly do not fulfil a party political function. However Ward says it is difficult to imagine that the government of the day do not benefit from departmental PR programs that promote its policies. Through this mechanism governments can carry out public communication campaigns, commission polling, or contract ad firms to promote policy decisions. The Howard Government in particularly was notorious for the size of its ad budget including the “alert not alarmed” fridge magnet campaign, the private health insurance campaign and the unlamented Workchoices campaign. According to an Australian National Audit Office report (pdf) released in March this year, the Coalition spent $1.8 billion in advertising during its 12 years in power.

The final part of the government PR jigsaw is whole of government coordination of the first three arms. In 1982 the Fraser Government established the Ministerial Committee on Government Communications to ensure all information campaigns conformed to government priorities. The politically-controlled MCGC oversees all sensitive communications, approves major strategies, and vets the hiring of PR, advertising, marketing and research consultancies. Contracts are usually awarded to favoured party pollsters such as Hawker-Britten for Labor or Crosby Textor for the Coalition.

About 4,000 journalists were working for Australian state and Commonwealth governments in a public relations capacity in 2002. The number has probably gone up since then. Yet despite knowing the broad features of the apparatus we know surprisingly little about the detailed operation of the Australian PR state. Even the government acknowledges this. When Julia Gillard introduced the National Audit report to parliament in March she talked about “the shadowy work” of the MCGC. The field is crying out for research to drag it out of the shadows. As Ian Ward concludes “there remains a sizeable gap in our understanding of political communication in Australia”. This cannot be good for Australian democracy.
Posted by Derek Barry at 10:03 pm

It was of course Relex not Rolex - Thanks for "watching" over me!