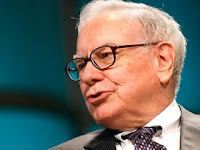 Speaking in front of 35,000 investors at the annual Berkshire Hathaway shareholders meeting, billionaire Warren Buffett joined the growing litany of voices charting the decline of the newspaper industry. The 78 year old cult investor known as “The Sage of Omaha” is an avid lifelong newspaper. However he said newspapers had lost their relevance to the Internet and were no longer an attractive investment option. He told his Omaha audience on the weekend he would not buy newspapers “at any price” because of the possibility of “going to just unending losses”. Buffett’s comments come as The Boston Globe looks like becoming the latest high profile American newspaper to go under.

Despite his grim tidings, Buffett said he would not sell out his existing newspaper interests. Buffett’s company Berkshire Hathaway is the largest shareholder in The Washington Post Company (Buffett is a board member) and also owns the Buffalo News. The Washington Post Company posted a $18.7 million quarterly loss last week as its flagship paper reported a 33 per cent slump in print advertising sales. Buffett continued to show faith as he said the Post had an attractive business model with its cable interests. But he added it "does not have answers to the problems of the newspaper business."

Berkshire Hathaway is not immune from the global crisis with operating profit down about 12 percent from a year earlier to $1.7 billion. Company stock has fallen 39 percent since December 2007. Buffett was asked at the shareholders’ meeting whether there was a good price to invest in today’s newspaper business. His full answer was instructive:

The current environment is accentuating problem in newspapers -but it’s not the basic cause. Charlie [Munger] and I read 5 a day. We’ll never give them up. We would not buy them at any price. They have the possibility of going to unending losses. They were essential to the public 20 years ago. Their pricing power was essential with customer. They lost the essential nature. The erosion has accelerated dramatically. They were only essential to advertiser as long as essential to reader. No one liked buying ads in the paper - it’s just that they worked. I don’t see anything on the horizon that causes that erosion to end.”

Writing in Slate, Jack Shafer said Buffett predicted the death of newspapers as far back as 1992. He quotes a letter Buffett sent to Berkshire Hathaway shareholders that year that said newspaper, television, and magazines were losing their status as mass profit-making franchises. Their previous success was based on product need, the lack of a substitute, and the lack of price regulation. Newspapers had survived despite often being an inferior product because of what Buffett called their “bulletin board” value. But with the rise of cable and satellite broadcasting and Internet, newspapers no longer sold "as if they were indestructible slot machines".

Jeff Jarvis agrees and says the prognosis “keeps getting clearer and clearer”. He says it is making less sense to try to preserve and protect the failing newspaper model. “Every day that papers keep printing is a day that they haven’t reinvented themselves for a new reality,” he said. Jarvis says he is not being a doomsayer, but merely observing inexorable events in the economy. “The insane response to this change is to resist it and mourn it,” he said. “The sane response is to find the opportunity in it.”

Locally, this is also the view of the Australian Newsagency Blog. It believes the crisis has been delayed here by the large home delivery industry because “small business newsagents carry the more of the high cost of distribution than delivery contractors in the US.” However, the writer "Mark" is not naïve enough to believe that that can stave off disaster. “[Newsagents] cannot rely on newspaper generated traffic to our businesses forever, not even for five years,” said the blog. “We need to build new traffic urgently.”

The crisis that now envelops journalism is also starting to impact book publishing. Ian Jack in The Guardian says royalties are tumbling, staff are being cut, and publishers are taken fewer risks. Jack explains that the reasons are similar to newspapers’ demise: “generations are now growing up with the idea that words should be read electronically for free - a new human right - which has grave consequences for the people paid to compose and edit them.” 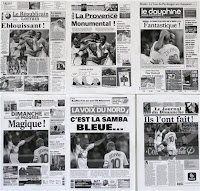 While no one seems sure how this “new human right” will be paid for, only one country has gone down the path of government bailout. In January French President Nicolas Sarkozy announced a €600m ($800m) emergency aid package for his country's troubled newspaper industry. The French press is among Europe’s least profitable with a rapidly declining readership. The most high profile of Sarkozy’s rescue plans was the announcement that every French 18-year-old would get a year's free subscription to the paper of their choice to boost reading habits. He also relaxed foreign ownership rules, extended tax breaks for investors in online journalism and doubled the state’s advertising in print and online papers.

However there is a legitimate question about whether the package compromises press freedom. The concern is that French journalists will not be capable of biting the hand that now feeds them. But it is also arguable this problem is no different than the one that exists currently in the purely commercial sphere. In the book “Last Rights”, a group of academics from the University of Illinois claim freedom of the press used to be defined as a political matter. However the communication system in capitalistic societies is primarily economic. To have a truly free press, say the authors, there would not only be no state intervention, there would also be a lack of market forces, ownership ties and other material bonds. Clearly no such beast exists in any profitable or influential form. Some form of economic intervention is almost always required to make it work. Sarkozy’s plan may not save newspapers, but might yet provide a reasonable transition path for journalism to cross from print into the digital realm without permanently damaging the public service it provides.
Posted by Derek Barry at 9:05 pm