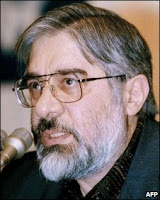 One thousand bloggers have announced their support for former Prime Minister Mir Hussein Mousavi’s bid for the Iranian presidency. The bloggers have published their names and websites on www.mirhussein.com (in Farsi) which proclaims itself as a forum created by “a big group of bloggers supporting Mousavi.” The bloggers publicly backing Mousavi come from a wide variety of viewpoints ranging from reformist to fundamentalist.

Mousavi’s appeal across the political boundaries makes him a real threat to unseat President Mahmoud Ahmadinejad in the 12 June election. However it the reformists who have most hopes in Mousavi. His position as the leading challenger firmed in March when he was endorsed by former liberal president Mohammed Khatami who pulled out of the election to avoid splitting reformist supporter votes. Mousavi’s campaign received another boost yesterday when former Vice President Masoumeh Ebtekar also announced she was quitting the race and supporting him. Meanwhile Ahmadinejad's popularity has slumped badly as Iran suffers in the global recession with chronic unemployment and double-digit inflation.

Mousavi has subsequently gone on to label Ahmadinejad as an extremist and attack him for his mismanagement of the economy. Last month the New York Times reported Mousavi wants a more positive relationship with the US although, like his opponent, refuses to back down on Iran’s nuclear program. “Weaponisation and nuclear technology are two separate issues, and we should not let them get mixed up,” he said. Mousavi also said he was in favour of freedom of speech and relaxing media restrictions including changing the law that bans private television stations.

But it is Ahmadinejad’s economic record that remains the focus of Mousavi’s campaign. Addressing his supporters in the town of Qarchak near the capital Tehran, he criticised the government for the “expansion of poverty under the excuse of administering justice” and claimed the government was making promises it was unable to keep.

The 68 year old Mousavi does have good economic credentials. He was admired for his management of the economy when he was Prime Minister under during the difficult days of 1980s war with Iran. The then president Ayatollah Ali Khamenei, now the Islamic Republic's supreme leader, changed the constitution to eliminate the role of Prime Minister when Mousavi resigned in 1989 and he (Mousavi) has not held a government position since then.

Mousavi then kept a self imposed silence until he re-emerged to announce himself as a presidential candidate. His current online support is significant as blogs were one of the few places where Iranians could find public dissent of Ahmadinejad’s recent stand-off with western powers. Some Iranian bloggers have paid a high price for taking a stance against the government and religious hierarchy according to the Committee to Protect Journalists (CPJ). The CPJ labelled Iran as the second worst country in the world (behind Burma) for bloggers who must all register their Web sites with the Ministry of Art and Culture. Hussein Derakhshan has been detained since November 2008 because of comments he allegedly made about a key cleric while another blogger Omidreza Mirsayafi committed suicide in prison in March. Mirsayafi was serving 30 months in prison for insulting Supreme Leader Ayatollah Ali Khamenei and Ayatollah Ruhollah Khomeini. 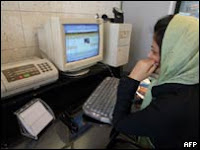 Mirsayafi was not a political blogger. Most of his articles were about traditional Persian music and culture. His lawyer told Reporters Without Borders that Misayafi’s death was “a sad reminder of the fact that the Iranian regime is one of the harshest in the world for journalists and bloggers”. In the press conference when he announced his candidacy for the president Mousavi told 90 reporters his opposition to the government’s plan ‎to boost moral security, which includes monitoring the behaviour of Iran’s youth. ‎Mousavi said, “if I am elected president, I will put an end to inspections by the morality ‎police.” ‎It was this promise, more than any other, that has probably earned him the support of the country’s bloggers.
Posted by Derek Barry at 8:14 pm