Exit polls give Congress a narrow lead in Indian elections

India’s massive month-long election has finally closed with exit polls suggesting the country is headed for a hung parliament and coalition government. The fifth and final phase ended yesterday and all six polls give the ruling alliance led by the Congress party a slight lead over the main opposition bloc headed by the Hindu nationalist Bharatiya Janata Party (BJP). However these polls should be treated with caution as they proved badly wrong in the last election in 2005. Nevertheless, it looks certain that when the final result is announced on Saturday neither grouping will have anywhere near the 272 seats required to command a parliamentary majority in the Lok Sabha (lower house).

The marathon election began on 16 April with 107.8 million registered voters deciding the fate of 1,432 candidates across seven states and two federally administered territories. The swing southern state of Tamil Nadu was among the last to vote yesterday but will be crucial as it has backed the winner in the last five elections. However the fight for its 39 seats has been complicated by the plight of fellow Tamils in the conflict in neighbouring Sri Lanka. Regional political parties say New Delhi have not done enough to stop the bloodshed and have vowed to protect the interests of ethnic Tamils if voted into power.

According to India’s constitution the new parliament must be in place by 2 June. As a result party dealmakers have arrived in New Delhi to start intensive negotiations with the host of small regional parties that are likely to take seats. There is plenty of cloak and dagger horse-trading such as when the head of the Janata Dal regional party, H.D. Kumaraswamy drove to Congress president Sonia Gandhi's home with his face covered and then left by a different exit. Kumaraswamy had previously indicated he was supporting the Third Front.

Kumaraswamy’s defection will be a major blow to the Third Front which is an umbrella movement of leftist and regional parties. The unwieldy alliance set up in March includes the Communist Party of India (Marxist), the Communist Party of India, the Revolutionary Socialist Party, the All India Anna Dravida Munnetra Kazagham, the Forward Bloc, the Janata Dal (Secular), the Telangana Rashtra Samithi, and the Telugu Desam Party. The Front’s core objective is to present an alternative to alliances led by India's two national-level parties. However despite the opportunities presented by a hung parliament it is unlikely the Third Front will have a chance of forming government. And even if it did, The Economist says it would be “fatally weakened by internecine bickering, policy dissension and leadership clashes.”

So who will Indian president call to form government? Traditionally the largest party is given the first opportunity, BJP president Rajnath Singh remains confident his party will be the largest despite the exit polls. “The BJP will emerge as the single largest party. The BJP-led NDA (National Democratic Alliance) will get a majority or will fall short by a small margin in which case I am confident that other political parties will support us,” Singh said. Singh refused to name which parties would support him if NDA falls short of a majority. “This is a part of our strategy. I will not say anything at all on this issue,” he added. 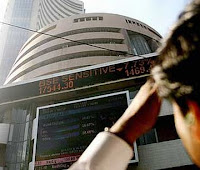 The results make it more likely that whatever coalition is formed, it is likely to be weak and the government would not last a full term. This feeling was noted by the Mumbai stock exchange with the BSE Sensex trading down 1.3 per cent today amid concerns of a weak coalition having to deal with India’s economic problems. The financial services firm Goldman Sachs noted that India's fiscal deficit ranked among the highest in the world and was likely to exceed 10 per cent of GDP in the current fiscal year.

The Times of India says neither major party have articulated a coherent strategy to dealing with the problem. “Contracting growth and diminishing revenues mean that public expenditure will come under strain,” said the Times. “Neither the Congress nor the BJP have alluded to this inevitability.”
Posted by Derek Barry at 8:10 pm