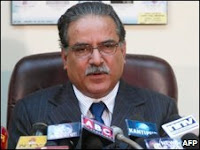 Nepal's Prime Minister Pushpa Kamal Dahal resigned yesterday following a confrontation with the president over the dismissal of the army chief. The Prime Minister and former rebel Maoist leader, who is more commonly known as Prachanda, announced his resignation in a televised address after just nine months in the job. "I am announcing my resignation from the council of minister,” he told the nation. "I have resigned from the post of prime minister from today for the protection of democracy and peace.”

The crisis started a day earlier when Prachanda sacked army chief Rookmangud Katawal for disobeying instructions about the enlistment of former rebels into army ranks. However his decision was overruled by President Ram Baran Yadav. The president directed Katawal to continue in office, saying his dismissal by the cabinet does not "meet the constitutional requirements and due process." Prachanda hit back calling the decision “an attack on this infant democracy and the peace process.”

But as the constitution is still being worked out, Prachanda did not have the right to overrule Yadav’s decision. The secretariat of the Unified Communist Party of Nepal (Maoist) quickly met after his resignation and decided to “intensify struggle in the parliament and the street” until the President withdraws his “unconstitutional” move. Secretariat member Barsaman Pun said, “Since the president’s move is a constitutional coup, we will continue protesting against the move.”

Prachanda became Prime Minister in August last year as part of an agreement to end the longstanding Nepalese civil war. 13,000 people died in the ten year struggle and Prachanda emerged from hiding after three years of negotiation to take power. He has long wanted to sack the army chief who fought against him during the rebel insurgency. Matters came to a head over the issue of integrating the former guerrillas into the national army. Prachanda faced strong protests from Katawal and his supporters against the idea of integrating a “politically indoctrinated guerillas” into the army.

Since the end of the conflict, the Maoist fighters have been staying in camps monitored by the United Nations Mission in Nepal (UNMIN). UNMIN itself has tried to stay impartial but has been accused of siding with the Maoists. There is a danger of mutiny inside the Nepal Army if their former sworn enemies are integrated. Meanwhile Army Chief Katwal has constantly reiterated his policy of accepting only those “deemed fit through free competition,” much to Prachanda’’s annoyance.

But Prachanda’s position has been significantly weakened recently. While the Maoists remain the largest party, his government has now been reduced to a minority. Key ally The Communist Party of Nepal-Unified Marxist Leninist (UML) announced their withdrawal of support due their refusal to support Katawal’s sacking. The UML immediately started negotiations with other political parties to create an alternative ruling coalition and are widely tipped to head the new government. They look certain to get the support of the Nepal Congress, the main non-communist party. Nepal Congress leader Shekhar Koirala said they haven’t yet decided whether to support a new government yet from inside or outside a coalition. But of one thing he was certain: “We will not lead the government. We want the UML to lead.”

The question now is whether Prachanda and his Maoists accept these outcomes as part of the grubby business of democracy. Although senior Maoist leader Baburam Bhattarai has said that his party would hit the streets now demanding resignation of the President, there has been no sign of violence so far. But whatever happens, as Nepalese expert Neil Horning points out at Neil’s Nepal, it is likely the Maoists have some contingency plan. “They didn’t survive 10 years underground while building an army of 30,000 piece by piece through incompetence,” said Horning.
Posted by Derek Barry at 9:56 pm