Time to get rid of Queensland’s faulty fuel subsidy 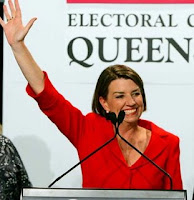 In a rare outbreak of policy sense, Premier Anna Bligh signalled yesterday that Queensland's eight cents a litre fuel subsidy could be finally be scrapped in June’s state budget. In the 21st century it defies belief that any government would subsidise petrol prices. Yet the Bligh Government had repeatedly assured the scheme would be protected during the election campaign to avoid being wedged on the issue by the Opposition. Now that the election is safely behind her, Bligh is looking for options to get out of that commitment. She said that although she wanted to keep every election promise, her overriding promise was to protect jobs. "To do that we've got to look at some pretty tough decisions and right now everything is on the table,” she said. “That means things like the fuel subsidy have to be considered."

The government may have been encouraged by an editorial in the Courier-Mail in January (incidentally, well before the election) which called the subsidy a luxury Queensland cannot afford. However, the usual vested interests have come out against scrapping the subsidy. Nick Behrens of the Queensland Chamber of Commerce and Industry says Queensland businesses will lose their competitive advantage while Agforce president John Cotter says people living in rural areas would be hit hard if it was removed. Opposition Leader John-Paul Langbroek somewhat bizarrely described the subsidy as a "core service" and claimed losing it would cost Queenslanders $250 to $300 a year on average. And RACQ general manager Gary Fites also weighed in saying "fuel prices will rise by nine cents a litre if the government wants to remove the subsidy.”

Fites is exaggerating but the chorus of opposition shows the difficulty Bligh will have to overcome to abolish the subsidy. Andrew Bartlett says the state government is dealing with the dilemma of dealing with bad policy that is electorally popular. Bartlett says the $600 million a year scheme is an “absurd, expensive program” however, he also says we only have ourselves to blame: “[We often call] for strong action while opposing anything that we feel will make us personally worse off,” says Bartlett “If more people were prepared to speak out in support of good policies that we know are unpopular, it might slightly reduce the need for governments to make quite so many of those promises in the first place.”

This particular promise dates back to the Borbidge coalition government in 1997. They introduced the subsidy after a federal High Court decision prevented the states and territories from collecting business franchise fees on fuel, tobacco and alcohol. In response the Howard Government imposed a surcharge of 8.1 cents per litre on the rate of customs and excise duty and returned surcharge revenue to states and territories. Because Queensland never had a fuel tax, the state government reached an agreement with the Commonwealth and the fuel industry to provide an 8.534c a litre subsidy for retailers to pass the benefit to consumers.

However, inquiries have found that the whole eight cents is not fully passed on to the motorist. In 2007 a Commission of Inquiry led by Bill Pincus (note: the actual report has been moved from the Queensland Government web site and is not available at the time of writing) found that the fuel subsidisation was deeply flawed and conflicted with policies to lower transport greenhouse gases. He also found more than $100 million a year of the $541 million scheme was not being passed on to motorists. Pincus found no evidence of criminal behaviour. "In the main, the subsidy was simply regarded as a component of the cost of fuel and was otherwise disregarded," he said in the report. He recommended the laws be repealed or else incorporate a provision to publish "reference prices".

Neither recommendation went anywhere. In June 2008 the Bligh government considered a plan where drivers would swipe a bar code on their licence at the point of sale to receive the full subsidy. But no one seemed happy about this idea. Civil libertarians warned of privacy concerns. Transport workers thought that interstate truck drivers would suffer while tourist operators said the scheme would deter holidaymakers. Pincus also came out against it saying retailers would simply raise their prices to maintain profit margins.

Given the political difficulties of removing the scheme entirely, perhaps the most palatable proposal is that of economist John Quiggin’s which has been endorsed by the RACQ. Quiggin suggests the government gradually phase-out the subsidy over four to five years and redeploy the savings to service borrowings to fund road and public transport infrastructure. The annual reduction in the subsidy would be 1.6708 cents per litre with consequent fuel price increases of about 1.84 cents per litre per year. Each cut would release about $100 million to service borrowings for additional road and public transport infrastructure. This amount would also repay debt of $1,000 million over a term of 15 years at an interest rate of 6 per cent. Perhaps most importantly, this “death of a thousand cuts” for the subsidy would result in the least amount of electoral (and media) pain.
Posted by Derek Barry at 11:17 pm

Anna Bligh and the labour govenment has to go. Qld will have the highest rego, expensive fuel and the worst roads in the country. This government has done nothing but stuff this country since getting in. Anna also needs to learn there is more to Qld than brisbane and the south east. The only thing this goverment has in its fovor right now is the lazy spinless public, who wants to complain but not fight. I will fight, If you dont want to fight these Idots in charge, shut up and take it dont complain. We as the public need to take a stand, enough is enough. How much more of do we have to put up with.This is the last straw we need to unite and fight the government. If we stop they stop.
Regards
Queenslander