Peshawar bombing: The Taliban strikes at the place of the frontier 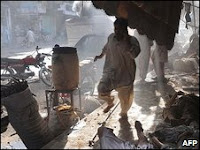 The Pakistani city of Peshawar is on high alert after 13 people died when two bombs exploded in a market and a suicide bomber attacked a police checkpoint. Six people died and another 70 were injured when the bombs exploded in the marketplace and gunmen fired at police when they arrived on the scene. Two gunmen were shot dead. Another five died when a suicide bomber ploughed into a military checkpoint on the city outskirts killing four soldiers. Police have placed restrictions on motorist movements in the capital of North West Frontier Province which has seen a marked increase in violence in the last three weeks in response to the army's anti-Taliban operation in the nearby Swat valley.

The Peshawar attacks came just hours after the Taliban warned of countrywide attacks. The Taliban has also claimed responsibility for Wednesday devastating 500kg suicide bomb strike on the Lahore offices of Pakistan’s intelligence service ISI and the city police that killed at least 26 people and wounded 250 people. A senior police officer has confirmed a main suspect had been arrested who has links to the Taliban. Other attacks may be planned on Multan, Rawalpindi, and the capital, Islamabad. Hakimullah Mehsud, a deputy to Pakistani Taliban chief Baitullah Mehsud, said their targets are security forces, “who are killing innocent people in Swat and other adjoining areas.”

Today, Peshawar residents told Al Jazeera people were afraid to leave their houses because of the likelihood of more violence. "Things have come to such a pass that from morning till evening there is a sense of foreboding," Shah Gul, a shopkeeper, said. "When a person leaves his house in the morning, his wife, his sister, and his parents are not sure if he will return in the evening." Others criticised the government for launching its military offensive to drive the Taliban out of the Swat valley and adjoining districts. "Our rulers should get some sense into their heads and change their policies," Mohammad Ishfaq, a local businessman, said.

The areas around Peshawar have been overrun with refugees fleeing the offensive. Between two and three million people have been displaced in Swat, Buner and Dir districts in the NWFP. Heavy fighting between Pakistan's military and Taliban insurgents has continued for the last three weeks. Although fighting has intensified in the Swat capital of Mingora, the Taliban resistance is proving resolute. The Taliban have retreated to the mountains but still hold 30 percent of Mingora. There is also concern that many of the refugees fleeing towards Peshawar may be Taliban militants.

Both sides on the war have identified Peshawar’s dominant Pashtuns as a crucial force to win over. The Pashtuns are renowned for their generosity but many are being inundated by refugees from the Swat valley. "We are poor people. Still we have given shelter to six people in my tiny, two-room house," said Farooq Khan, a shopkeeper in Rustam village, Swabi, 140km northwest of Peshawar." I cannot afford them, but it would be against Pakhtun tradition to deny shelter to anyone," he added. 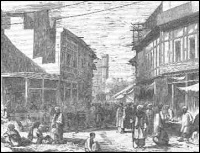 The city of Peshawar was given its name by Moghul rulers in the 16th century. The name means “place of the frontier” in Farsi. It is aptly named and has long been a place that has hovered on the edge of war. It was the centre of Afghan refugees fleeing across the Khyber Pass after the Soviet invasion in 1979 and again after the US invaded in 2001. The danger is that Peshawar will now become a frontier again. The stakes for high for Islamabad. Support for the war in Swat is holding but if Peshawar becomes a regular target, then the Pashtuns may end, or even switch, their support. If that happens, Pakistan's war against the Taliban would quickly collapse with potentially disastrous consequences.
Posted by Derek Barry at 9:51 pm