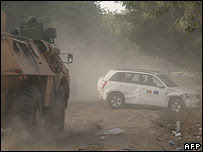 The UN Security Council yesterday condemned rebel attempts to seize power in Chad and called on all countries in the region to co-operate to end the war. The council welcomed the AU decision to mandate Libyan leader Gaddafy and Republic of Congo leader Denis Nguesso to commence negotiations with both sides of the conflict and to initiate efforts aimed to seeking a lasting solution to the crisis. The council also pledged its support for the two international missions to Chad, the United Nations Mission in the Central African Republic and Chad (MINURCAT) and the European Union force (EUFOR TCHAD/RCA) and called upon member states to “provide support as requested'' by the government.

According to many media, including the London Daily Telegraph, the Security Council call was a coded message for France to intervene in the crisis. France is the former colonial power and already has almost two thousand troops in the country. It has been a strong backer of the current administration with weapons and military intelligence. The Telegraph quoted Zalmay Khalilzad, the US ambassador to the UN, who said that if the French decide to intervene, they have the support of the Security Council.

Last week, Chadian rebels launched a major military offensive that reached the capital N’Djaména on the weekend. Government forces countered with tanks and attack helicopters and by Sunday night the rebels were forced into a “tactical” withdrawal from the city. Human Rights Watch (HRW) has called on the Chadian government to ensure that it clearly distinguish between civilians and military targets and asked that both sides not put civilians at risk. There have also been reports of arrests of opposition politicians. HRW said they were concerned that the Chadian government was using the fighting as a pretext for settling scores with the unarmed opposition.

The French foreign minister said the Chadian government was in control of the capital N'Djamena "for the time being". Thousands of people fled the city during a lull in fighting, urged by the rebels. Waves of refugees carried blankets and bed sheets on their heads and crossed a drought-stricken river to get to neighbouring Cameroon. The normal 30 minute trip to cross the Chari River into Cameroon is taking ten hours. There is no firm number on the dead so far. According to one aid worker "There are many deaths, the morgue is full and the Chadian Red Cross will not start picking up bodies from the roads until tomorrow”.

The conflict is related to the problems in the Darfur region of western Sudan. Long-term Chadian President Idriss Deby's has accused Sudan of backing the militants attacking N'Djamena, while Sudan accuses Chad of supporting rebels in Darfur. The Chadian rebels are from the Unified Military Command, an umbrella group of anti-Deby forces. The war in Chad intensified last year after the collapse of a Libyan brokered ceasefire between Chad and four rebel groups.

The conflict is delaying the deployment of the outside military force EUFOR TCHAD/RCA. This EU-led bridging operation in eastern Chad and north-eastern Central African Republic was authorized by UN Security Council resolution 1778 last year to “contribute to the protection of vulnerable civilian populations and to facilitate the provision of humanitarian assistance”.

The council also approved the establishment of a UN Mission in Chad and the Central African Republic (MINURCAT) and authorised the EU to deploy forces in these countries for a period of 12 months. But EUFOR has been delayed and won't start until the fighting stops in Chad. This is a ridiculous catch-22 situation; EUFOR is waiting for the situation to improve so they can implement their mandate to “protect civilians in danger”. Once again, Africa weeps while Europe dithers.
Posted by Derek Barry at 7:47 pm

For this situation, here is a poem from a desperate Chadian who sees their world falling apart. It was originally published in French. May these words press us to do more to see lasting change come to this desperate country:

Shame on the International Community

Shame on you who push the country off a cliff

cry of distress of a Chadian