Don’t Read All About It: News in terminal decline 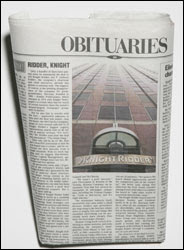 The latest British Social Attitudes report has found a serious decline in news consumption in the UK. The study released last week found the number of people who read a quality newspaper declined from 50 to 20 per cent in the last 21 years. The report which has been conducted annually since 1983 confirms what has been apparent for several years: the decline is a generational affair. In 2006, 42 per cent of 18 to 27-year-olds read a daily paper at least three days a week, against 72 per cent in 1986. The latest study also found that the internet is not taking up the slack with only three per cent of those who do not read newspapers consulting news websites.

According to Roy Greenslade in the Guardian, it is this last fact that is more worrying. While Greenslade accepts that more people will be getting their news from non-newspaper web sources, he believes there is a growing disaffection with news consumption with little inclination to follow political matters. He quotes Strathclyde University professor John Curtice who says newspapers are no longer able to fulfil their role as a news provider to those with little inclination and exist only for the political classes. According to Curtice, politicians should stop worrying about the power of the press and start worrying about its weakness.

Those weaknesses are manifesting themselves also in the US and Australia. In the US newspaper readership has been in decline for over 30 years. David Simon, maker of acclaimed HBO series The Wire, is another who worries if the news has any inherent value left. He believes that newspapers have cut themselves in the throat by dumbing down. But his criticism applies to all media, not just print. He suspects an understanding of the events of the day is no longer a saleable commodity. “Was a newspaper a viable entity only so long as it had classifieds, comics and the latest sports scores?” he asked.

Australia meanwhile has suffered two recent journalistic hits of its own. In the last week, the Bulletin magazine folded, while yesterday came the surprise resignation of last year’s Gold Walkley winning journalist Hedley Thomas from The Australian. The Bulletin lost half its readership in the last ten years, and was losing money badly. Worse, the magazine had become an anodyne cipher which presented news in an objective, but turgid, fashion. As Mark Bahnisch put it “The Bulletin appeared destined to find a graveyard in dentists' waiting rooms.” Now it has been put out of its misery, but at the cost of news coverage in Australia.

Hedley Thomas’s resignation is another bad loss to Australian journalism. He left News Corp today to take a PR job with a Queensland gas company. Thomas broke the Bundaberg Dr Death story and won his top journalism award for his coverage of the Haneef affair which was a significant factor in the downfall of the Howard Government. According to an interview with Margaret Simons in Crikey, Thomas said his job was too stressful. In 2002, he and his family narrowly escaped a drive-by shooting at their Brisbane home. Thomas told Simons “There comes a time when you don’t want to deal with other people’s problems anymore. I get dozens of calls from people who want me to investigate something, rip offs and lawyers and so on, and I used to welcome those calls and opportunities. I am just concerned that I can’t relish it for another ten years”.

While Thomas has had enough, Simons is not convinced Australians in general have lost their zest for news. In The Content Makers, she quotes the 1999 research of political academic Murray Groot who found almost 50 per cent interest in news, up 15 per cent from 1984. She pinpoints the problem that Australia is under-reported. She says newsrooms are stretched and understaffed (Thomas would bear this out), show little innovation and are driven by what has repeatedly worked in the past. She says the real reason media outlets are becoming irrelevant is that they have ceased to provide useful information. The challenge for 21st century journalism is rediscover its sense of news values before it is washed away as a corporate corpse.
Posted by Derek Barry at 10:39 pm

The problem might also be that obsession with celebrity and infotainment.

It also does not help that journalists are increasing strawmen/women who appear ready to product place ideas and opinions for money.

But then perhaps Roy Greenslade is perhaps not the best person to quote given that he despises hie readership and ignores real journalism - as displayed in his piece aboutt he debate at the LSE.

Yes Greenslade undercuts his argument somewhat with his disparaging remarks about 'popular culture'.

Cultural elitism doesn't help solve the problem and smacks,as you say, of despising of his readership.