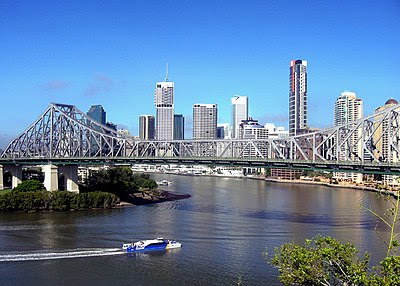 Brisbane is getting ready to vote again just four months after the federal election. This time it is the Brisbane city council elections which are scheduled for Saturday 15 March. Brisbane currently has a Labor dominated council in its 26 wards but has a Liberal mayor. I live in the eastern ward of Hamilton which has 27,000 registered voters. With the ward containing blue-rinse suburbs of Ascot, Clayfield and the eponymous Hamilton, it has long been considered a safe Liberal seat.

Although the last election was held in March 2004, there was a by-election for the Hamilton ward in October 2006 when Tim Nicholls moved to state parliament. David McLachlan retained the seat for the Libs in the by-election with 58 per cent of the vote ahead of Labor’s Anna Herzog (who is contesting again this year) and the Green’s Sam Clifford. Today, I caught up with the 2008 Greens candidate for Hamilton, Tristan Peach.

Born in 1980, Tristan Peach is a native of north Brisbane. He holds a bachelors and master’s degree in town planning. Peach is a committed activist and has been involved in many local projects including the Samford Transport Group, Cedar Creek Bushcare Group and the Nundah Positive Housing Project which looked at the affects of gentrification on the homeless in that suburb. He spent 4 years part time tutoring and lecturing at Queensland University of Technology (QUT) amd a year working as a development assessor for planning submissions. He is now devoted full time to sustainable transport submissions.

Peach was also the media spokesperson for the Communities against the Tunnel forum which fights against the controversial multi-billion dollar Transapex network of five tunnels across Brisbane. Peach is now treasurer of a new group called Community Action for Sustainable Transport which works in collaboration with the likes of Stop the Hale Street Bridge Campaign and the Queensland Conservation Council. Peach is also a guest lecturer in urban planning at QUT.

He has been a member of the Queensland Greens for one year but has been a supporter since 2003. He says they are the most progressive party in Australia and are community based rather than corporate funded. He said he was keen to work on local issues which matched his interests in urban planning. I ask him what was the mood of the people he had met while out canvassing and whether there was any sign of election fatigue just four months after the federal election. He said he didn’t see any signs of fatigue. The sense he got was that most people were relieved that John Howard was no longer in power. However he did acknowledge that most people were unaware that the election was happening.

The most popular local issue in the New Farm / Teneriffe area was the need for a local Citycat stop. Currently users need to take a cross-river ferry to Bulimba ferry stop which Peach says is a deterrent to use. He has set up a petition for Citycat services to stop at Teneriffe. He said there were many other local issues that people were concerned about. These included the removal of a river structure that was the roosting ground of white-faced herons and the growing problems of midges and mosquitoes faced by residents who live near the Enoggera Creek in the Windsor area of the ward. Some people believed that this problem has been worsened by the earthworks at the nearby North-South tunnel digging site. Peach said he enjoyed the challenge posed by local issues such as tree-trimming and keeping streets tidy. These he said “were issues you wouldn’t know about unless you talked to local people”.

Peach said his aim in this election was to build up the Green support base. This means building on the 3 percent swing which garnered a 15 per cent result in 2006. I asked him how the Greens could overcome the problem where the Brisbane council was entirely made up of Labor and Liberal members. He also saw a role for local decision-making groups and neighbourhood reps who would have a meaningful say and voting rights on ward issues. Peach said the people in Hamilton are intelligent and influential. He said putting a Green in council would mark a new era for the ward and would also be an exciting new era for the council. Otherwise, he said, all we could expect is more of the same from Liberal and Labour. “Electing a Green would be an exciting development,” he said. Even if you are not passionate about the environment, it would bring more accountability.”
Posted by Derek Barry at 7:22 pm

As soon as theres an election nearby all sense of progression and social responsiblity disappear.

I take your point about elections, Joe but what were those car friendly measures you mention?