Former Thai Prime Minister Thaksin Shinawatra arrived home today for the first time since he was ousted in a military coup 17 months ago. He landed at Bangkok Airport and was greeted by thousands of supporters who cheered, sang and waved placards proclaiming: "We Love Thaksin". The 58 year old Shinawatra responded with a traditional Thai bow before being whisked off by an even larger entourage of police to the Thai Supreme Court to answer the corruption charge over a land deal while he was in office.

Shinawatra was immediately released on bail of 8 million baht (about a quarter of a million US dollars). Bail will be revoked if he travels outside Thailand without the court's permission or does anything to interfere with his case. He faces several charges of corruption and abuse of power brought up by junta-appointed investigation bodies. Thaksin faces two charges of corruption which date to his time in office and separate charges of concealing assets. In addition, he and his wife Pojamarn face charges stemming from a Bangkok land deal and an alleged stock concealment plan. Shinawatra could receive a maximum of 15 years in prison.

The northern born Shinawatra became one of the richest people in Thailand by setting up telecommunications companies like Shin Corporation and Advanced Info Service before entering politics. In 1996 he formed a new Party: Thai Rak Thai (Thai love Thais). Their election platform (universal access to healthcare, a debt moratorium for farmers, and a development fund for all Thai villages) proved immensely popular and TRT swept to victory in 2001. His first few years in power were marked by massive economic growth in Thailand. He won another landslide victory in 2005 but by then the Thai economy was slowing down.

The crisis in 2006 started when the Shinawatra family sold its $2 billion stake in Shin Corporation. The Thailand Securities and Exchange Commission investigated the transaction but cleared the family of wrongdoing. With calls growing for his resignation, Thaksin called an election which was boycotted by the opposition. A Thai court ruled his subsequent win invalid. In September 2006 Shinawatra was deposed in a military coup while he was overseas.

The exiled Thaksin settled in London. In July 2007 he boosted his public profile in Britain by buying premier league football team Manchester City. He immediately spent big on the club bringing in former England manager Sven-Goran Eriksson to coach the team. Political analyst Thitinan Pongsudhirak of Bangkok's Chulalongkorn University saying buying this club is a shrewd move aimed at his homeland where millions are besotted by the English Premier League. "The Thai authorities didn't want to let this deal go through,” he said at the time. “If Manchester City start winning matches, people will go wild for Thaksin." 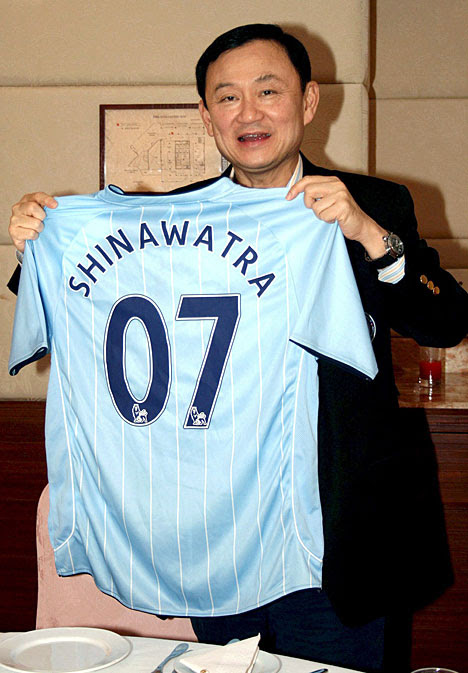 Manchester City have been reasonably successful and are currently eighth in the table. And Thaksin’s stocks has risen in Thailand. His allies in the People Power Party (PPP) won elections in December, raising expectations that Thaksin would come home. New PPP Prime Minister Samak Sundaravej gained power largely by using the former Prime Minister’s popularity in its election campaign. While Sundaravej downplayed problems posed by Thaksin’s return and urged his supporters not to flock to the airport to greet him, he did send PPP party officials to accompany Thaksin home.

Officially Thaksin remains banned from political activity and he has repeatedly claimed he has retired from politics. However, he is seen as the power behind Sundaravej and he still has a massive power base in the north-east of Thailand where his policies are popular with farmers. “I just want to go home to my family and thank them and everyone for their support,” he said on his return today. How long he remains this coy about his prospects, depends on how quickly he can end his legal woes.
Posted by Derek Barry at 9:47 pm