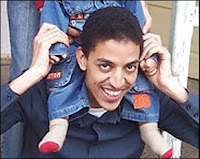 Moroccan man Fouad Mourtada has been jailed for three years for setting up a fake Facebook profile impersonating a member of the country's royal family. On Friday Mourtada was sentenced to three years jail and a fine of 10,000 dirhams ($US 1,350) after a court found him guilty of "usurping the identity of HRH Prince Moulay Rachid". The prosecutor and judge repeatedly reproached Mourtada for having “undermined the sacred integrity of the realm as represented by the prince".

According to the website set up by his family Help Free Fouad, Mourtada is a 26 year old IT engineer and a native of the town of Goulmima in the South Eastern region of Morocco. They say he is “a reserved and timid type” who created Internet friendships and was accustomed to participating in forums and exchange sites. They say he is “a Facebook user just like many young people around the world”.

Mourtada created the Facebook profile of the Prince as a joke. On 5 February, he was arrested in Casablanca on the charge of “villainous practices linked to the alleged theft of identity”. He was blindfolded and taken to a local police station where he was harassed and beaten unconscious. His family were allowed to visit him after a week where Mourtada told them he was "persecuted, beaten up, slapped, spat on and insulted." He continued: "I was also slammed for hours with a tool on the head and the legs."

His arrest and subsequent treatment brought a wave of protest by media and bloggers. Agoravox called Mourtada “a Martyr of the Net” and Le Monde Libere described the case as a “media lynching” pushed by the Moroccan royal family. Last week some Moroccan bloggers suspended their regular blog entries for 24 hours in protest at Mourtada's detention.

There is no precedent anywhere in the world for a person receiving a jail sentence for posting a fake Facebook profile. Fouad's fake profile was not malicious, and it did not in any way attempt to slander Moulay Rachid. The prince is the younger brother of Morocco's Head of State, King Mohamed VI. Mourtada admitted placing the profile of the Prince on Facebook but said he had done this out of admiration for him, not out of any wish to undermine the monarchy.

Two Amnesty International (AI) delegates attended the trial and AI released a statement yesterday issuing its concern. They say the hearing failed to satisfy international fair trial standards. AI said the main reason for the prosecution was the authorities' determination to clamp down on anyone deemed to be undermining the monarchy and what the prosecutor termed the "social and sacred values of Morocco." The court failed to investigate the alleged breaches of Mourtada’s rights during arrest and detention, and his allegations that he was ill-treated in custody and forced to "confess." AI called for a re-trial and for allegations of mistreatment to be “fully and impartially investigated.”

Moroccan-born author Laila Lalami writing in The Nation wondered how Moroccan police found out Mourtada's identity. Lalami said Mourtada did what millions of other people his age do every day: “create profiles, real or fake, on social networking websites”. Lalami said such spoofing was common. "There are fake profiles on Facebook for everyone from Brad Pitt to Mother Teresa, from King Abdullah to Osama bin Laden”, she said “There are 500 profiles for George W. Bush."

But criticism of the Moroccan royal family remains taboo. The French-based Reporters Without Borders annual report for 2007 said that investigating the role of the king and the royal family in running the country is the main reason journalists are prosecuted. Press law has many offences carrying prison sentences and journalists often have to pay very heavy fines and damages for offending the king, the monarchy, the nation, territorial integrity, God or Islam. According to Culture Maroc, it all boils down to the same problem: “Modern Morocco vs. the Morocco of the Middle Ages”.
Posted by Derek Barry at 7:55 pm