KBR in the kickback wars again 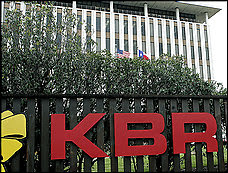 A former KBR contractor pleaded guilty last week to allegations that he conspired to receive bribes while working in Afghanistan. The contractor Wallace A. Ward was among KBR employees who conspired to receive bribes from drivers hired by the British Red Star Enterprises Limited. The drivers were supposed to deliver jet fuel to the airfield but were instead selling it. The drivers then bribed the KBR employees to prove documents falsely showing that the truckloads of fuel had been delivered to the airfield. Ward now faces a five year sentence while KBR issued a statement saying the company doesn't condone or tolerate unethical behaviour. The scandal is the latest to dog the former Halliburton offshoot which has been mired in controversy over its cosy long-term contractual arrangements with the US military.

KBR (formerly Kellogg Brown Root) rocketed to world attention thanks to its massive $2 billion plus contract to rebuild Iraq’s oil infrastructure. KBR’s massive army logistical support contract known as LOGCAP makes it virtually the newest branch of the US military. It is almost impossible to pick apart the boundary between the two and it is likely that no other company will again be able to compete with KBR for military logistic support given the vastness of the way it become intricately connected with the army, navy and air force.

It was founded in 1919 as a Texas road building company called Brown and Root. Its founding brothers Herman and George Root learned early in life how to influence public officials in order to get lucrative county contracts. They grew steadily in influence culminating in a long relationship with Lyndon Johnson that proved richly rewarded for both the Browns and Johnson. KBR moved from building roads to ships and then began supporting the war effort in World War II. They made big profits in Vietnam but it took its Iraqi involvement to put KBR in the public spotlight for controversy. Taken over by the oil company Halliburton in 1962, its political influence continued when Dick Cheney was appointed CEO in 1995. Cheney had no business experience – he was brought in purely for his influence in Washington.

In 1917 Herman Brown started his business in Texas with a couple of mules moving dirt and grading and paving roads. The demand for road was fuelled by the emergence of cheap cars. Determined to expand, he tapped his brother-in-law Dan Root for a loan. After paying off his creditors, Brown thanked his benefactor by renaming his company Brown & Root. Brown was joined in the business by his younger brother George who was a gifted salesman. Together the brothers lobbied the Texas Highway Department and used payoffs and kickbacks to get themselves a slice of the action.

Brown & Root became masters of a type of contract they were to perfect in Iraq. They would submit a low-bid contract and then having won, ratchet up the costs over time. The brothers moved the business to Houston where they survived the 1929 stock market crash by liquidating their promissory notes. The Depression brought a halt to road building and so Brown & Root had to expand to other unskilled labour tasks to survive. They did everything from repurposing war surplus equipment to hauling garbage for the city of Houston.

The company’s big break was the contract it won for the Marshall Ford Dam. Although the company had no dam building expertise and the dam itself was improperly sold as a flood relief exercise, Brown & Root won the contract by wooing the young local congressman Lyndon Baines Johnson who had the ear of President Franklin Roosevelt. The brothers used non-union labour on an illegal appropriation but relied on its lawyers and influence in Washington to push it through. The eventually dam contract of $17 million was the making of Brown & Root. In return Brown & Root funded Johnson’s initially unsuccessful Senate run and again his ultimate Senate success after World War II. A political and business alliance was formed.

Brown & Root won their first military contract as America headed towards war again. In 1940 they built a Naval Air Station in Corpus Christi, Texas on a “cost-plus” contract which guaranteed profits based on a pre-negotiated percentage. But while Brown & Root’s profits were high, they also gained a reputation for delivery, regardless of whether they were building a dam or a naval base. The end of the war saw a mad scramble firesale of surplus government assets and a consortium led by Brown & Root outbid the oil companies to buy massive pipelines known as Big and Little Inch that ran from the Texas oilfields to the East coast. Brown and Root diversified into natural gas and held a monopoly on supply to the east.

Brown and Root became instrumental in leading a group of Houston businessmen and politicians known as Suite 8F named for the room in the Lamar Hotel where the claque met. For more than twenty years nothing could be done in Houston without the support of this shadowy group. As well as the Brown brothers, the group contained Texan millionaire Jesse H Jones, real estate magnate Gus Wortham, banker James Elkins and iron manufacturer James Abercrombie. Lyndon Johnson was a regular visitor. This was an oil industry lobby group which became a genuine force in Washington. George Brown was appointed to the Space Council and he played a major role in convincing NASA to build its Manned Spacecraft Centre in Houston. Not surprisingly Brown & Root won the contract to build the centre.

Suite 8F suffered a rare defeat when it failed to put Lyndon Johnson into the White House in the 1960 Democratic race. He eventually agreed to become Kennedy’s running mate and became Vice President. Herman Brown died two years later aged 72 and Johnson eulogised that him as a “builder of his community, his country and his world”. Before his death, Herman had started talks with Halliburton to take over the company. The two companies seemed a natural fit and complemented each other’s strengths. Even though it was now a subsidiary Brown & Root fiercely maintained its independence.

With Johnson in the White House after Kennedy’s assassination, Brown & Root won a contract to do $400 million worth of military construction work in Vietnam clearing out the jungle, creating landing strips, dredging channels, and building bases. Brown and Root became a symbol of war profiteering with anti-war protesters. They could afford the criticism. By now they were the number one construction company in the US with sales of $1.6 billion. But the retirement of Johnson and the death of George Brown saw a downturn in their fortunes. In the 1980s the workforce declined from 80,000 to 20,000. They needed another war to turn around their fortunes. Iraq was to provide the excuse in 1990.

Halliburton won a Kuwaiti oil cleanup contract and Brown & Root won an additional $3 million contract to assess war damage. Back in the good graces of the government, Brown & Root found further work in Somalia in 1993. Their big pay day arrived in Clinton era with the Logistics Civil Augmentation Program (LOGCAP) Logistics Civil Augmentation Program (LOGCAP). A report commissioned by the Pentagon (and written by Brown & Root) suggested they use one contractor to handle all of its contingencies to provide logistical support in case of further military action. The authors of the report went on to win the bid called “the mother of all service contracts”.

Brown & Root became so integral to the army’s operations that when they lost the contract in 1997 to rivals Dyncorp the army found it impossible to dislodge Brown & Root from its work in the Balkans and carved out a new contract specifically for the area. In 2001 Brown & Root won the overall LOGCAP contract again, this time for ten years. By now it was known as Kellogg Brown Root (KBR) after it was merged with engineering company M. W. Kellogg Company which was also purchased by Halliburton in a merger with Kellogg’s parent company Dresser.

In his previous role of Defence Secretary under George Bush snr, Dick Cheney had created the conditions for KBR’s massive defence contract by pairing down the logistical wing of the armed forces. This not only freed up troops to do the fighting, it was also a handy PR tool whenever the US sent forces abroad as more contractors meant a more palatable troop number count. When appointed CEO, he got the company into the Balkans theatre of operations and earned $2 billion for the company. In his tenure, KBR’s government contracts doubled. But he also left problems. He claimed ignorance of the merger partner Dresser’s entanglement in Iraq’s Oil for Food program. When he left to become Bush jnr’s running mate, he left with a golden parachute payment and cashed in stock options of more than $30 million.

By 2001, KBR had their second Vice President in their pocket. They won the contract to build Guantanamo Bay detention centre, built Afghan bases in Kandahar and Bagram and were ready to follow the troops into Iraq. Unsurprisingly they won a $1.2 billion contract to repair the southern Iraqi oilfields. But there was trouble brewing. A Dresser subsidiary was fighting off bankruptcy over asbestos claims. KBR was under fire for its huge ‘no bid’ contracts and Cheney’s lingering ties to the company. They were accused in congress of inflating prices for importing gasoline into Iraq.

Halliburton responded to the crisis by moving their corporate HQ to Dubai and divesting ownership of KBR. In February 2007, Halliburton announced it had approved the plan to dispose of its KBR assets through a split-off exchange offer to Halliburton’s stockholders. Today KBR employs 50,000 people worldwide and remains the world’s largest defence services providers. Bush and Cheney’s “wargasms” have been very good for business.
Posted by Derek Barry at 10:14 pm

this is great info