Thomas Paine: These are the times that try men's souls 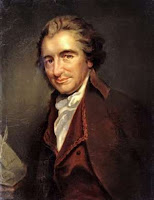 The recent 271st anniversary of the birth of Thomas Paine mostly passed unheralded apart from a letter to the editor of TC Palm, a small Florida newspaper. This is a poor lack of appreciation for one of the great figures of both the American and French Revolutions. This British born American patriot’s powerful, widely read pamphlet, Common Sense, written in the independence year of 1776, advocated an end to the colonial system and was an important intellectual boost to the baby republic. Paine was also a great influence on the French Revolution. He wrote the Rights of Man in defence of the Revolution and served in the Assembly before being arrested in the Terror. He returned to the US on the invitation of then president Thomas Jefferson and died a hero in New York in 1809.

Thomas Paine was born in Thetford, Norfolk on 29 January 1737. He grew up in an environment of modest poverty which did not prevent his parents from sending him to the local grammar school. Paine was technically brought up in his mother’s creed as an Anglican, but his father's Quakerism left an indelible impression and was instrumental in forging his ideas about egalitarianism. His father also objected to his son’s learning Latin at school because it was ‘popish’. With Latin the lingua franca of intellectuals of the day, this left Paine with the view of an outsider. Paine was later to quote “I scarcely ever quote; the reason is; I always think.”

Paine left school at 13 and moved to London to work as an apprentice garment maker. He worked as an exciseman and then schoolmaster. He became familiar with the new science of Newtonian mechanics. He married only for his young wife to die in labour. Another job with the excise board brought him to the Sussex town of Lewes. Here he met another Quaker Samuel Ollive, a tobacconist, who aroused Paine’s interest in politics. Paine was elected to the local municipal body, the Council of Twelve and quickly became a local celebrity as a vociferous member of the discussion-cum-social Headstrong Club.

In 1773 he distributed his first pamphlet, “The Case of the Officers of the Excise” arguing for higher pay based on the high cost of living at the time. Paine pointed out that to underpay excisemen invited corruption. His case for democracy rested on the principle the rich did not know what it was like to be poor. “There are habits of thinking peculiar to different conditions,” he wrote. “And to find them out is truly study mankind”.

His visits to London to lobby for the cause of excisemen brought him into contact with Benjamin Franklin. Paine was fascinated by Franklin’s experiments with electricity and Franklin in turn was impressed by the younger man’s eloquence, talent and self-education. Paine left for America with a letter of recommendation from Franklin who described him as “an ingenious, worthy young man”. The year was 1774 and Paine was then 37 years old.

Paine arrived in Philadelphia to find a city electrically charged with pre-revolutionary fervour. In England he was known as a conversationalist; suddenly in America he found his vocation as a journalist. He wrote in a number of Pennsylvania journals about black emancipation, justice for women and cruelty to animals, all from a humanitarian standpoint. He was one of the first in America to demand the end of slavery. But it was his attitude to independence that brought him a national audience. In January 1775 he wrote in support of the right of the colonies to control their own affairs.

When fighting broke out later that year, no one really expected that full independence would result. It took Paine’s January 1776 pamphlet “Common Sense” to electrify that sense of growing republicanism. It attacked not only George III’s policies in America but also the monarchy itself. He wrote that a hereditary monarchy was wrong in principle and harmful in practice. He wanted a strong central government and prophesised that a free and republican America would have no argument with European nations. Common Sense’s impact was immediate and tremendous. At the time it looked as if Britain would defeat the republicans but the weight of Paine’s support for Washington was crucial psychological support for the rebels.

In 1777 Paine was possibly the first person to use the term “United States of America” and saw it as a society that would expand its economy in the interest of all productive classes. In 1782 as the war drew to an end, he was employed by the new American government as an official propagandist. He found time to devote himself to the design of an iron bridge and a smokeless candle. In 1787 he sailed to France to promote his bridge ideas.

When he arrived in Paris he became quickly aware of the mood for political change while he also saw the mood of distrust of his native Britain. He crossed to England where he was well received by the Whig opposition. He was in London when the French Revolution broke out in May 1789. He returned to France in September and devoted his time equally to politics and furthering his bridge ideas. He went back to England in 1790 where he was disturbed by Edmund Burke’s ferocious attack on the Revolution in his speech to the House of Commons. Paine’s reply was part one of The Rights of Man in 1791.

It was a strident defence of the Revolution which defended the authority of the people. Britain became polarised in camps for and against Paine. He returned to Paris where he found his pamphlet had caused ructions too. In 1792 he published the second part which was an even more explicit call to revolution. He attacked hereditary government as tyranny. Britain issued a Royal Proclamation against this “wicked seditious writing” and summoned him to appear in court. Paine fled back to France where he took up a seat of the National Assembly despite speaking no French.

His friends were the Girondists but they were out of favour after war broke out in April 1792. Louis XVII was executed in January 1793 despite Paine voting against it in the Assembly. He was opposed to it because of his humanitarianism and the fact Louis had been an ally of the young America. Most of all, Paine was too good a propagandist not to realise the impact the execution would have in the outside world. He was arrested for his rejection of the vote and imprisoned at the Luxembourg. He completed his next major work from prison and smuggled it out to a friend.

The book, the Age of Reason was an anti-clerical work devoted to the idea of refuting the Bible as the word of God. It was pure Enlightenment but it didn't stop him from rotting in a Jacobin prison waiting for the end of the revolutionary regime. He never forgave his former benefactor Washington for failing to use his influence to get him released. He was finally released after pressure from Jefferson in November 1794. Paine’s last important work “Agrarian Justice” appeared three years later and linked his economic ideas with his views on politics and religion.

This book took Paine to the door of socialism but it was a threshold he never crossed. In Agrarian Justice, Paine said the poverty of the majority was a direct result of civilisation, the evils of which included an ever-growing national debt. But it would take others to make the next step to define socialism, such as Thomas Walker, Robert Owen and the Chartists. All of them looked back with a debt of their own to Paine. While the 20th century has not been so kind to his reputation, his critical role in the two great revolutions of the 18th century leaves a giant footprint. As Henry Collins wrote in the introduction to Rights of Man, Paine’s ability to foresee some of the revolutionary implications meant not only did he speak for his time but also “through it, to our own”.
Posted by Derek Barry at 10:23 pm

I was wondering if you could tell me the artist of the French Revolution painting you have in this post? I can't seem to find the info online anywhere!

Thanks for your recognition of Paine. He was a highly influencial individual who deserves to be remembered. Your post proved highly informative and useful.

'He died a hero.' Really? He died neglected and despised by the people he had inspired. His local church in Bordentown refused his burial and he was interred on his own land. Only two persons accompanied his coffin. Two of them were ex-slaves.