The one about the archbishop, the media and Sharia 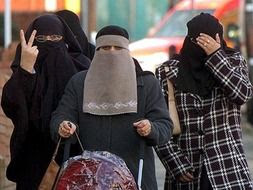 British newspaper the Daily Express printed this picture (left) on its front page yesterday. The three women were snapped for a totally unrelated story about the controversy that has erupted in the wake of Rowan Williams’ “Sharia” speech earlier this week. The preferred reading of the Express was these women represented the future hostile face of Islam in Britain. Nevertheless the women were not giving the finger to Britain but to the intrusive photographer who was harassing them as they went about their perfectly legal business. There hasn't been sumptuary laws in Britain since the 16th century and the women are free to wear burqas if they so desire. In any case as one commentator asked “Is there anything more British than the two-fingered salute to authority? She looks very much like the rest of us”.

The other key point, of course, is that the women also had absolutely nothing to with the story. They were just a handy stick to use to show the dangerous “otherness” of Islam. That this fear is a stick is shown by Britain's second largest selling newspaper the Daily Mail which had a poll for readers to decide “which of these men pose the bigger threat to Britain’s way of life?” While there are several likely candidates to fulfill this intriguing threat (politicians or media owners perhaps, such as billionaire Viscount Rothermere, chair of the Daily Mail and General Trust plc, one of the largest media companies in the UK), the only choices offered in the poll are two bearded clerics: Abu Hamza and Rowan Williams.

Both are considered dangerous demagogues in reference to Islam. Abu Hamza al-Masri is a leading British radical Islamist whose activities in the Finsbury Park mosque led to intense police and media scrutiny. Demonised for his apparent preaching of jihad in the homeland, it didn’t help his image he had a sinister-looking hook in place of his left hand. Hamza’s own lawyer Edward Fitzgerald QC said Hamza was “probably the most frequently abused and ridiculed figure” in Britain.

Though perhaps he has relinquished that title for the moment. If Abu Hamza was the media’s Blackbeard with his pirate’s hook, the new villain is the snowy whitebearded mild-mannered Rowan Williams. But Williams is not a Muslim. He is in fact, the current Archbishop of Canterbury, metropolitan of the province of Canterbury, Primate of All England, senior archbishop of the Church of England and the symbolic head of the worldwide Anglican Communion.

Williams’ offence was to tap into a fear in the Western psyche about the takeover by Islam. Muslims are a minority in Britain but they are outbreeding other sectors of the population. Combined with a steady steam of immigrants from Muslim countries and the sense of “other” they generate when practicing their culture, any suggestion that their “power” may increase causes howls of protest from Britons feeling vulnerable about their culture and their place in the world. Britain is a Christian country, they say. Actually, like most Northern European countries, Britain is a post-Christian country. And Williams, more than most, is aware of this.

Williams has often been in the headlines for some controversial statements about various aspects of Christianity. But when he moved on to Islam, the media went ballistic. In a speech to lawyers and jurists at the Royal Courts of Justice on Thursday, the Archbishop examined the intertwining of civil and religious law in England and suggested that some aspects of Sharia law might be practical in terms of solving cultural questions without damaging the civil law of the land. In the last two days this speech has caused a political and social firestorm. While his subject matter was learned and thoughtful, it was doomed from the moment when he said the magical word Sharia.

While Williams has claimed to be shocked by the reaction, he prophesised it himself in the early part of his speech when he quotes Tariq Ramadan’s Western Muslims and the Future of Islam:

“In the west the idea of Sharia calls up all the darkest images of Islam...It has reached the extent that many Muslim intellectuals do not dare even to refer to the concept for fear of frightening people or arousing suspicion of all their work by the mere mention of the word”


Williams’ main point in the speech was that Sharia was a method of jurisprudence governed by revealed texts rather than a single system. He said more latitude should be given in law to rights and scruples rooted in religious identity. Religious groups could provide cultural clarity in issues related to marriage and inheritance much as the Islamic Sharia Council already do. But the media were only interested in the "darkest images of Islam".

And so the evidence that Williams supplied in the speech, such a similar dispensation that already exists for Jewish law (Beth Din) was lost in the stampede to criticise Williams. Reuters reported that bastion of British tolerance The Sun saying yesterday: "It's easy to dismiss Archbishop of Canterbury Rowan Williams as a silly old goat. In fact he's a dangerous threat to our nation." The Daily Express thundered “Muslim laws must come to Britain” before weaseling out with a passive voice “he was accused” without appearing to accuse him themselves. Upmarket was no easier on Williams. The Times said Williams was dangerous and “must be resisted”.

Even the left joined in the criticism. The Guardian said Rowan Williams has a knack for creating problems where none yet exist. The Independent said “let the backlash commence” and put Williams' error as the assumption he had the same intellectual freedom as the leader of a major church that he had when he was merely an eminent theologian. Spiked's editor Brendan O'Neill said Williams (whom he personally attacked as a "smug, guitar-strumming religious leader with a social-worker voice") claimed the adoption of some aspects of Sharia law in the UK is "inevitable" when the only inevitability mentioned by Williams was to “mutual questioning” and only perhaps mutual influence towards change.

There were a few voices in support. On BBC Radio Wales Kim Fabricius launched a spirited defence of Williams in a radio interview with Sunday Mail's editor Peter Hitchens and made the point that if anyone had actually taken the time to read the speech, then there wouldn’t be an issue. Australian blogger and theologian Benjamin Myers defended Williams saying the speech was a “dense, thoughtful, informed, and highly nuanced reflection…on the complex relation between law, citizenship, and the identity of religious communities.” Myers made the very good point that Williams wants us all to think more about the issue. “But thinking is hard work,” says Myers. “It’s neither as enjoyable as a good lynching, nor as satisfying as a posture of moral indignation.”

The Church Times columnist Andrew Brown drew a comparison between Williams and his more worldly predecessor: "The trouble with Rowan Williams is that he can never remember that he is Archbishop; the trouble with George Carey was that he could never forget." Williams clearly has more important things on his mind than merely being an archbishop. If he has upset this many people, it is likely he is doing something revolutionary. As the conclusion to his speech says “if we are to think intelligently about the relations between Islam and British law, we need a fair amount of 'deconstruction' of crude oppositions and mythologies.” Replace the word “British” with “American” or “Australian” and the sentence remains valid.
Posted by Derek Barry at 10:49 pm

IMHO Dr. Williams is insane and/or evil. He should be put out to pasture ASAP. He is a traitor to England and to all Christians and freedom-loving people everywhere; and he deserves to be vilified for the rest of his life and beyond.

absurd thought -
God of the Universe says
the Archbishop is correct

little by little allow
mad mullahs to call the shots


absurd thought -
God of the Universe says
freedom is bollocks

religious ones are special
give them lifetime positions