David Cameron has admitted that despite taunting Gordon Brown for pulling out of a snap autumn election, the Conservatives would probably have gone down to another defeat had it been called. The remarks are in stark contrast to his boasts last year that claimed they would have won the election if called. Cameron made the admission in a BBC documentary by former Tory Cabinet Minister Michael Portillo. In the documentary Cameron told Portillo an October election would have been tough. When Portillo asked him if defeat could cause a party split between traditionalist Thatcherites and Cameron’s left wing faction, he replied: "There are certain questions starting with 'if' that I never answer - and that's one of them."

Despite recent gains by Cameron, his comments show how much his party has struggled to come out of the giant shadow cast by Tony Blair’s landslide Labour victory in 1997 that ended 18 years of Conservative rule. In their landmark study of the effects of communication on British voting: “On Message: communicating the campaign”, a team of researchers led by Harvard’s Pippa Norris have provided a comprehensive and original analysis of the impact of political communications during election campaigns.

The sheer size of Labour’s 1997 victory surprised everyone including Tony Blair. The conventional account stressed Blair’s victory was a result of the radical party rebranding in the image of New Labour. Chief strategist Peter Mandelson was credited as the primary architect of the win. Started in the 1980s under Neil Kinnock, the project involved party modernisation, by-passing radical activists and the abandonment of traditional socialist policies in favour of the ‘third way’ so beloved of Bill Clinton. Above all, according to this view, it was the deployment of strategic communications that conveyed the image of New Labour to the people.

Their assiduous wooing of the press paid off as nearly all the newspapers backed Labor including the bellwether The Sun. In 1992, The Sun backed John Major and later proudly proclaimed “it was The Sun wot won it”. The prominence of Labour’s spin doctors and the obvious movement in the endorsements of several major newspapers gave the researchers the opportunity to answer two big questions: Firstly are party strategic communications important for electoral success and secondly, do news media have a powerful impact on election results?

The earliest political researchers such as Walter Lippman believed that the effects of mass communication were pervasive. However key 1940s research by Paul Lazarsfeld showed that theories of propaganda had exaggerated their effect and were useful only as a reinforcement tool. Today, many schools of thought stress the importance of “pocket-book” voting as demonstrated in the phrase “It’s the economy, stupid”. To that end, the argument suggests the Conservatives lost the 1997 election as early as “Black Wednesday” in 1992 with the currency crisis following Britain’s withdrawal from the Exchange Rate Mechanism. The Tories' reputation as sound economic managers was in tatters and they never subsequent recovered in the polls.

Yet this theory fails to take into account the subsequent recovery of the British economy or the fact that election took place a full five years later. In the run-up to the 1997 election, Britain was in the middle of a boom and the Major government’s economic record was healthy. But the press had turned against Major. In 1993, a succession of scandals involving Conservative ministers created headlines while the party suffered internal splits over its attitude to Europe and the Maastricht Treaty. In 1997 six of Britain’s ten dailies endorsed Labour in the election.

Labour had a very effective election machine with its media management centre at Millbank Tower modelled on the war room of the Clinton campaign. In its tight inner core were Mandelson, Blair, Gordon Brown, press secretary Alastair Campbell, pollster Philip Gould, Lord Irving of Lairg, chief of staff Jonathan Powell, and Blair’s personal assistant Anji Hunter. Gould had conducted a constant program of focus groups since 1994 tackling Labour’s weaknesses on taxation, trade unions and crime. They launched a dry run manifesto in 1996 to iron out any policy kinks. This allowed them to run a safe and bland campaign during the election itself. The other major Labour success was a recruitment drive that saw membership increase from 261,000 in 1991 to 405,000 in 1998. Meanwhile Tory membership dropped substantially while its politicians brawled among themselves and launched a negative campaign against Labour.

While the Tories bickered and sent out messages of fear, Labour marked out the territory to be fought over in the coming election. The Tories fought on three fronts: firstly to convince the electorate that life was better under them, secondly to warn about the dangers of Labour and thirdly to counter Labour’s message of “time for a change”. It was this last front that was to prove most difficult for the 18 year old government. Its only effective option was a negative campaign in the hope voters’ fears of Labour would outweigh their boredom threshold of the current government. Their election posters of Blair’s “demon eyes” attracted widespread criticism and crucially, failed to swing opinion polls.

Meanwhile Labour campaigned on “hope not fear” and Blair had transformed his party. He told the trade unions they could expect only “fairness not favours” and publicly expressed his admiration for Margaret Thatcher saying there would be no substantive repeal of her trade union legislation. They also portrayed themselves as fiscal conservatives. Blair courted the owners and editors of the tabloid press, convinced their hostility in 1992 had proved damaging. Nevertheless, the researchers showed it was the Liberal Democrats who ran the most internally coherent campaign, probably because they were the least scrutinised by the media.

With the opinion polls remaining flat and in Labour’s favour there was little media interest in the ‘horse race’ component of the 1997 election. This may also have been impacted by the 1992 election where the polls were badly caught out, as they were predicting a Labour win. Instead the media concentrated on strategy and political activity on the campaign trail. There was little correlation between media agenda and party agenda. Though the parties tried hard to get their message across, the press followed its own priorities with such headlines as “Hamster eats through car” (The Sun, 12 April) replacing constitutional reform or the agricultural policy.

John Major called a six week election campaign to try and claw back some ground. This was twice as long as a typical British election period and it had a negative effect on the public. Although the BBC News added an extra 20 minutes coverage each night, its audience went down. ITN also lost audience share during the six weeks. Public interest flagged during the long and uneventful campaign but came back to life spectacularly on the night of the election itself. 12.7 million (one third of the electorate) watched the election special. As Labour’s landslide became obvious, 5.2 million remain glued to the TV at 1.45 in the morning. Audiences between 1.4 and 6.5 million watched all next day as Blair went to the Palace and emerged triumphant to throngs in Downing St.

Yet the researchers failed to find evidence television influences voters. British television aims for neutrality in three respects: directional coverage (favourable versus unfavourable messages about a party), stop-watch coverage (how much time is devoted to a party) and agenda coverage (how far coverage focuses on issues that favour party positions). The researchers found no evidence any imbalances in these coverage factors influenced the election. The three major parties received broadly similar treatment in the broadcasting media.

Similarly they could find no evidence to support the claim the transfer of support of The Sun was decisive. The researchers’ analysis showed The Sun’s conversion did not bring new recruits to Labour nor new readers to The Sun. Other newspapers also changed their view between 1992 and 1997. The Times advised their readers to vote Eurosceptic (in practice mostly Tory). The Independent switched from being neutral to supporting Labour. The Star also switched from Conservative to Labour. The difference all these papers made was to mobilise their existing readership to vote in a certain way. 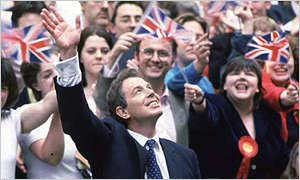 In the end, the researchers concluded all the sound and fury of electioneering did not signify much at all. In this respect the parties would have been better off going on holidays for six weeks and giving one pound to each British citizen for the £54.1 million spent on the campaign.

Yet party campaign managers, advertising consultants, and market researchers in all parties believed the campaign was a vital component in Blair’s victory. Philip Gould said that right to the end, the 1978 Winter of Discontent haunted the campaign and it wasn’t until the final Sunday before polling he was convinced Labour were going to win. But the researchers say the win was not contingent on either long campaign (the last year before the election) or the official short campaign (the six weeks prior). Labour led steadily in the polls since September 1992 around the time of Black Wednesday. In the view of Pippa et al, it was the stupid economy, after all.
Posted by Derek Barry at 11:16 pm

The Sun's influence has often been overstated. There was a poll in the 1980s which made it clear that most of its readers considered it to be a Labour paper!

This was satirical skletch show on the night of the 97 election. Don't overanalyse it its just laugh!