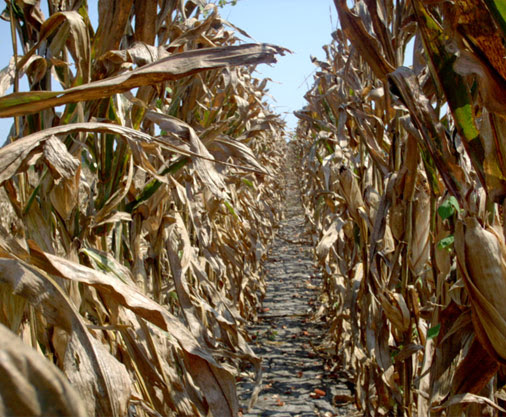 Two damaging new studies released last week have shown ethanol is even worse for the environment than fossil fuels. The studies found that almost all biofuels currently in use cause more greenhouse gas emissions than conventional fuels if the full emissions costs of producing these so-called “green” fuels are taken into account. The destruction of the ecosystems converted to cropland releases greenhouse gases into the atmosphere as well as reducing the amount of carbon sinks as the cropland also absorbs far less carbon than the land it replaced.

The peer-reviewed Science journal printed both studies on ethanol and other biofuels. The first by ecologists at Princeton, the Woods Hole Research Center, and Iowa State University was the first ever comprehensive review of the environmental consequences of increased biofuel consumption. It found that over 30 years, use of traditional corn-based ethanol would produce twice as much greenhouse gas emissions as regular gasoline. The second study by Nature Conservancy along with University of Minnesota researchers, found that converting rainforests, peatlands, savannas or grasslands in Southeast Asia and Latin America to produce biofuels will increase global warming pollution for tens to hundreds of years.

The key finding of the studies is that global production of biofuels results in new lands being cleared, either for food or fuel. Land use had not previously been taken into account in ethanol studies. The end result is massive carbon debt. Even in the best case scenario of Brazilian sugar cane grown in scrubby savannahs, a carbon debt is created which takes 17 years to repay. The worst case scenario is Indonesia palm oil displacing tropical rainforest growing in peat which invokes a carbon debt of 423 years.

The process of turning plants into fuels causes its own emissions especially in the areas of refining and transport. The result is bad maths for fans of ethanol. Grassland clearance releases 93 times the amount of greenhouse gas that would be saved by the fuel made annually on that land, said Joseph Fargione, lead author of the second paper, and a scientist at the Nature Conservancy. “So for the next 93 years you’re making climate change worse, just at the time when we need to be bringing down carbon emissions.”

The US is making the problem worse by heavily subsidising the ethanol industry. Already subsidised to the tune of $3 billion each year, the gravy train is about to get even richer. Iowa is the centre of the industry and state farmland values are up 18 percent in the past 12 months, according to Federal Reserve Board surveys, making paper millionaires of farmers owning more than 200 acres. Now a bill recently passed in Congress will provide another whopping $10.5 billion to the industry regardless of prices, profits, yields or weather. "A farmer's best friend in Iowa is the energy bill," said Bruce Babcock, a professor of economics at Iowa State. "What do you need the direct payments for? It's money for nothing."

Interestingly however, Babcock refused to sign off the first report which was co-authored by several economists at Iowa State’s faculty in the centre of the corn-growing belt. The study was based in part on a model developed at the University's Center for Agricultural and Rural Development for estimating changes in global crop production. Babcock claimed he was not sufficiently comfortable with the study's methodology because it relied on outdated land-use data from the 1990s. Nonetheless he agreed with the study's fundamental premise, that increased use of biofuels would boost commodity prices and encourage more crop production.

Biofuels expert Michael O’Hare at The Reality Based Community reiterated some of these points about to growing emissions. Firstly as more corn is used to make ethanol, the corn used is no longer in the food and feed corn market. This causes corn prices to increase which in turn is likely to stimulate the demand to grow more corn. Corn growing will intensify with additional fertilization which generates the potent N2O greenhouse gas. This increase will also impact land use for other crops which may make it more profitable for ranchers to turn more forest into farmland, further adding to greenhouse emissions.

Consumers are paying for ethanol subsidies with increased grocery prices. Production of ethanol also means we avoid looking at the longer-term problem: how to reduce consumption of transport fuel. Biofuels are an increasing extravagance and seem only to exist as result of lobby group pressure for those getting rich on the subsidies. As George Monbiot says “there is no such thing as sustainable biofuel.”

Biofuels cause severe greenhouse problems and a land-grab for farmers desperate to get in on the act. Where land is not available, food production suffers. As Monbiot again puts it “every time we fill up the car, we snatch food from people's mouths.” Ethanol is a costly and criminally inefficient solution to our energy problems. According to Minnesota's Republican state senator David Hann, "ethanol is bad science, bad environmental policy and bad economic policy." Now the scientists have offered proof to show Hann is right. Its time to end the cornball.
Posted by Derek Barry at 8:55 pm

Only changes in behaviour will substantially reduce the impact we have on the environment. More (and better) public transport, smarter urban design, walkable neighbourhoods, rail freight rather than road freight, etc. There are many other positive externalities from these shifts such as cleaner air, higher levels of public fitness, more engagement with one's community, fewer traffic accidents.

People who live huge distances from their workplace drive me crazy, especially when they buy special lightglobes to reduce their carbon footprint.

they are kidding themselves.

beef production consumes massive amounts of water, and none of it is for the poor beasts to actually DRINK.
the carbon footprint nongs should:
Only eat meat once per week,
Live where they can walk to work, and
Not take holidays in JET planes.
They all have about 40 of those green bags though.
eejits.