Save the Children report paints shocking picture of child mortality

Save the Children UK have released a new report that says that nearly ten million children die worldwide each year before they reach the age of five. The figures get worse as the children are younger. Four million of these die within the first 28 days of their life. Three million die in the first week and two million die on the day they are born. An incredible 99 per cent of all these deaths occur in developing countries. The report also contains a new 'Wealth and Survival Index' which compares child mortality to national income per person. This shows which nations are squandering their resources and Angola is ranked as the worst offender.

The report (pdf) blames three major causes for child deaths. Firstly, poor access to treatment and prevention means for major diseases such as pneumonia, measles, diarrhoea, malaria, HIV and AIDS. Secondly are infrastructure factors such poor health systems, undernutrition, lack of clean water and female illiteracy. The third factor, says the report, are the outcome of political and policy choices that are the responsibility of governments and other agencies. Bad governance, violent conflict and worsening environmental trends are additional underlying causes that profoundly impact children’s survival prospects.

The countries with the worst child mortality rates are among the world’s poorest and to have experienced war or violent conflict, such as Afghanistan, Angola, Chad, the Democratic Republic of Congo (DRC), Liberia and Sierra Leone. Five countries: India, Nigeria, DRC, Pakistan and China account of half of all deaths of children under five. Sierra Leone has the worst mortality rate, closely followed by Angola. Afghanistan is third worst and the only non-African country in the top ten. But on the Wealth and Survival Index oil-rich Angola is considered the worst offender. Although it now has a per-capita income high enough to put it in the "middle income" category, 20 percent of all Angolans still die before their fifth birthday.

Angola is still recovering from a 27 year civil war which ended in 2002. The former Portuguese colony was supported by the Soviet Union after independence in 1975. However they faced a long and debilitating war against Unita rebels backed by the US and apartheid-regime South Africa. After several broken ceasefires, it took the death of Unita leader Jonas Savimbi to bring the rebels to the table. However a separate struggle still remains in the enclave of Cabinda where 60 per cent of Angola’s oil resides. There have also been strong allegations that oil revenues have been squandered through corruption and mismanagement. Most Angolan still live in desperate poverty on less than $1US a day. The Index shows that Angola’s child mortality is strongly related to grossly unequal distribution of wealth.

Angola’s problems are not unique in sub-Saharan Africa. A child’s risk of dying on their first day of life is about 500 times greater than their risk of dying when they are one month old. The first few hours of a baby’s life are therefore critical, but far too often basic steps that could save the life of a child are not taken. A 2007 study in Ghana showed that 16 percent of neonatal deaths could be prevented by breastfeeding infants from birth. That figure rises to 22 percent, if breastfeeding begins within one hour of birth. 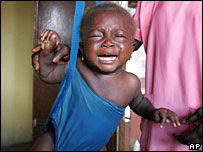 With two million victims annually, pneumonia is the largest single killer of children under five and is responsible for more deaths than AIDS, malaria and measles combined. However the underlying cause is malnutrition. Children without food do not have a strong immune system, and are unable to defend themselves against diseases. Pneumonia can be treated through community diagnosis and the use of antibiotics. However many poor countries do not have access to such successful antibiotics as Cotrimoxazole and Amoxicillin. In the 1990s, just one in five children who developed pneumonia was treated with antibiotics. Costs have dropped all over the world but the price is still beyond the means of most poor people.

Save the Children’s director of policy David Mepham concludes that a child's chance of making it to its fifth birthday depends on where it is born. But he disputes this is beyond human control. While poverty and inequality are consistent underlying causes of child deaths, all countries, even the poorest, can cut child mortality if they pursue the right policies and prioritise their poorest families,” he said. “Good government choices save children's lives but bad ones are a death sentence.”
Posted by Derek Barry at 7:22 pm