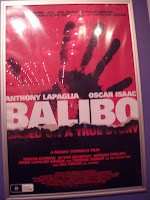 At the end of August East Timor celebrates the tenth anniversary of the remarkable referendum that would lead to its independence a year later. It was a stunning achievement for a country that had been forcibly occupied by Indonesia for 24 years after being abandoned by former colonial masters Portugal. The story of the fall of East Timor in 1975 is also one of Australia’s most shameful moments in foreign affairs and one that does no credit to either the Labor or Liberal governments that straddled the invasion period.

Tonight I went to the closing night of the Brisbane International Film Festival to see an important film about the period. Balibo (which today won two of BIFF's five jury prizes) tells the story of the five Australian and New Zealand television journalists who were killed at the border town for which the film is named. Balibo also tells the story of freelance reporter Roger East who was killed in Dili when he tried to find out the fate of the original five. All six were executed by Indonesian invaders a fact not admitted by Jakarta to this day. The official line is that the Balibo five were killed in “crossfire” while there has never been a satisfactory explanation for East’s death. Movie director Robert Connolly spoke to the audience of his desire for justice for these men before the start of the film and reiterated the point that this was an unashamedly political picture.

The lead character in Balibo is the sixth man, Roger East, played by Anthony LaPaglia who also produced the film. East was a Darwin based journalist in his early 50s who had served in the navy in World War II and covered many conflicts across the world as a journalist. As the Indonesian military build-up grew in late 1975, East was paying growing attention to what was going on across the Timor Sea. In October he was contacted by Jose Ramos Horta (played with great flair by American actor Oscar Isaac) who wanted him to set up a news agency in Timor to counteract Indonesian propaganda. East was reluctant but took the job when he heard that five journalists working for Channels Seven and Nine had gone missing in Balibo.

East arrived in Dili early the following month and on 10 November he scooped AAP and Reuters when he published eyewitness accounts of the death of the five journalists. The story of the five is interspersed with East's story in grainy flashbacks. According to the film East and Ramos Horta went to Balibo together but there is no evidence this actually happened. East did intend to travel to the front line but in the end the front line came to him. He stayed at the waterfront Hotel Turismo and refused Fretelin pleas to move to the rear of the town where he could escape to the mountains. The hotel was too handy to the telephones out of the country. So East was caught out when the invasion happened.

On 6 December, US President Gerald Ford and his Secretary of State Henry Kissinger visited Jakarta where they gave Indonesia the green light for the overthrow of the “Communist” Fretelin government. The general invasion of East Timor "Operation Komodo" began a day later with parachute drops of Indonesian troops into Dili. At 7am, East left the hotel and went to the nearby Marconi communication centre. He contacted Darwin to say that troops were in the city and the airport had been taken. East also said he expected the communication centre to fall soon. As Desmond Ball and Hamish McDonald’s book “Death in Balibo, Lies in Canberra” says, this communication probably cost East his life. A Timorese misson sent to rescue him failed when it encountered heavy Indonesian resistance.

In the film Balibo, East was captured in the communication centre, but this is contradicted by Ball and McDonald’s account. They say he hid out in Dili for most of that day and night. However he was eventionally arrested either during the night or early the next morning and taken to the port. At 8am, eye-witnesses saw him with his hand tied behind his back with wire at the side of the pier. He was executed by rifle fire. His body floated in the water alongside dozens of others who were either associated with Fretelin or picked out because they were Chinese.

The newly installed Fraser Government followed the lead of Whitlam and did their bit to help Indonesia by confiscating pro-Fretelin transmitter equipment near Darwin. Over 130,000 people would die in the 24 bitter years of fighting that followed. But the Timorese never accepted their status as Indonesians and eventually wore the invaders down. Australia would eventually restore some of its reputation in Timor with its lead role in restoring peace under the UNMISET mission.

But Connolly and LaPaglia’s film is determined to get justice for the six Australians who died in the invasion. On the weekend LaPaglia said the filmmakers felt a responsibility to the families of the dead journalists. "For us to make a crap movie about their loved ones would have just been rubbing salt into the wound, so we took a great deal of care - assembling the script and cross-checking all the facts,” he said. “That's why it took seven years.” Despite it not quite being the "true story" it promises to be, the end product is well worth the wait.
Posted by Derek Barry at 12:25 am

* Scenes From An Occupation, by award-winning film maker Carmela Baranowska, which covers the last 6 months of the Indonesian occupation.
* Doctors of Tomorrow, a documentary made by Tim Anderson about the role of Cuban doctors in building East Timor's health care system.