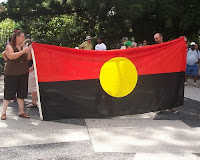 Photo by
David Jackmanson CC BY 2.0
Australian politicians and media have adopted a typically hostile and defensive pose in response to the UN High Commissioner for Human Rights' considered statement on Indigenous issues released on Thursday. The hostility was uncalled for. James Anaya, the UNHCR special rapporteur on indigenous issues, has issued a thoughtful report which civilly applauded Australian efforts to improve human rights and conditions in Aboriginal and Torres Strait Islander (ATSI) communities while saying much more needed to be done.

Anaya, an American legal scholar, released his statement after spending 11 days in six states and territories. He met with Government authorities, representatives of indigenous communities and organisations, and other stakeholder groups. He said he was impressed and inspired by the forward-looking “strong and vibrant” nature of indigenous culture he saw despite having endured tremendous suffering due to “historical forces and entrenched racism”. He said those forces are still relevant today with Indigenous people still lagging far behind in quality of life indicators such as life expectancy, basic health, education, unemployment, incarceration, treatment of children, and access to basic services.

Anaya also praised the “close the gap” federal initiatives and said these programs needed to be improved and expanded. But he also noted some serious concerns. The biggest problem, he said, was with the Northern Territory Emergency Response with its income management regime, imposition of compulsory leases, and community-wide bans on alcohol consumption and pornography. Anaya said these measures overtly discriminated against aboriginal peoples, infringed their right of self-determination and further stigmatised marked communities.

Anaya conceded that affirmative measures were necessary but said they needed to take due regard of self-determination and to be free from racial discrimination and indignity. He said there needs to be a holistic approach to address Indigenous issues nationally. He quoted Prime Minister Rudd’s apology speech and said governments needed to form partnerships with Indigenous people "based on mutual respect, mutual resolve and mutual responsibility.”

It was only with the aid of local partnerships that issues of alcoholism, domestic violence, health and education could be addressed in culturally appropriate ways adapted to local needs. He said some government programmes fail to take into account local initiatives or duplicate local services undermining Indigenous institutions. He welcomed ATSI social justice commissioner Tom Calma’s call for the government to appoint a new ATSI representative body but said that indigenous groups must strengthen their own organisational and governance capacity.

Anaya also called for constitutional change. He said there needed to be recognition of ATSI rights in a charter of rights to be included in the Constitution. He also urged continued land rights, fixing housing needs and said the Native Title Act should be amended to include UN recommendations on racial discrimination. He said the United Nations Declaration on the Rights of Indigenous Peoples should frame legislation, policies, and actions that affect ATSI people. The declaration, he said, “expresses the global consensus on the rights of indigenous peoples and corresponding state obligations on the basis of universal human rights.”

But despite the reasonableness of Anaya’s suggestions, it was met mostly with hostility this weekend from media and politicians alike. The Weekend Australian’s editorial claimed he missed the point and went on to indulge in a bit of silly UN-bashing. Former Liberal indigenous affairs minister Mal Brough said Anaya was “pontificating about human rights” while former health minister Tony Abbott bizarrely called him an “armchair critic”.

The stupidity of the response was matched on the Labor side of politics. Indigenous affairs minister Jenny Macklin used the feeble excuse of protecting children to reject the main findings of the report (despite the fact that Anaya specifically justified affirmative measures in this area). Former national president Warren Mundine said the report should be binned and claimed that although racism exists in Australia, “we are actually in Australia working towards resolving those issues."

It is difficult to see how exactly those issues can be resolved when “we” cannot even treat the considered opinion of an unbiased outsider with respect. It also shows yet again an Australian inability to deal constructively with criticism. Both Labor and the Liberal have thrown out Anaya’s baby in a childish tantrum because they didn’t like the look of his bathwater. Greens’ Indigenous affairs spokesperson Rachel Siewart is one of the few to come out of the affair with any credit. She said she was not surprised by his findings. "It is good to see an independent outside voice that brings a wealth of international experience of Indigenous development airing such strong criticisms of where this ill-thought-out top-down intervention has gone wrong,” she said. “This may ultimately result in the Government listening."

We can only hope, Rachel.
Posted by Derek Barry at 9:04 pm

u got balls posting our flag like that... what ya trying to say i take it ya dont know that the colur means....