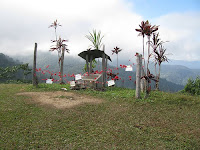 Parliament was hushed today as Malcolm Turnbull asked PM Kevin Rudd today about the fate of nine Australians among 13 people to die in a plane crash in PNG. While my deepest sympathies go out to the bereaved families concerned, I have to ask why this Dorothy Dixer question was addressed to, and answered by, the Prime Minister of Australia? I appreciate that the proximity of so many deaths to the Kokoda Trail where Australians troops repelled Japan in 1942 gave the crash a hallowed feel. I am also sympathetic to Malcolm Turnbull’s genuine grief around his own father’s similar death. Yet I am not convinced the crash was the question of such national importance it was afforded today. Stephen Smith’s foreign affairs department could have handled this adequately.

If that seems harsh, consider whether Turnbull (or any other parliamentarian) would ever open Question Time calling for a nation to mourn when the next nine people die on Australian roads. He or she wouldn't have to wait long. As the average of almost five deaths a day shows, nine people will probably die in the 48 hours following tomorrow’s likely defeat of the federal government's emissions trading scheme in the Senate.

And unlike the fickle fate that ended the lives of the 13 people in foggy mountains short of a PNG runway, a discussion of the meaning of Australian road statistics is absolutely relevant to what Turnbull and Rudd were supposed to be discussing today. Car driving habits are one of the main reasons Australia’s carbon emissions are 4.5 times the global average, just behind the US. And car deaths are the result of car habits.

This is the selfishness at the heart of our behaviour that our government and opposition seem incapable of addressing. And so while Liberals and Labor alike are noble and bi-partisan in the grief of an overseas accident, neither seem interested in forging an agreement over a coherent and comprehensive response to climate change ahead of the December Copenhagen conference.

There is no point in waiting for that conference to act. As Rudd was (probably deliberately) overheard telling the Danish PM a few weeks ago, Copenhagen won’t change anything. It is likely the Chinese and Indians won’t agree to 50 percent targets by 2050 and can point to the selfish behaviour of western countries like Australia in defence of their own actions. The best Australia can do is take a carbon reduction policy to the table. Such a policy may not be perfect and will likely need fine tuning over the years to come. But it will be a start and it will get companies thinking seriously about the externalities of their actions.

That campaign eventually needs to focus on people as well as companies. There is overwhelming endorsement for action - roughly three out of every four Australians want their politicians to take more action about it. But these people need to be shown they can do something about it too.

According to the ABS, over 80 percent of all Australians journeys are made by car. Australian roads are so crowded it is a miracle that only five people die in accidents every day. It is this culture that Turnbull and Rudd need to change if Australia is to ever get serious about climate change action. In 2005, the transport sector accounted for about 14 per cent of Australia's net greenhouse gas emissions. This means more than just agreeing on a pollution permits scheme (and god knows that is difficult enough) but a concerted campaign to change the way Australians live their stratified lives.

A ban on car ads on television would be a good starting point. Every corporately-funded TV station (including SBS) shows at least one carmaker ad every commercial break seductively selling its wares and these are supplemented by ads for oil companies, tyre makers, and various car accessories. While all these activities are correctly legal (as is smoking) they should be banned from mass media ads as they promote a lifestyle that is increasing bad for people, and bad for the planet. It is also an increasingly arrogant practice. New AAMI research has found that 83 per cent of drivers believe yelling, swearing and gesturing rudely are justifiable responses to traffic indiscretions by other road users. Most drivers blame congestion for blowing their top. The human toll is growing - it is time driving was reined in. How many deaths will it take for Turnbull and Rudd to be bi-partisan about tackling this problem?
Posted by Derek Barry at 2:30 am