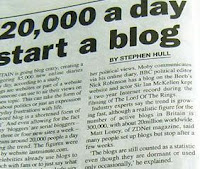 What happens to a blog when it turns seven? Well, if it belongs to Lawrence Lessig it is retired. To be fair to the legal scholar Lessig, he doesn’t actually use the r-word. Instead he called it hibernation and a sabbatical but he did write it was “the last post in this frame”. Whatever he calls it, Lessig’s departure is the latest in a line of events that is giving the impression that blogging is passé.

Lessig named three reasons why he was cutting back. These were the impending birth of his third child, a new five-year directorship at Edmond J. Safra Center for Ethics at Harvard and the workload involved in maintaining a blog. He needed two friends’ admin help to cull the 10,000 spam comments that were causing pollution among the 20,000 genuine ones. Lessig said he was not abandoning web2.0. He was continuing presence at Twitter, Blip.tv and podcasting.

Here in Australia, Kate Carruthers picked up the theme today that newer social networks have made blogs look so 2004. While Carruthers accepted there was still a need for longer-form communication platforms, she suggested there may be a move away from the likes of Blogger and Wordpress. Carruthers said possible replacements include Tumblr and Posterous which are half-way houses between blogs and shorter messages. “They seem to sit between a short message sharing medium and a traditional blog,” she said. “They also easily incorporate multimedia content.”

Carruthers didn’t mention Lessig but did link to an article Paul Bautin wrote in Wired a year ago. Boutin’s friendly advice to anyone wanting to start a blog was “don’t”. He went further and suggested all current bloggers should also down tools. “Writing a weblog today isn't the bright idea it was four years ago,” he argued. “The blogosphere, once a freshwater oasis of folksy self-expression and clever thought, has been flooded by a tsunami of paid bilge.” He says blogging lacks the intimacy it used to have. And as well as dealing with spammers and trolls, Boutin says big media have taken over. The buzz was now at social multimedia sites like YouTube, Flickr, and Facebook which “made publishing pics and video as easy as typing text”. His message condensed to 140 characters was: "@WiredReader: Kill yr blog. 2004 over. Google won't find you. Too much cruft from HuffPo, NYT. Commenters are tards. C u on Facebook?"

Boutin himself linked to another high profile blogger who had called it quits. Weblogs network owner Jason Calacanis also announced his retirement from blogging in 2008 despite professing to love the craft. Calacanis said blogging had gotten too big, too impersonal and too lacking in intimacy. But unlike Boudin, Calacanis was heading towards a more primitive form: a 600-750 member mail-list he was going to have a conversation with “I’m looking for something more acoustic, something more authentic and something more private,” he said.

Calacanis, like Lessig and Boudin, has good reasons to stop blogging. But are they indicative of a wider trend? It may be 12 months old, but Technorati’s State of the Blogosphere 2008 would beg to differ. Its data suggests that blogs are pervasive and part of our lives. 184 million people worldwide have started one and 346 million people read them. There are almost a million new posts every day written in 80 languages. Blogs are part of the daily traffic of 77 percent of active Internet users. Twice as many people go to a blog as those who visit Facebook. This seems like a practice in rude health, but Technorati does acknowledge one issue: the lines are continuing to blur as to what is a blog and what is not. It rightly says mainstream media sites packaging their content as “blogs”. But Technorati ignores the blurring at the micro-end of the spectrum at the Facebooks, Twitters and Tumblrs of the world. It defines the blogosphere as “the ecosystem of interconnected communities of bloggers and readers at the convergence of journalism and conversation.”

The blogosphere is a massive ecosystem with enormous diversity and engagement. Blogging evolved from early listings of websites people liked to personal journals and a community of interest that encouraged conversation. But it was also something else. Peter Merholz coined the term in 1999 when he decided to pronounce “weblog” as “we-blog”. Or blog for shot. Merholz enjoyed the word’s crudeness and dissonance. “I like that it’s roughly onomatopoeic”, he recalled. “These sites – mine included – tend to be a kind of information upchucking”.

Even granting that information is not necessarily knowledge, the need to upchuck it has not dissipated. In his response to Technorati’s 2008 report, Chris Pirillo got it right. “The idea of blogging will never disappear,” he said “But the process by content is created, will continue to undergo radical upheavals.”

The death of the blog is exaggerated.
Posted by Derek Barry at 12:35 am