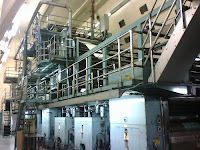 The world’s oldest Sunday newspaper, the London-based Observer, is on the verge of closure as its Guardian Media Group (GMG) owners look to save costs. The Scott Trust foundation which owns the GMG is drawing up plans to turn the 218-year-old title into a mid-week news magazine. Foundation members opposed drafts of the proposal last month and executives have gone back to the drawing board to determine the best way forward. There is a possibility the paper may survive as a heavily down version.

The decision was forced on the GMG after it announced an annual loss of $180m last week with its flagship newspapers The Guardian and The Observer losing $74m. The group immediately began work on a three year strategic plan to come up with radical measures to staunch the losses. But while the charter of the Scott Trust (“to secure the financial and editorial independence of the Guardian in perpetuity”) means that The Guardian will be protected despite the losses, there is no similar protection for the Sunday broadsheet the Trust bought in 1993. GMG’s chief executive Carolyn McCall said that while the paper could withstand the losses this year (and last year) it could not do so three years running.

Donald Trelford, the paper’s editor between 1975 and 1993, told the BBC’s Newsnight last night that the problem is caused by a combination of factors. He blamed the overly large Saturday newspapers which take all weekend and beyond to read, competition from free content on the Internet, and the Scott Trust protection of The Guardian from the open market. Trelford said that without The Observer “we’d be left with the Sunday Times [...] and the Sunday Torygraph [sic] and I can’t believe that would be a healthy thing for British democracy”.

Mark Hanson of The Independent (which has a similarly troubled Sunday edition) is paying the price for bad strategic decisions taken by Guardian editor-in-chief Alan Rusbridger. In May Rusbridger announced that a single merged team would operate across the three platforms (the two newspapers and the website www.guardian.co.uk) that would keep the “distinct voice” of each platform separate. Hanson claims that Rusbridger sunk $120m into bespoke printing presses that no other newspaper is able to share because of the papers’ unique Berliner format.

This is not the first time The Observer’s future has been threatened. GMG tried to shut the paper down five years ago. They commissioned consultants who suggested the Trust look at replacing the newspaper with a magazine. But the proposal was fought off by members of the trust and the then-editor of the paper, Roger Alton. Despite the decline of the British newspaper industry since 2004, the paper still has a healthy readership. The paper has a circulation of 420,000 (17 percent of the Sunday market) and a readership of 1.37 million.

If it does disappear it will be a sad moment in British history. W. S. Bourne founded the paper on 4 December 1791 with a commitment to the free communication of truth. Initially subsidised by the government in return for favourable reviews, it gradually found its own voice. Under David Astor in the 1940s it became a liberal, trust-owned publication, with no political affiliations. The paper became a pawn in Tiny Rowlands’ war with Mohammed Al Fayed in the 1980s before finally being taken over by the GMG after a House of Commons motion opposed its closure. It is difficult to believe that today’s parliament will feel a similar sense of outrage.
Posted by Derek Barry at 11:39 pm