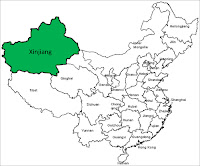 Hundreds of Uighurs rallied in Kazakhstan yesterday to call for the independence of Xinjiang from China and to mourn the 200 people killed in clashes in Urumchi with authorities last month. Most Uighurs in Xinjiang don't go as far as the Kazakh protesters and simply want be recognised within the federation. China says that the Han were mainly the victims of the most recent clashes but their claims simply cannot be trusted in this matter. Their clumsy attempts to shut down Rebiya Kadeer’s visit to Australia are the latest in a long history of subjugating the Uighur population in China’s westernmost province by whatever means possible including the media.

The large, sparsely populated land the Uighurs call home has always been at the crossroads of Chinese and Muslim culture. Han Chinese influence pre-dates Islam by a thousand years. Chinese leaders they have ruled the province on and off since then. But the startling rise of Islam beginning in 934AD complicated political allegiances for the next millenium. In 1877, the Chinese empire asserted its control of what it called Sinkiang (Xinjiang) Province. When after the Manchus were overthrown in 1911, China settled in to a long period of fractured rule. Xinjiang was ruled by a succession of mostly Chinese warlords who were hated by the local Uighur population. The province was ravaged by typhus and then ethnic wars in the 1930s until it was brought to an end by the Russians. The Red Army invaded in 1934 and Stalin saw Xinjiang as a counterbalance to the Japanese invasion of Manchuria. The USSR exploited Xinjiang for its oil and the province would remain under Soviet control until 1942.

With Russia engaged with the Nazis on three fronts, local Muslim leaders took the opportunity to take control. They renamed the territory the Eastern Turkestan Republic. The new ETR fought against Chiang Kai-Shek’s Kuomintang with Russian support. In the summer of 1949 most of the new republic’s leaders were killed in a plane crash and a third enemy took most advantage. Communist Party forces overran the province from the east in what Chinese history books now call a “liberation”. While there still great hostility between local Han Chinese and Uighurs, the Communist regime was generally accepted, partially because they were the first rulers to bring peace to the area in 40 years.

Mao’s philosophy was to integrate the Uighurs into the Chinese political system. But they were never trusted by local administrators and Xinjiang maintained the impression of a colony. There were forced labour camps, forced re-settlement, an influx of poor Han Chinese, and discrimination against Muslim practices. Mao’s portrait was hung in every mosque, Shari’a law was abolished and the teachings of imams were converted into pro-Communist lectures. In 1958, China insisted Xinjiang drop its use of the Cyrillic alphabet and use a Roman one with a few Chinese words. The effect was to weaken Uighur identity, especially across generations brought up with different alphabets.

Nothing much changed until the Deng-inspired reforms of the early 1980s. China officially acknowledged Uighurs were Turkic in origin, they allow mosques to be re-opened and they permitted some Muslim literature. This brief flower of openness ended with the Tiananmen massacre in 1989. Xinjiang had its own violent riots at the time with Muslims protesting about their lack of religious rights. A frightened China cracked down hard on the province, banned many Muslim practices (including attending mosques and observing Ramadan). They also introduced the one child policy which Muslims were previously exempt from and enforced it with compulsory sterilisations and late-term abortions.

Dissent was not tolerated. In 1990 authorities opened fire with helicopter gunships and mortars on a major protest at Baren. At least 50 people were killed. The Chinese justified the killing on the grounds the protesters were calling for jihad and the expulsion of the Han. After Baren, China stepped up its military presence in the province and placed cameras in all mosques. Relations worsened and another serious riot erupted in 1997 at Gulja caused by the tinder of the police arrest of two religious students. Despite a crackdown in which several people died, rioting continued for days afterwards and the city was sealed off for two weeks.

Uighur separatists gathered renewed vigour from Gulja. They responded with the anger of the poor man's air force - crude attacks against soft targets including one bomb in Beijing. In 2000, 60 people were killed in a massive explosion in the provincial capital Urumchi. The Chinese media reported it as an accident but it was more likely a truck bomb. After 9/11 gave this behaviour a bad name, China was able to use the western trope of a “war on terrorism” to justify further crackdowns on Xinjiang. China is worried by what it sees as unreasonable Islamic fanaticism, and particularly fears Hizb Ut-Tahrir, a growing pan-Central Asia movement which wants to establish a single caliphate from Xinjiang to the Caucasus. But most Muslims in Xinjiang have less grandiose ambitions. They want a decent life. While the Communist regime insisted on training, education and efficiency, they ignored the real issues of migration, unemployment, corruption, and lack of democracy that were alienating the Muslim population.

The Uighurs’ ultimate fear is extermination. In 1949, Xinjiang had 5 million Uighurs and 300,000 Han. Fifty years later it was 19 million to 12. And with increasing internal immigration and aggressive policing of the “one child policy” Uighurs fear they are moving ever closer to demographic suicide. Chinese policy experts don't help with patronising attitudes. They continue to refer to the autonomous regions as “backward ethnic-minority areas” and say the Han would help them “accelerate development and achieve common prosperity". But prosperity remains uncommon in Xinjiang and what economic benefits that have occurred have accrued to the immigrants. It is hardly surprising then that Uighur resistance to what they see as an occupation is growing.
Posted by Derek Barry at 11:30 pm

Great post, Derek. It is difficult to give a historical snapshot of a people who are as complex and unique as the Uyghurs.

The only bit that I would argue is that the major fear is not extermination, but assimilation. With Xinjiang schools now forcing the Chinese language, and the ban on youth in mosques, along with many other things, it would seem that the Uyghurs aren't going to disappear, they are just going to slowly blend in.

Yeah fair point Erland - though some might argue assimilation is extermination.

Assimilation is a degree better than extermination. In the first instance you conform and get to live to see your grandchildren, in the second instance you get drone bombs and tanks obliterating you and your progeny.