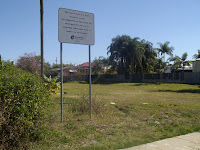 The Queensland State government is prepared to accept that local inconvenience is necessary to accommodate unexpected changes to the $5 billion Brisbane Airport Link tunnel project.

That is the message from the Minister for Infrastructure and Planning, Stirling Hinchliffe who says he will not intervene in the Coordinator General’s forthcoming decision on a 42m deep temporary shaft in the Wooloowin area despite a high profile community protest against the proposal.

“The Coordinator General will make a decision on the proposal based on its merits - as Minister I have no role in the decision making process,” Hinchliffe told Woolly Days.

The 5.7km tunnel linking Herston with their airport hit an unexpected snag in June when difficult ground conditions in the Kedron area caused builder BrisConnections to alter their excavation plan.

To avoid a significant delay on the 2012 project end date, BrisConnections asked the Coordinator General to approve a new work site on vacant government land at the corner of Rose and Kent Sts Wooloowin to build a shaft and access passage. This is needed to ensure the preparations for the digging of the tunnel remain on time for the arrival of the massive tunnel boring machines which are currently digging westward from Clayfield.

According to Brisconnections’s change request, all other options would delay the project by eight months which would affect thousands of people living near major worksites stretching from Toombul to Kedron and Lutwyche who would have to put up with a longer period of disruption.

BrisConnections say the Wooloowin site will be operational for 29 months before being fully remediated.

But Kalinga Wooloowin Residents Group spokesperson Brian Nally says the real reason for the worksite is to ensure that BrisConnections CEO Dr Ray Wilson does not miss out on his salary bonus for completing the project on time.

According to documents on BrisConnections own site, he will pocket almost a million dollars on top of his base annual salary of $650,000.

Hinchliffe said the remuneration arrangements of BrisConnections’ CEO has no relevance and that the Coordinator-General will make an independent and rigorous assessment of the proposal.

About 150 local residents and business owners have made submissions to the Coordinator General as part of his call for public comment.

Nally says the unexpected proposal is adding to the misery of local residents who have had to put up with noise, disruption and adverse impact to property values due to the Airport Link and nearby Northern Busway projects.

“Locals are sick and tired of being subjected to lots of inconveniences,” Nally said.

“This is not about NIMBY [Not In My BackYard] but there have been issues with parking in the area and access to the local [high] school.

“This is the last straw,” he said.

However, Kedron High School principal Myron McCormick said the school has a good relationship with the contractors and supports the change as long as it addresses parking and safety issues around the school precinct.

“While I can sympathise with local residents affected by the change, sometimes you have to look beyond to see what is best for South East Queensland going forward,” he said.
Posted by Derek Barry at 11:53 pm

I have PR 2 blog and it's 3 years old. I'm interested to 3 way link exchange if you are ready to give me link on your blog then I'll also add your link on my blog here is my blog http://onlineunsecuredbusinessloan.blogspot.com/
you can send me your details or other query on this jennifer.maben@yahoo.com