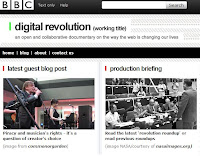 World wide web founder Tim Berners-Lee has told an exciting and ambitious new BBC “open source” documentary series that governments and companies should limit the amount they snoop on web users. Berners-Lee admitted the web should be policed for unacceptable use but said censorship would have "all kinds of pernicious effects". He said the medium should not be set up with constraints and praised the Internet’s ability to route around censorship. “But it is by no means an easy road,” he warned.

Berners-Lee was speaking in a recent launch for a four one-hour series due to air next year that has a working title of Digital Revolution. According to the BBC, Digital Revolution is an “open source documentary". It is due for transmission on BBC Two in 2010 and will take stock of 20 years of change brought about by the World Wide Web. The makers say it would have been foolish to make a documentary about the web without engaging the web itself.So they are requesting the participation of the public in every aspect of the production process and will be blogging their progress.

Although it is likely that everything about Digital Revolution (including the name) will be subject to crowdsourcing change in the months to come, it is safe to say Berners-Lee’s words will remain. Tim Berners-Lee is one of the true greats of the digital revolution. When Intel held a poll in early 2008 to find out who was the most influential person in technology in the last 150 years, it was Tim Berners-Lee who came up trumps beating Google’s Larry Page and Sergey Brin into joint second place.

It is no surprise that the last two decades dominated. The pace of technology has increased several times over in that time due in no small part to Berners-Lee, Page and Brin. But while the stunning invention of the world wide web gave people a revolutionary intuitive interface with which to tame the increasing powerful Internet, Berners-Lee was following in the great British problem-solving tradition of Babbage and Turing.

While working at the CERN particle physics lab in Geneva in the 1980s, Berners-Lee was frustrated by fact his company’s computers couldn’t easily talk to each other. What he went looking for was an easy way for scientists to share data over the Internet. Drawing from the work of Vannevar Bush on hypertext, Bill Atkinson’s Hypercard for Apple and the vision of Robert Fano’s “Proceedings of the IEEE”, he had created by 1990 the technology that became the web. These were a set of protocols for displaying documents linked across the Internet.

Berners-Lee was immediately aware of the potential power of his inventions. But when he told CERN, management were unimpressed. His supervisor called it “vague but exciting”. No one could see the potential of hypertext. Berners-Lee began to fear that a rival protocol might win out. The University of Minnesota’s Gopher was clunky but gaining in popularity. It may have edged out the web but made one crucial mistake. When the University of Minnesota suggested it might charge to use Gopher, Berners-Lee saw it as an act of treason. He persuaded CERN to release the rights of the web for free into the public domain. Anyone could take the protocols and build anything they wanted on top of them. Berners-Lee’s brilliance was to design the web without a centralised place to register a new server or get approval of its contents.

(photo by hyoga) Berners-Lee has many other claims to fame. He wrote software to dish out instructions from computers to clients that would eventually become known as “browsers”. He was also central to the development of the remarkable Hypertext Markup Language (html) whose simple instructions, graphic interface and linking capacity made publishing web pages easier, more powerful and more attractive. In 1992 he became one of the early pioneers of surfing (and a grandfather of blogging) when he began postings items and lists about new websites that attracted his attention and gave reasons why they interested him.

But as Dan Gillmor reminds us, there was something else important he purposely did not do. He didn’t patent his invention. Instead he gave the world an open and scalable platform to build in further innovation. Berners-Lee was keen to promote a sense of shared ownership. “Use links, don’t talk about them”, he wrote. Later he noted in his book Weaving the Web that inventing the web involved a growing realisation that there was power in arranging ideas in an unconstrained web-like way.

He knew that central points of control would rapidly become a bottleneck which could choke the web. It was critical the web remain "out-of-control". Berners-Lee’s philosophy was based on the creative anarchy and universality of the Internet as a whole. As long as everyone accepted the rules of sending packets around, packets could be sent anywhere. And so from 1993 onwards, the network of networks exploded.

But perhaps it is only now that Berners-Lee’s vision is being truly being realised. He wanted a read-write web but what developed out of the crowd of the 1990s was read only. The rise of social networking, blogs, wikis, and videos is finally changing the Internet into a many-to-many (and few-to-few) communication tool. But Berners-Lee still wants more. He says the web should be as free and unconstrained as paper. When you buy paper, he said "it does not come with the fundamental constraint on it that you can only write truth.” His conclusion: the internet should not be controlled, censored or intercepted by government or companies. His statements will not be welcomed by governments and companies but it is clear that Berners-Lee’s own digital revolution still has a long way to go.
Posted by Derek Barry at 11:53 pm

Who decides what use of the web is "unacceptable"?