Mark Bahnisch on books in the digital age 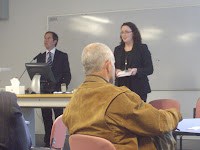 I went along to QUT Kelvin Grove this evening to listen to sociologist, academic and writer Mark Bahnisch give a talk on “Books in the Digital Age: The Future of Writing”. The lecture is part of QWC’s Wordpool series of three lectures for 2009 about the future of books, writing and journalism.

Bahnisch said his approach to the lecture would be sociological. He began with a quote from French philosopher Jacques Derrida from his work Of Grammatology which said that the death of the book announced the death of speech and a mutation in the history of writing which will happen over centuries. Bahnisch said it was on that scale we must reckon it here as the full effects of what is happening today may not be known for centuries.

Bahnisch used the example of the telephone in 19th century London where it was initially used to transmit musical concerts and church services into crowded drawing rooms. Despite these creative uses, no one considered using them for one-on-one conversational communication because the total number of telephones was so low. Its use as a one-to-one tool needed to wait for critical mass.

With that in mind, he turned to the issues related to books and printing at the start of the 21st century. Bahnisch said we all do a lot more writing than ever before, even if most of it is not intended for publication (eg texts, emails, notes etc.) though perhaps the meaning of publication has changed. He said this represented a return to a previous state. Books are a technology, he said, even if they do not have any whirring parts. The explosion of printed books occurred not only because of Gutenberg’s invention but also because of improvements in punctuation, and spaces between words. It was a process of democratisation that made books useful and saw them expand beyond their original remit of bibles, religious tracts and illuminated manuscripts. The sacrality of texts (the notion that there is something special about them) was being challenged.

Bahnisch quoted Bruno Latour’s We Have Never Been Modern which said that what we think of the characteristics of modernity are almost always an incomplete process. Bahnisch challenged the theory of the relationship between books and writing as a linear exposition. He said that was not how people read or retrieve information. He noted how Vannevar Bush’s World War II “memex” machine was the prototype for hypertext – an invention that predated the technology of the Internet. Bush’s insight was to realise that people retrieve information in non-linear ways.

Bahnisch then moved on to a discussion of digital culture. He dismissed the idea that there was such a thing as digital natives. Most 17 and 18 year olds don’t blog or use Twitter, he said. Most enthusiastic users are older and are active readers who understand references and are trained in the culture of attribution. And for a range of reasons there is also a lot more writing going on today than ever before.

The barriers to publication have come down and the boundaries between authorised professionals and everyone else has been blurred. This “dedifferentiation” may mean that the era of the professional writer has ended. The digital utopians and cyber-libertarians may have wanted “information to be free” but there is no longer one digital public sphere out there. Instead there are many communities and multiple publics to deal with. A lot of material is written for partial audiences and there are parallels here with Murdoch's plans to enforce payment for content. Writing will continue in large quantities. But the consequence, says Bahnisch, is that it will be “much less remunerative” in the digital environment.
Posted by Derek Barry at 12:16 am

Good Morning from your proof-readers
(another dying art)

"he turned to the issues related to books and printing at the start of the 21st century. Bahnisch we all do a lot "

Mark is a sweetheart, and was a pal to me when I first started blogging in Feb 05; although Laugh At Us Rodeo has changed a LOT since then.

Just another quick correction - I said that most 17 or 18 year olds didn't use Twitter or blog (not didn't use Facebook).

sorry Mark, will fix that too