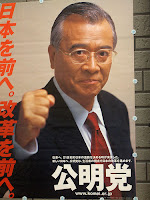 As expected, the opposition Democratic Party of Japan (DPJ) have won a landslide victory in elections ending half a century of almost unbroken rule by the Liberal Democratic Party (LDP). The DPJ is likely to end up with 308 of the 480 seats in parliament almost tripling their representation from the last election in 2005. Incoming Prime Minister Yukio Hatoyama’s work will be cut out as he has made many election promises that don’t sit well with Japan’s troubled economy. The 62-year-old US-trained engineer called the victory “the starting line” but won’t announce his cabinet until he is officially elected prime minister by a special session of parliament, expected to be in about two weeks.

The outgoing Aso government crashed to defeat despite asking many legitimate questions about the DPJ’s ability to pay for its expensive campaign promises. These included a $300 a month child allowance to push up the birth rate (ageing is a principal cause of Japan’s stagnation), income support to farmers and heavily subsidised schooling. But the LDP’s own record was in tatters after the collapse of Japan’s bubble economy and they have stumbled with a succession of mediocre Prime Ministers since the charismatic Junichiro Koizumi (who won the last election) resigned in 2006.

The Nikkei-225 share index reacted well to the DPJ victory going up two per cent to an 11-month high earlier today. But there is a lot of catching up to do. Its stock market contracted by a massive 45 percent between July 2007 and February 2009. Japan was devastated by the GFC and the economy contracted by 0.7 percent in 2008 and is predicted to contract by another 2.5 percent this year before reaching a modest expansion of 0.6 per cent in 2010. Over the medium term, economic growth in Japan is expected to recover to about 1.8 per cent a year. However, exports, the main driver of the country’s economic growth, have been declining rapidly, turning the country’s trade surplus into a deficit earlier this year.

Japan has the largest fiscal deficit (as a share of gross domestic product) among the OECD economies, with public sector debt forecast to reach around 174 per cent of gross domestic product by the end of 2009. This wasn’t helped by the Aso Government’s introduction of a 10 trillion yen (US$111 billion) fiscal stimulus package in December 2008. Any further fiscal stimulus package will only worsen that situation. But after a long period of minimal growth and then severe recession there is now a strong political incentive to pursue economic growth polices. What remains to be seen is whether the DPJ can deliver. The signs are not promising. In the election campaign, Hatoyama proclaimed what The Economist called a “mushy-sounding concept, yuai, that mixes up the Chinese characters for friendship and love”. He calls it fraternity and says tariff sectors such as agriculture will be even more protected than they already are.

Another major challenge will be the environment. Japan’s Kyoto target is 7 percent reduction by 2012 on the 2000 figure. But even with recession, they are tracking at an 8 percent increase. Japan has also been criticised for its 2020 targets which is a modest 15 percent reduction using 2005 as the base year (not 1990 as Europe is using). In June the then environment minister Tetsuo Saito outlined the LDP goals for Copenhagen. Saito claimed it was following the lead of the US by starting the clock from 2005 and said the country has invested $10b in the “Cool Earth Partnership” with developing nations aimed at reducing emissions by 50 percent by 2050.

A key part of the DMJ’s election manifesto was green reforms that went much further than the LDP’s targets. They promised to lift Japan’s 2020 target to reduce greenhouse emissions to 25 per cent below 1990 levels. Hatoyama has also promised to create a mandatory domestic emissions trading scheme, again something the LDP were opposed to. While green groups are obviously pleased with these outcomes, others have issued a warning. Jake Schmidt, international climate policy director at the US Natural Resources Defence Council, said the DMJ would have to deal with deep-rooted opposition in the bureaucracy and business sector. "You won't see a wholesale switch,” he said. “They will still have to deal with concerns of industries and with [strong] ministries that have very different views on climate change”. Hatoyama will need every seat of his huge mandate to overcome such bureaucratic inertia.
Posted by Derek Barry at 11:25 pm