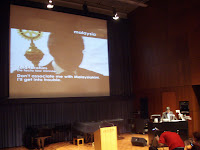 When Barack Obama’s campaign team and the New York Times online editor were scouring Asia-Pacific for innovative ways to harness the power of new media, they avoided Australia. There was little going on here they did not already know. Where they did go to was Kuala Lumpur, Malaysia, which is home to some of the most cutting-edge use of media in the world. The person both organisations sought out was journalist and editor Steven Gan. Gan is the editor of Malaysiakini (MK) an online citizen news service that has become the most trusted media organisation in the peninsula. MK publishes in Malay, Chinese, English and Tamil and has also expanded into video.

Today, Brisbane was fortunate enough to host Gan and several other key Malaysian new media players at an all-day symposium called “New Media and the Informed Citizen” at the Queensland Conservatorium of Music in Brisbane’s South Bank. The conference outlined the vibrancy of the industry in Malaysia in front of audience of about thirty people and it was a shame more people in Brisbane didn’t get the chance to listen to how the media is being shaped in new directions in our part of the world.

“Malaysiakini” means Malaysia Now and celebrates its tenth anniversary in November. Up to around 1998 the Malaysian Barisan National (BN) government (which has ruled since independence in 1957) had a monopoly on news in cyberspace. But after visiting Silicon Valley, Prime Minister Mahathir Mohamad introduced the Multimedia Super Corridor (now MSC Malaysia) to kickstart the local IT industry. One of things Bill Gates and others told Mahathir was that he should not censor the Internet. While Mahathir had misgivings (particularly over pornography) he saw the business benefit and agreed. Malaysiakini rose to exploit the loophole, starting up with just four journalists.

But despite the liberal censorship rules (by Malaysian standards) the new publication still attracted the unwelcome attention of authorities. In January 2003, police raided the offices of MK looking for details of an anonymous letter writer who satirically compared a politician to the Ku Klux Klan. The politician was not amused and sent police in to find out the identity of the letter writer. Gan, as any good journalist would do, refused to divulge his source. Police seized four servers and 15 central processing units from its office and interrogated Gan and senior staff. The move provoked an outcry with spontaneous protests outside the office and led to a coalition of groups condemning the raid. Police never formally raised charges and returned the now obsolete boxes two years later.

MK continued to grow as its attacks on government corruption attracted a new readership unhappy with the servile nature of Malaysia’s mainstream press. In 2006 they broke the Petronas story over lies the oil company boss told about its activities in Sabah. The following year they took on Abdul Taib Mahmud the long-term corrupt leader of Sarawak over logging kickbacks to Japanese shipping firms. And last year MK played a pivotal rule in the general election (where the MSM all supported the government) and BN had its worst result in 50 years, losing control of five states.

MK now employs 30 journalists and has moved into video at www. malaysiakini.tv. They have also trained up a team of citizen journalists and provided them with video cameras to report on local news across East and West Malaysia. MK grew steadily with a subscription only model ("go subscription" was the advice he gave the NYT) and a large bed of content. 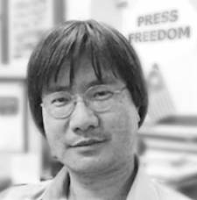 As the election got closer in 2008, Gan made an important decision. He opened up the site for free for the entire period of the election. By the time of the vote on 8 March it had overtaken The Star newspaper as Malaysia’s most popular political site. Gan called the election a tsunami that almost completely overturned Malaysia’s political system (a later speaker said it wasn’t a new chapter in Malaysian politics – it was a new book).

Thanks to a corrupt government and the biased MSM, Malaysiakini has now established itself as the most trusted media brand. It brought in thousands of new subscribers after the election. The badly shaken BN government admitted they lost the Internet war and have now started to negotiate with MK and the other online outlets.

MK is now a thriving media organisation that has made a profit in each of the last four years. Gan says they were lucky they started their subscription model early. And after the election he says that big advertisers have started to take notice. He described one of his proudest moments as a video they released of a “nude ear-squat” form of prisoner punishment the government claimed had not been used in decades. The video scandal caused a Royal Commission to be set up to investigate the affair. “A half minute video changed practices that were going on for years," he said.
Posted by Derek Barry at 11:19 pm