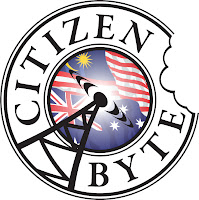 “Everyone, from journalists to the people we cover to our sources and the former audience, must change their ways. The alternative is just more of the same” – Dan Gillmor (We the Media).

And speaking of changing ways, I must begin with a correction. I gave the impression that Brisbane media did not attend the Citizen Byte new media symposium in Brisbane yesterday. That simply wasn't true. Graham Young (OnLine Opinion, Ambit Gambit, What the People Want) was an invited speaker and there was also Wotnews.com.au and Woolly Days. I have since found out that other journalists and academics would have attended with more notice. In any case, the proceedings were filmed and I hope will be available in the public domain soon enough.

Citizen Byte is a community research project whose stated purpose is to “examine what the implications of the new media environment are on politics and the political sphere both in Australia and in Malaysia.” One of those implications was that new media was having a bigger impact in Malaysia than it was in Australia. Last night I discussed the role of keynote speaker Steven Gan. The editor of Malaysiakini is the “new media” go-to person for the White House and the New York Times and he has transformed a small online venture into Malaysia’s most popular news site. But tonight I want to discuss some of the other Malaysian wisdom on offer at the symposium. Tomorrow I will conclude with some great observations by the conference’s only Australian speaker, Graham Young.

Not the least wisdom came from a member of Malaysia’s media elite: Datuk Azman Ujang. Datuk Azman is chair of the Malaysian Press Institute and the Editorial Adviser at both national news agency Bernama and its broadcasting arm Bernama TV. He took up the latter two jobs having retired as overall GM of Bernama. Datuk Azman is an experienced powerful insider who can get away with calling a spade a spade in the corridors of power. He told his Brisbane audience how the government admonishes him for being “too honest” but it does not dare censure him further. Yet even he was disturbed by the last election result which he said was a wake-up call for the media as well the government. Datuk Azman said that entrenched government support within the media has resulted in biased news for 50 years. The arrival of new media suddenly made their credibility a marketplace issue for urban voters. Malaysiakini took up the challenge and inspired other news portals. Meanwhile opposition politicians took to blogging in numbers to enhance their appeal with younger audiences and crash through their lack of coverage in the MSM. They also used the world’s highest mobile penetration to good effect to spread viral political messages.

But most of the villages don’t have the Internet or mobile phones and the government won the election overall 60:40. The poorer states, particularly East Malaysia voted for BN. There is entrenched corruption in Sabah and Sarawak that has survived for half a century which KL turns a blind eye to. And the government uses regulation of the broadcast spectrum and annual licensing of newspapers to keep the media in check. Datuk Azman said there were “unwritten laws” which depended on the circumstances and mood and attitude of the government at a particular time. 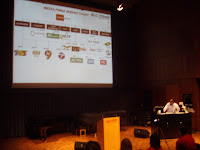 Mohd. Zulkifli was the next to speak. Zulkifli is a content manager at Media Prima Berhad. Media Prima Berhad is Malaysia’s largest media company with a diversified portfolio of assets including four free-to-air TV channels. Zulkifli is bringing the power of new media to bear on many of those assets. He said audiences had to register to his websites but the content was free. 838,000 Malaysians have signed up.

Zulkifli says their biggest differentiator is video content but they are also providing Tweetdecks, SMS alerts (with video alerts starting next month), streaming content on mobiles, as well as interacting with television shows in innovative ways that would please fan theorists like Henry Jenkins.

Their websites are full of blogs and online discussions with network stars and there are discussion rooms where audiences can go to have their say and possibly affect the plots of soap operas. There is also an “Indie showcase” channel that deliberately attempts to “push the boundaries of censorship”. In 2007 Berhad released Malaysia’s first made-for-web drama. “Kerana Karina” or KK tells the story of overnight pop star Karina in 20 four-minute episodes. Though he didn’t mention in the speech, Zulkifli took time out from his day job to write the lyrics to the KK theme song.

What he did mention was that Berhad’s investment in new media (including 60 staff) is starting to pay off. The most popular site TV3.com gets 41 million hits each month. His job is to keep the revenue high otherwise, he said, he “wouldn’t be here next year”. Zulkifli says that social media is the big challenge of the next couple of years. Somehow, I don’t expect him to fail this challenge - Mohd. Zulkifli is definitely not “more of the same”.
Posted by Derek Barry at 12:00 am