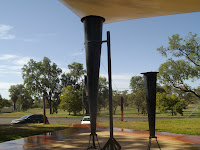 Surely the strangest tourist attraction in Charleville are the two Vortex Rainmaking Guns in Graham Andrews Park just off the road to Cunnamulla. The story of why the guns are there relates back to the bizarre actions of an extraordinary meteorologist during the worst drought in Australian history. The so-called federation drought began in 1895 and lasted seven long years. It reached its devastating climax in 1902 when virtually all of NSW and Queensland was affected. Half the newly formed commonwealth’s sheep died as did two in five of all cattle. Graziers grieved as their parched topsoil turned to dust.

In NSW, the desperate State Government declared 26 February 1902 a day of “humiliation and prayer” for rain. Up in Queensland matters were just as bad, but one man in particular wasn’t prepared to settle for humiliation or prayer. He was the state's Chief Meteorologist Clement Lindley Wragge. Wragge didn't want to ask God's permission - it was his plan to make the rain himself. Wragge was a flamboyant man but no crank. He was a world renowned meteorologist who travelled widely and was extremely innovative.

It was his idea to give names to cyclones. He took great pleasure in naming storms for anything from mythological creatures to politicians who annoyed him. It was this latter habit that, while endearing, created many powerful enemies. It would eventually see him be overlooked to lead the new national weather bureau in 1908 despite the fact the bureau was his idea and he had by far the best credentials for the job.

Back in 1902, Wragge had weightier matters on his mind. Clement had been Queensland’s chief government meteorologist for fifteen years and the impact of the drought and finding ways of fixing it were a personal obsession. During a visit to the wine making region of northern Italy, he found out about a strange invention the grape-growers used to dispel damaging hailstorms: the amazing Stiger Vortex gun.

The apparently successful idea was the brainchild of Austrian inventor Albert Stiger. In the 1880s, Stiger constructed a four metre tall cannon which shot vertically into the air prevented the formation of hailstones. No one was entirely sure how. Some attributed it to the effect of the explosion while others said it was the vortex ring that rose from the cannon. Whatever it was, it worked and the hail fell as rain much to the delight of vineyard owners. Wragge was deeply impressed and immediately thought that Australia’s drought could also be ended by similar “explosions in the air”.

Wragge took Stiger’s design back to Brisbane and created his own guns. The weapons were 18 feet long and shaped like “conical candle snuffers”. The idea was to use a battery of guns to fire shells at clouds causing a vortex (an artificial whirlwind) which would release rain. Wragge already had a working relationship with Charleville council so the outback town seemed a logical place to conduct the experiment. The drought-suffering council was happy to oblige and raised public donations to help fund the mission. Wragge took ten of the candle-snuffing guns to Charleville and placed them at various locations across town. Then it was a case of waiting for a cloudy day.

The Charleville Bugle of 12 September 1902 described the anticipation:

Self-confessed rainmaker Clement Wragge, has arrived in Charleville to oversee the delivery of six massive Stiger Vortex cannons. Mr Wragge will begin rainmaking operations when suitable clouds gather above the township. At that time Mr Wragge will give the word for the cannons to fire rain producing gas into the atmosphere. "I feel sure he is our strongest hope for rain," town Alderman John Armstrong said.

But the Bugle also expressed its doubts. In an editorial it asked “will Charleville be the laughing stock or envy of the world?” It would be another two weeks before it could be answered. On 26 September, the cloud cover was satisfactory for the experiment. Wragge gave the signal to load and the guns exploded into life. A flask of gunpowder was emptied into each breach and the powder was detonated with a piece of blasting fuse. The guns banged away one after another till the powder was used up. The effect was noisy and spectacular but there was nothing by way of rain.

Undaunted, Wragge procured more gunpowder and launched more detonations. Again the clouds obstinately refused to offer rain and he abandoned the experiment. That night he gave a lecture to a packed hall and returned home to Brisbane the following day beaten but unbowed. He later tried similar experiments in Roma and Harrisville but they also failed. Worse still, some of the guns exploded when they fired, narrowly missing onlookers.

When Herr Stiger found out about Wragge’s experiments, he sent him a letter admonishing him for his foolishness in trying to make rain this way. The guns were only designed to dispel hail, he wrote, and not to force clouds to release rain.

People soon lost interest in Wragge’s idea as news of the failure spread. In any case the drought broke at the end of 1902 and the guns were no longer required. The ten Charleville guns were abandoned and left to rot until most of them became dilapidated and sold for scrap.

Today only two guns remain intact. They have been lovingly restored and given pride of place in Charleville’s biggest park. Wragge, meanwhile, quit his job the following year when his funding was decreased by the Commonwealth. Fuelled by bitterness that his talents were not recognised, Wragge eventually moved to New Zealand where he built an observatory. He died of a heart attack in December 1922 at the age of 70. The Vortex guns are a fitting monument to a bold experimenter for whom failure was always only a temporary obstacle. As a sign at the park reads, Wragge was "equal parts genius, eccentric and larrikin".
Posted by Derek Barry at 8:59 pm