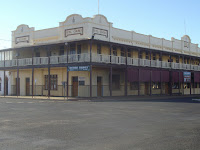 There are several grand buildings lining Charleville’s Wills Street linking the railway station with the centre of town. But the most elegant building of them all is Charleville’s most famous pub, the 80 year old Hotel Corones. The hotel was completed in 1929 after five years of construction. The man who built it was the remarkable Greek immigrant Harry Corones.

Haralambos Corones was born in the village of Frylingianika, on the island of Kythera on 17 September 1883 to Panayiotis Coroneos, a fisherman, and his wife Stamatia. After he completed his military service in 1906 the family decided that given the lack of opportunity on the island that Harry would have to emigrate. His application to go to America was rejected for medical reasons so he decided to go to Australia as his mother had relatives in Brisbane.

Harry arrived in Sydney and got a job at an oyster saloon where he worked long hours and improved his English. He wanted to start a business on his own and decided on Charleville in remote south-west Queensland. There he found an empty cafe, owned by a Greek named Theo Comino, was for sale. In 1909 Harry Corones bought the cafe with a loan of £120 and set off for Charleville which would be his home for the rest of his life.

Charleville was a remote, hot, dry and dusty but thriving cattle country town with saw mills, a meatworks and a few other small factories. It was an important rail terminal, and a stopping point for bullock trains and camel caravans, as well as for the many drovers who were moving stock. His new cafe on Alfred Street needed much work, but Harry succeeded by offering good service, good food and warm hospitality.

The following year he bought a bigger cafe and met Paddy Cryan, a travelling brewery salesman from Brisbane. Paddy astutely recognised in Harry the qualities of a good hotel owner. He suggested that Harry should move into the hotel business and take on the lease of the vacant Hotel Charleville. Cryan assured him the brewery would finance the deal and train him in the business.. On 7 October 1912 Harry signed the lease on the hotel for five years at a rent of £ 6 per week. In June that year Harry also became a naturalised Australian citizen.

In 1914 he married and was forced to rebuild the hotel after it was destroyed by fire. The new hotel was bigger and more luxurious than its predecessor. However there were still some rough outback ways to deal with. Boundary rode their horses into the bar, and at times there would be almost as many horses there as people. Harry was forced to change the doors to make them too narrow for a horse and its rider to pass through.

Harry expanded his business interests to open a cafe and Charleville’s first cinema with an innovative generator and electric lighting. The Excelsior cinema at the rear of the Hotel showcased silent movies and vaudeville acts from Sydney and Brisbane.

By now Harry was not only a successful businessman but also a respected member of the community. He served on the board of the Charleville Hospital and was a member of the original committee of the Ambulance Centre and the Fire Brigade Board. He also became interested in Australia’s fledgling aviation industry as a way of ending Charleville’s remoteness.

When Sir Hudson Fysh and others foresight decided to form an airline, which they would name Qantas (Queensland and Northern Territory Aerial Services), several of their meetings were held in the Charleville Hotel. Harry suggested they gave the Greek names Perseus, Pegasus, Atalanta, Hermes and Heppomenes to five of their first seven aircraft. When the company was launched in 1920 Corones was one of the original shareholders. Qantas’ first scheduled service was from Charleville to Cloncurry on 2 November 1922, and he sent picnic hampers out to the planes. For many years afterwards, Qantas international flights would stop in Charleville.

(Corones pictured left with commissioner WH Ryan.) With his lease on the Hotel Charleville due to expire in 1924, he began to make plans to build his own luxury hotel. He paid £50,000 to buy the ramshackle Norman Hotel, which stood a block south of the Hotel Charleville on the corner of Wills and Galatea Streets. He brought in architect William Hodgen to demolish the old building and put in its place the new Hotel Corones.

In 1929, after five years of planning and construction, the new hotel contained a lounge and writing room, a dining-room for a hundred and fifty people, a private and a public bar, a barber’s shop and a magnificent ballroom capable of seating three hundred and twenty people at a banquet. Upstairs were ornate bathrooms, 40 rooms and a private lounge. It was easily "the best equipped and most up-to-date hotel outside the metropolis".

This luxurious hotel immediately gained a widespread reputation for elegance, luxury and fine service. One of the earliest guests was the aviator Amy Johnson on her epic flight from Britain to Australia in 1930. She filled her hotel bath with twenty-four magnums of champagne which all the other guests later wanted to drink in her honour. Other early distinguished guests included Sir Charles Kingsford Smith, the Wright brothers, Nancy Bird and English singer Gracie Fields. Fields caused a sensation when, in Beatles Let it Be-style, she stood at the open windows and sang the song “Wish Me Luck As You Wave Me Goodbye” to a large crowd outside.

In World War II business boomed in Charleville with the establishment of an American Air Force Base in the new Charleville Hospital. Harry welcomed the troops and treated them with his usual exuberance and hospitality, holding dances in the hotel every night. One night a crowd in one of the rooms had become so rowdy that an American Air Force officer, driven to distraction by the noise, fired his revolver down the corridor to shut them up. It was the Americans who first began to call Harry “Poppa” and his wife Eftyhia “Nana”. From this time on they were both were known affectionately to all by these names.

Harry’s crowning glory was an MBE he received in 1965. In his later years, he lost his hearing and a large part of his eyesight. He died in March 1972 aged 88, still resident in the hotel that bore his name. A procession of townspeople accompanied his coffin to the local cemetery where he was buried. His wife died two years later. The Hotel Corones still stands as a memorial to the pair but eventually was sold by the Corones family. The building became dilapidated but was painstakingly restored after the disastrous floods of 1990 and was placed on the Heritage List in 1997. There are now daily tours through the Hotel Corones celebrating the grand vision of “the uncrowned king of the West”.
Posted by Derek Barry at 11:06 pm

What a fantasic story. What a remarkable man - a true Pioneer.