(photo by Revenge Radio) The band Midnight Oil play wonderful, pumping, roadtrip music. Though they were one of the few Aussie outfits I was aware of when growing up in the Northern Hemisphere, I never really got into them until a “best of” compilation was on high rotation when driving up the Newell Highway from Melbourne to Brisbane for Christmas in 1990. It was hardly seasonal but it was good singalong stuff and the energy in Peter Garrett’s music helped make the three day trip go a lot faster.

Given his natural charisma and the polemics of his lyrics, it was no surprise to see him eventually enter politics. What was surprising to me, was that he picked Labor ahead of the Greens. The mistake I was making about Garrett, like many people before and since, was to only look at his passion and forget about his power.

Labor was in awe of Garrett. On the eve of Australia Day 2004, then leader Mark Latham met him for lunch at Garrett's home in Mittagong in rural NSW. Latham was totally entranced by his host. “Simply outstanding, charismatic, humane, full of ideas [and] dedicated to his gorgeous family,” gushed Latham in his Diaries. “I felt like giving him my seat”. Latham wasn't quite that generous (he eventually gave that to Chris Hayes) but he did parachute Garrett into parliament for the safe inner Sydney east seat of Kingsford-Smith on the resignation of Laurie Brereton. Garrett’s candidacy attracted huge media interest. In a losing election for Labor, Garrett held Kingsford-Smith increasing the margin by two to ten percent.

Mark Latham knew that Peter Garrett would be electoral gold for Labor. The kudos he brought with his musical career and his work with the Australian Conservation Foundation were huge and he became a fundamental plank of Labor’s strategy to win back power. Whenever the Howard Government or their messengers in the media complained that Labor was the plaything of trade unionists, leaders such as Latham, Beazley and Rudd could wheel out a bona fide rock star in their midst. Garrett was a breath of fresh air. Rudd was particularly fond of this card. He was in no doubt that Garrett would play a leading role in re-positioning Labor as a party that cares about the environment.

The Liberals too immediately saw Garrett as a dangerous opponent and moved heaven and earth to destabilise him. They pointed out how he wasn’t registered to vote in Australian elections for a decade. Garrett's claim in return wasn’t entirely convincing. He said he had a silent enrolment, needed to keep his home address private for security reasons, and insisted he voted in “most elections.”

More damagaing however, was the changing-it-all-in-power “joke” with Steve Price at Melbourne airport a couple of weeks before the 2007 election. Many on the left worried that this was an appalling blunder notwithstanding Price’s shabby role in the affair. Many in the party secretly worried about the impact on its rebranding too. But it all washed over and did not undermine Rudd’s brutal blitzkrieg on the prime ministership - nor Garrett's own electoral popularity. Garrett bagged a further swing of 4.6 percent in 2007.

Kevin Rudd publicly promised Garrett the environment ministry. But with Price mistake reminding everyone he was a political greenhorn, and the environment threatening to become the second most important minister after the Treasury; Rudd carefully clipped Garrett’s wings and gave the crucial portfolios of climate change and water to the more wonkish Senator Penny Wong. Wayne Swan would be the spokesman on these affairs in the lower house.

Once again, this was played out as a defeat for Garrett by both sides of politics. The right crowed that Garrett was being punished for his stupidity while the left felt Garrett was being set up to fail by his boss. Garrett was rolled on uranium policy and would now had to carry it out. Yet as environment, heritage and the arts minister Garrett still wields considerable cultural power. And despite often overruling him, I suspect that the fellow workaholic Kevin Rudd is very happy with the brilliant and energetic job Garrett is doing in a difficult job. He challenges the rules to the greenest of his compromise abilities and hasn’t had a single appellate challenge to his decisions yet. He knows that the law must change for decisions to change. Yet very few other ministers are as accused of hypocrisy as often as he is. 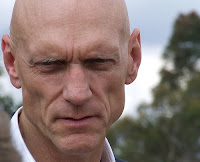 (photo by Liam) The French, on the other hand, have no doubt where he stands in the pantheon. The Oils were always extremely popular in France. Last month, French culture minister Frederic Mitterrand named Garrett Officier in the French Order of Arts and Letters. In his speech Mitterrand praised Garrett not only for work as an internationally acclaimed rock singer but also because he was “un ardent défenseur de l'environnement et à une figure éminente de l'écologie.”

Ardent defenders of this figure éminente in the local media had been few and far between but have begun to crop up in the last few days. Crikey’s Bernard Keane started the fightback on Thursday. “Leave Peter alone”, he demanded. Garrett like Kevin Rudd and Malcolm Turnbull, Keane reminded us, doesn’t have to be in politics, or work at all. All could retire now and count their money. “[But a]ll are in politics because they want to achieve genuine change,” he said.

That theme was picked up further in yesterday’s Sydney Morning Herald. Paul Daley says Garrett is “singularly miscast as the naive blunderer in the big, bad world of public policy”. Garrett joined the Labor Party because he knew that is where he could achieve the most amount of change. Despite the apparent “slaps in the face” he has received, Garrett “does not greet the sunrise with existential angst.” On the contrary, Daley says Garrett has a longer term view and sees well past the midnight hour.

On the same day over at Murdoch opinion HQ, Peter van Onselen also waded in for Garrett. He says the former singer has become an accomplished pragmatist who doesn’t become captured by lobby groups, despite having with a strong environment conscience. Van Onselen had a caveat for his fellow Peter. “What you have to hope, however,” he said. “is that Garrett has a line in the sand that he won't cross, a policy decision he would refuse to be part of in government.” True, but I also hope that’s true of all of them. Garrett, as ever, is judged by higher standards.
Posted by Derek Barry at 11:54 pm

I'm not a supporter of Garrett or the ALP (just another capitalist party as far as I'm concerned), and I'm not very influenced by green (or Green) positions. But still I felt very frustrated by the criticism of Peter Garrett this week.

This goes back to the "religious" nature of the debate over nuclear energy and uranium mining. All types of power production have risks, costs and benefits, but nuclear power is treated as something that is, in itself, completely unacceptable.

This is instead of, for instance, a sober assessment of the risks of storing spent nuclear fuel compared with the benefits of a system of power generation that doesn't produce carbon emissions.

People who are automatically against uranium mining have denounced Garrett for his decision - and that shows they don't understand democratic politics very well. No political party advocating an anti-uranium-mining policy has ever been elected to power in Australia. We're constantly bombarded with accusations that politicians are liars, but in this case Garrett, a senior member of an ALP Government, has upheld the policy his party took to the 2007 federal election.

I feel frustrated because people opposed to uranium mining appear to expect Garrett to give them a short-cut. Instead of them doing the work to convince a majority of Australians that uranium mining should be abolished, they seem to want Garrett to sneak into the ALP and bring in policies that the party's conference explicitly has rejected. That's hardly democratic.

Worse, it shows that many people in Australia are willing to settle for a simplistic personalisation of politics, instead of bothering to understand why other people hold different opinions to them, and working out how to change those other people's minds.

1) I also feel frustrated by Peter Van Onselen's labelling of anti-development views as "Left". It's quite sad to me that today's political discourse appears bereft of the idea that being pro-development and pro-industry is a left-wing position. You can't share the wealth unless you create it first.

2) This is all crystal-ball gazing, of course, but I do wonder how much influence Garrett really does have, after having the two most important environmental issues in politics taken away from him and given to Senator Wong, leaving him as the "Minister for Plastic Shopping Bags". This wondering only increased on the day Garrett announced that the Four Mile mine would proceed - while Garrett was left defending a decision that was guaranteed to cause outrage among green-leaning supporters of the Government, Prime Minister Rudd was having a cosy, videotaped chat with former US Vice-President Gore about global warming (or you can click here to go to the page where the video is stored).

Australia is unlikely to have that risk assessment debate any time soon. It is too emotionally over-wrought a subject for discussion, despite the complexities introduced by the uranium mining, Lucas Heights and fission's ability to solve carbon base load problem.

But until it does address it honestly, Australia's position on the matter will remain hopelessly muddled.