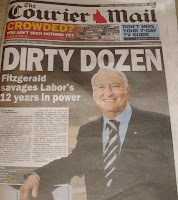 On Tuesday, Tony Fitzgerald returned to Queensland for the 20th anniversary of his landmark Inquiry to make a powerful statement about the nature of patronage and power. Fitzgerald’s extraordinary 1987-1989 “Commission of Inquiry into Possible Illegal Activities and Associated Police Misconduct” set new legal standards for commissions of inquiry. By giving indemnities in return for evidence, it not only exposed a corrupt police force, but also toppled the entrenched 32 year reign of the National Party Government. This week Fitzgerald was back in Brisbane to point the finger at Labor’s two decade domination of Queensland.

Yesterday the Courier-Mail repeated his speech in full as part of their long-running campaign against the state government. “Dirty Dozen” ran their page one headline (article not online) saying Fitzgerald's speech “savages Labor’s 12 years in power”. But Brisbane’s only daily newspaper somewhat missed the point he was making. Fitzgerald was not gunning for the government; he was issuing a warning to the people. It was based on the political history of the last 20 years in Queensland.

That was obvious from Fitzgerald’s first sentences. He began by praising Labor’s reform agenda in the early 1990s. The political program outlined by the Inquiry was pushed through by Premier Wayne Goss and his active Attorney-General Matt Foley. It was enthusiastically administrated in the revamped public sector by Glyn Davis and Peter Coaldrake (and by their fellow horsemen Kevin Rudd and Wayne Swan). As Peter Beattie would later say, the Fitzgerald Inquiry was Queensland's Berlin Wall. "It washed away an old regime and heralded in a new era."

But the new era didn't happen as fast as many would like. Fitzgerald did not mention the timidity of the first term in 1989-1992 when Goss was forced to move to the right to shore up the vote. And although he grew more confident in the second term, the voters misread it as hubris. Like everywhere else in Australia, Queensland swung to the right in the mid 1990s. Under newly installed state secretary Mike Kaiser, Labor hung on in the 1995 election by one seat. But in early 1996 the Court of Disputed Returns ordered the Mundingburra by-election in Townsville in February 1996. Labor lost that seat and with it their majority. To the surprise of most, Goss immediately resigned. He hoped he had "left Queensland a better place.”

But as Fitzgerald said, the new National government was uncomfortably similar in voters’ minds to the corrupt one who lost in 1989. After it was revealed that Rob Borbidge’s government had struck a deal with police to repeal many of the Goss reforms, they were turfed out at the first time of asking. Goss’s replacement, Peter Beattie, cobbled a majority with the support of independents. He also decided to move to the right to gain more certainty as premier. Beattie shut down the examination of the past and made peace with Joh Bjelke-Petersen. As Fitzgerald said, Queenslanders were encouraged to forget the repressions and corruption that had occurred and the social upheaval that had been involved in eradicating those injustices.

Labor’s return to power also marked the end of Fitzgerald’s influence in Queensland. In 1998 he “accepted” the time had come to resign and he moved to Sydney. Beattie claimed today that the real reasons Fitzgerald quit was because he missed out on chief justice and because he was annoyed with the friendship Beattie had forged with Joh.

But eventually Queenslanders forgot about Fitzgerald and reform. Beattie’s cause was helped by the resources boom. China was eager to import as much coal as Queensland could provide. Aided by ample funds in the exchequer and a tyro leading the opposition, Beattie won a landslide victory in 2001 and repeated it in 2004 and 2007. The sins of the past were forgotten in the largeness (and largesse) of victory. Fitzgerald says younger Queenslanders “know little of that era and are largely ignorant of the possibility that history might be repeated.”

And while Peter Beattie’s own personal probity was never an issue, he was let down by faction-appointed ministers. Also many of his advisors migrated out into business where their connections with the centre of power were highly valued.

Fitzgerald described the consequences: "Access can now be purchased, patronage is dispensed, mates and supporters are appointed and retired politicians exploit their political connections to obtain 'success fees' for deals between business and government," he said.

None of the scandals of the era touched the Teflon Premier. But after nine years in the job, Beattie suddenly had enough and quit in 2007. His wife Heather called him a “tired, exhausted man with bags under his eyes”. In an orderly succession, he handed over power to his deputy Anna Bligh.

Bligh hung on in this year’s election but recent events such as the Gordon Nuttall prosecution and the CMC (Crime and Misconduct Commission) report into renewed police misconduct have weakened her position. Bligh acknowledged this state of affairs in her own speech leading up to the Fitzgerald Inquiry anniversary. She said Fitzgerald’s Inquiry was the reason she entered politics. She hailed the $43m CMC and its broad mission to oversee and investigate allegations of public sector misconduct and major organised crime. There are also new FOI laws, a Lobbyists Register, new political donation laws, and laws banning ministers from holding shares or company directorships.

Bligh says the fact that the problems have been found shows that the system works. “The drive for reform is never over,” she said. And as Mark Bahnisch says, openness and transparency are not just the responsibility of the government. He reminds us the media also have a role. But Queensland media are not healthy. The Courier-Mail and ABC local radio have gone tabloid, the state 7.30 report has gone weekly and “there’s no new Quentin Dempster to put the pollies and coppers under the microscope.”

But Fitzgerald is saying we cannot afford to wait for new Quentin Dempsters to arrive and put probity under the microscope. “[E]ven if we cannot rely on politicians to voluntarily curb their excesses or tell the truth,” he wrote, “a well-informed community that is committed to doing so can influence the way it is governed."

"Bligh hung on in this year’s election but recent events such as the Gordon Nuttall prosecution and the CMC ... report into renewed police misconduct have weakened her position."

- perhaps it would not have renewed if FitzGerald had "made Chief Justice" ?