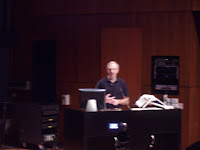 This is the third and final post about Friday’s “New Media and the Informed Citizen” symposium held at Brisbane’s South Bank. See links to parts one and two.

In his perceptive book Blogwars (2008), American academic David Perlmutter says that too many news and information blogs read like reporters’ notes prior to going to press. He quotes the famous dictum of Washington Post publisher Philip Graham who said that journalism is the first draft of history. Blogs, said Perlmutter, could now be considered the first draft of journalism. But where exactly blogging and journalism intersect has always been a thorny subject in the Australian political and media landscape and this was one of topics Graham Young touched on in his speech to the Citizen Byte forum.

Young is well qualified to speak to this theme having vast experience across blogging, the media, and politics. He blogs at Ambit Gambit, conducts online polling at What the People Want and is also the chief editor of one of Australia’s most important Internet journals, On Line Opinion. In the 1990s he was the vice-president and campaign chairman of the Queensland Liberal Party. He was successful too – the Liberals last election victory in 1995 occurred on his watch. But Young was always too iconoclastic to be a Liberal hero and is now outside the fold.

He began by discussing how the Internet was affecting Australian politics. He quoted the 2007 Nielsen Internet Technology Report which found the technology was pervasive and that 72 percent of all Internet users use it for news, sport and weather updates. However when he looked at the data, he found that despite the existence of thousands of political blogs, online users were consistently turning to existing media organisations for their news. In order of frequency the most accessed were (with Alexa ranking in brackets) Nine MSN (9), News.com (11), SMH (14), ABC (21) and The Age (26). The exclusively online organisations were well down the ladder with the biggest Crikey at 40,977 and Young’s own On Line Opinion further down at 142,137.

The message from this data, said Young, was that “tyrants rule” in Australia. Existing brands count, he said, as do the number of resources at their disposal, their national presence, and the fact that Australia is such a small and competitive marketplace. The few exclusively online operations that have been successful serve niche markets. Young also found that geographical proximity counted on the Internet and 30 percent of On Line Opinion’s users were from Queensland (which has 20 percent of total population).

This accentuation of the local was repeated in the Youdecide2007 citizen journalism project which Young was also involved with. This 2007 federal election site was an initiative of the Creative Industries faculty at QUT, funded by the Australian Research Council, and supported by project partners On Line Opinion, SBS and Cisco. The intention was to provide hyperlocal news and information on a seat-by-seat basis. However, audiences and stories from Queensland predominated (including the site’s one ‘gotcha’ story crategate) and this can be attributed to the fact the project was run out of Brisbane.

Young also noted how what he called Australian “para-parties” use the Internet. In the last election, 200,000 people joined the union-based Your Rights At Work campaign to fight the then-Governments Workchoices legislation. Activist group Getup! has an even bigger membership with 325,000 people registered on their books. Young disputes whether these are "members" in a traditional sense. He see Getup! as a harvester of e-mail addresses to which it then targets fundraising and single-political issue campaigns. According to AEC returns Getup! raised $1.2m in the election year of 2007 and it campaigned heavily (with mixed success) in the seats of Bennelong and Wentworth against Liberal heavyweights John Howard and Malcolm Turnbull respectively.

The mainstream political parties haven’t embraced the Internet as much as the “para-parties”. Young says there is a good reason for this – the old fashioned methods still work. TV ads and direct mail remain the most successful media campaign techniques. According to Young, Liberals used the Internet the most (with 44 percent of candidates having websites) with Labor second on 30 percent. Surprisingly, the minor parties such as the Greens and the Democrats were well behind, preferring to use their scarce funds on more traditional advertising. Despite their apparent net-friendly credentials, these parties were only too aware where the real priority was when it came to spending money. (This is not a unique Australian problem; Perlmutter notes in his book that despite being a very adept blogger, Iowa Democrat governor Tom Vilsack was forced to drop out of the 2008 presidential race because didn’t have the money to buy television time).

Young then turned his attention to what he called the problem of “the failure of the blogosphere". He gave his version of an a-list of blogs he called “the domain” which included Larvatus Prodeo, Jennifer Marohasy, Homepagedaily, John Quiggin, Club Troppo and Henry Thornton. Young said that with the possible exception of Thornton who writes a fortnightly column in The Australian, none have successfully made a breakthrough similar to US blogs. Possible reasons for this include their point-of-view, a competitive market, the unwillingness of the MSM to interact, and the lack of a sustainable financial model. Young conceded some polling blogs have succeeded in impacting the agenda but he said this was hardly a mainstream interest. He also suggested that the highly educated people that ran most of his “domain” blogs may not be talking about the issues relevant to everyday Australians.

Because, he said, in the mainstream “brands count”. Media companies rely on severe audience inertia acting against change. Commercial television stations know that the 5.30pm slot is the most important because if they can lock in viewers prior to the high cost ads of the 6pm news, the likelihood they won’t change the channel – remote or no remote. Other issues affecting the ability of blogs to impact on politics here include the central control of party funding and candidate selection and the fact that Australia, generally speaking, is well run. What that means is that people generally don’t need to think about politics in daily life – they have more exciting things to do. The reason almost 100 percent of people voted in Iran’s recent election, said Young, was because there was a burning desire to fix a problem. The same desires don't exist here. The blogs have their community but have not crashed through to a greater public. According to Young, "the days of the Interknight errant never arrived”.
Posted by Derek Barry at 11:10 pm

Interesting. It needs to be noted that John Quiggan writes a fortnightly column for The Australian Financial Review, but he was doing that before he was blogging, because he was established as a left-Keynesian "alternative" economic commentator (a position that is not so alternative in 2009).

And I also think that Young underestimates the leakage of blog opinions into the mainstream press both as quoted sources and occasional op-ed contributors.

It also doesn't take into account the growing influence of academics and experts taking up blogging. I'm thinking here of the likes of The Interpreter (Lowy think-tank on foreign affairs), Core Economics (Joshua Gans and co), Stilgherrian and others on technology and your own blog on new media matters.

Having said all that, it is difficult to argue with Graham's central point that Aus blogosphere hasn't had the major impact on the body politic bloggers would have liked

I read some Australian political blogs and quite a few American ones, and as far as I can tell the Australian ones don't have much influence because they're really not very good. I haven't found anything to compare with Glen Greenwald or Daniel Larison or Matt Taibbi. The effective bloggers seem to be the ones that have principles of their own and comment from that perspective, instead of just chiming in on the latest storm-in-a-teacup that Malcolm and Kevin are working on. Australian politics doesn't need hangers-on, it needs fresh ideas.

Hi Derek, thanks for the write-up. A pretty accurate take of what I said - more logically bundled.

When I was talking about blogs I was really thinking of commentators who are predominantly online, not organisations who use a blog as part of their corporate communications. Blogs as media releases can have a significant effect, but the community of bloggers doesn't appear to have much impact. (And I say that as a blogger myself).

I'd agree with Friendless that most of the Australian blogs aren't very good. I was suggesting in the speech this was a function of population size and the difficulty in making any money out of it. I also think most bloggers are far too derivative - they tend not to break stories.

Apart from the factors above this may also have something to do with our defamation laws - something I didn't touch on.

Thanks Graham, to be honest I wasn't sure how you'd read this!

But I'm not sure I agree with Friendless.

I think there are lots of Australian bloggers out there who are principled and whose writing is informed by those principles.

Whether that makes them any "good" is a matter of taste.