Coagh and the Twelfth: A snapshot of Orangeism in Northern Ireland 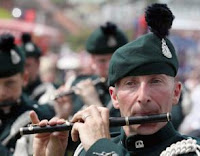 One of Brisbane’s lesser known organisations is the “Somme Memorial – Brisbane” which meets every month in the city. It is a meeting of Orangemen, a Protestant fraternal order which takes its name from the Dutch-born British King William III. The Brisbane marchers gather at the Anzac War Memorial to commemorate the thousands of Ulster casualties in one of the First World War’s bloodiest battles. By wearing the sash and playing the fife, they follow a tradition that has been active in Australia since the earliest colonial days.

A sense of history is crucial to Orangeism and this applies as much to its farthest flung followers in the Sunshine State as much as does to its heartland in Northern Ireland. Brother William Wright, the former Grand Master of Australia, was in Northern Ireland to celebrate the Orange Order’s biggest day. This Sunday was 12 July, the 319th anniversary of the Battle of the Boyne which effectively destroyed King James II’s hopes of wresting away William III’s stranglehold on the British Crown. But because the battle took place north of Dublin and because James was a Catholic the event is primarily commemorated as a victory of the Protestant supremacy in Ireland.

12 July is a public holiday in Northern Ireland and a flashpoint for the tenuous relations between the religions in the province. This was true before the Troubles started and as events in Belfast showed is still true today after they have supposedly ended.

Outside Belfest, the event passed off peacefully. On Sunday, Brother Wright joined 10,000 people who lined the streets of the tiny market town of Coagh, Co Tyrone for the Orange Day parade. It was the first time in seven years the Twelfth of July parade had come to Coagh. It was the largest in the county with fifty-four bands, and an Ulster-Scots concert swelling the village that normally has 500 inhabitants.

It was a welcome change of fortune of a town that has seen its fair share of murder during the 30 year war. All sides suffered. Even in the midsixties, Coagh gave the province an ominous hint of what was to follow. In the winter of 1965, Northern Irish Prime Minister Terence O’Neill was keen to establish détente with the regime in Dublin. He caused consternation among hardline Protestants when he invited Taoiseach Sean Lemass to Stormont (among those offended was a rising star named Ian Paisley who threw snowballs at the visiting dignitary’s car). When Unionist Mid Ulster MP George Forrest addressed the Coagh 12 July march in 1967 he was jeered as he tried to pay tribute to O’Neill. The indignant Forrest threatened the crowd with his chair only to be dragged off the platform, kicked and left unconscious.

When full-scale violence did erupt across the province a couple of years later, it wasn’t long in coming to Coagh. In 1972 the Official IRA had declared a ceasefire but continued its attacks against the British for another 12 months in what it justified as “defensive actions”. In October that year, two of its veteran members John Pat Mullan and Hugh Herron were stopped at a British Army checkpoint in Ardboe near Coagh and arrested. According to IRA reports, the RUC advised the Army that the men were considered dangerous and should be “eliminated”. Herron was shot dead at point blank range and Mullan was shot while trying to escape.

The war mostly passed Coagh by for the next 17 years. On 7 March 1989 the peace was rudely shattered. Motor mechanic Leslie Dallas was at work in his garage in town talking to two men. Dallas was the closest thing the town had to a celebrity. He was a former European hot rod champion and still an active participant in the local hot rod circuit. His two visitors were a 72 year old pensioner and a 61 year retiree. The two men were chatting to Dallas about his second place finish in Ballymena that weekend. Their conversation was put to an end by a motorised IRA unit. They shot dead all three. The attack while shocking, wasn’t completely random. According to Brendan O’Brien’s "The Long War", Dallas had a shady alter ego and was a senior leader in the Protestant paramilitary group the Ulster Volunteer Force (UVF). The two pensioners were collateral damage.

The UVF retaliated six months later. The Battery Bar is a quiet pub a few miles out of Coagh at Moortown. It was the haunt of IRA member Liam Ryan. A UVF force ambushed the pub on 29 November and shot dead Ryan. Again there was collateral damage. A Catholic civilian Michael Devlin was standing too close to Ryan and he died of gunshot wounds. 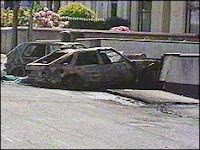 More bloodshed followed in 1991. Three IRA members “on active service” (as a pro-IRA site describes it) were driving towards town when it was ambushed by an undercover British Army SAS operation. By then the technology, surveillance and undercover operations of the secret 14 Intelligence Company known as “The Det” (for detachment) was seriously undermining IRA capability. The SAS were expecting the IRA men in Coagh. They fired 200 rounds of ammunition into the car. All three died.

Incidents such as Coagh were instrumental in bringing the IRA to the negotiating table in the mid 1990s. The result was the Good Friday Agreement and the remarkable sight of a snowball-less Ian Paisley sitting down in Government with IRA members. But while political progress has been astounding, it is taking longer to bring the community out of the years of hate. The Orange Order with its strident triumphalism remains a lightning rod for Catholic rage. Coagh knows that only too well. Its Orange Hall was badly burned in an attack in November last year.

But cultural change is following political change. There are attempts to rebrand the marches as a tourist friendly “Orangefest”. Drew Nelson of the Orange Order of Ireland told The Independent that they wanted to turn it into a community festival. “"We went to Notting Hill Carnival, to learn from that,” he said.

If I presume he is not referring to the riots, I am being overly cynical. Writing in the Belfast Telegraph yesterday Ed Curran called Orangefest a step in the right direction. He asked who would have believed five years ago the EasyJet inflight magazine would promote the 12th as one of the Belfast’s attractions. “We need to leave behind the Julys of confrontation,” he wrote. “And, if we can, perhaps future Twelfths will be promoted in not just one airline’s travel guide but in many other international tourist brochures.”
Posted by Derek Barry at 11:32 pm