Fieldnotes: The fastest media anthropology in the west

My first week working in Charleville is coming to end and it’s been quite a ride. Tomorrow there are photographs to take of a double family celebration: a wedding followed by a catering-saving bride’s Mum’s sixtieth. Then there are the bowling and golf pages to fill with pics on Sunday - though I’ll come back to the golfing pics. There’s also a market to cover in Historic House tomorrow and someone is replacing the cricket nets at the Catholic School. Tonight was a night off at the Cosmos Centre night observatory with its new retracting roof where I saw the beautiful outback night sky. I also saw Saturn’s rings, Alpha Centauri’s twin stars, the Moon’s terminator, the Butterfly Cluster, and finally Jupiter rising, which for a while I thought had to be distant street lights. Even at the observatory, I couldn’t help myself and offered to come back and write a story about it. It was all in a weekend’s work for a temping journo at a weekly rural paper.

The Western Times is a good little paper that comes out each Thursday (recommended price $1) but it needs to be complete for the printers by Tuesday night. This Times employs only one journalist but that's ok - Charleville has lots of occupations where there is only one of you. I’m here for nine days and with a bit of help at the beginning and the end, it’s mostly my role to put together one and half newspapers over three cycles. Unfortunately, or perhaps deliberately, there's no editorial content on the website. My first two days here were spent completing this week’s paper. It was mostly the work of another blow-in, himself replacing the regular journo the week before. He left me Tuesday morning and it was a race against time for me to proof all the articles for the lovely sub-editor in Toowoomba and then match them for her with photos I hadn’t taken. But Patience was her middle name, she said, and we got there in the end. Because this edition passed through several hands, a few things fell through the cracks. The article about the upcoming bi-annual Hungerford Field Day was missing as the organisers politely reminded me yesterday. It will be in this week, I promise - as soon as I can figure out a way of avoiding saying Hungerford three times in the opening sentence.

A bigger problem was the missing Charleville golf notes. The golf correspondent had sent an email on Monday with the weekend results but it wasn’t picked up. Worse still, the golf photos did make the paper but had the wrong names captioned against them. This was NOT the President’s Cup, as the correspondent told me in no uncertain terms yesterday. I promised to put a grovelling apology in next week to save me from the wrath of the local Press Council. Mind you, I'm being very unfair - the lady is not the Golf Nazi I’m painting her out to be. After all, she did offer to take the photos herself for me this week, an offer I’ve gladly accepted.

That will be one less worry for my paper due to be finished on Tuesday. Of course, I’m exaggerating when I say it is mine. I don’t have to worry about the classifieds for starters – thanks to the wonderful divisions between newspaper church and state, filling the advertising side of the paper is not my problem. The wonderful Dearne runs the office like clockwork and I refer all the really hard questions such as “how much is a health and beauty notice?” to her.

All I have to worry about is the editorial side. Here I rely on a vast quarry of press releases, Google alerts and local correspondents to get me over the quandary of filling 15 pages of newsprint in a week. The network of unpaid local stringers is vital. The geographical reach of the Western Times is enormously vast. Centred on Charleville, it stretches out several hundred kilometres in every direction: south to Cunnamulla and the NSW border, east to Mitchell, north to Augathella and Barcaldine and west to Quilpie and the one (and several) horse stations beyond. Not sure about the Google alerts which are emailed daily (or can be read as RSS in real-ish time). Most of the alerts for “Charleville” refer to the town for which Cork-born Surveyor W.A.Tully named it. While I found lots of evidence that the bitter Irish recession is hurting industry in rural Cork, one of the few alerts for the Australian version was for my own blog entry of last night "Charleville on the Rocks”. The alert for “Blackall” had nothing for my town 250km north but did have several synonyms including the Blackall ranges in the Sunshine Coast and a Kiwi who writes a lot under the name of “Leigh Blackall”.

But while Mr Google wasn't much use, the press releases are a life saver. They are especially useful when they have accompanying pics or look like they’ve been written by ex-journos who know what is newsworthy. PR flaks vastly outnumber paid journalists so its pointless taking them on. All I have to be is the gatekeeper and choose the relevant ones. There are generic rural pages in the paper where I can just grab press releases whole and plonk them in without worrying about understanding the terrifying detail of why prickly acacia is an invasive weed or why 15-17 micron wool is Queensland’s finest. Yeah sure, the writers are taking a paid position on something, but it’s a position I don’t know enough about to refute. They also give me plenty of other material to work with and, more importantly, people to talk to. Press releases are life savers. After working a week here, I know I’ll never refer to PR as “the dark side” ever again (well, at least not for a few weeks). 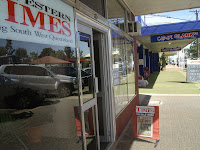 The regular journo is back on Thursday so I’ll help him with a start on the following week’s paper before I make the long drive back to Brisbane on Friday. He is on holidays because he is moving house but has popped in a couple of times to check on my progress. He told me the biggest difficulty is sometimes finding suitable stories for the front and back pages and he has often been found in the office late on a Monday without a story for either page. So I was delighted to report to him yesterday that I think I’ve got both for this edition.

The front page was a present from Toowoomba. A journo at The Chronicle there (a fellow APN paper like the Western Times) rang me up asking if I’d heard about a Charleville exporter story. The owner claimed he might have to shut down his factory because the government won’t extend the stay for the many Vietnamese workers he employs on 457 visas. I hadn’t heard the story. To be fair to Google alerts, the ABC version of the story did eventually appear in my inbox later that day, but the moral appeared to be to listen to the local radio rather than watch Sky News in the motel.

My mate at The Chronicle wasn’t entirely sure if the exporter’s story was accurate and he was checking the Government’s side of the story. There was something in it for both of us and we both contacted the exporter. I went out in person and got photos which the Chronicler was delighted to use. In return I’m hoping to get his government quotes on Monday to round off my tale. Win-win, as they say in wankword bingo.

With the front page cooking nicely, it was time to turn the paper over in the oven. I was delighted to get a proper football story on the back page, though it had to be translated as “soccer” for local consumption. Turns out that Charleville has a new football sorry - soccer - field and it will be officially opened next weekend. And as a local council official and football aficionado told me, it will be unveiled with a Chelsea training camp for local kids. It’s not quite as exciting as the glossy flyer featuring goal-celebrating Chelsea stars would suggest. Michael Ballack, Ashley Cole and Nicolas Anelka won’t be appearing in the outback any time soon. But the coaching clinic is sponsored by the London outfit and one of the coaches has some role at Chelsea, apparently (though I’d never heard of him). Despite the tenuous connection, the temptation for a “Chelsea comes to Charleville” headline was almost irresistible until my council contact said that might be underwhelming for rugby-league mad locals. When he told the kids that “Chelsea was coming to Charleville”, he said the response he got was: “who is she?” Well, whoever she is, she’s staying on the back page and we got pics of the kids out playing kickabout on the new field today to prove it.

Photos are everything out here and there are more stories needing photographs than there are of photos needing accompanying stories. Take for instance the ones I took of the local senior citizens enjoying the “Healthy Ageing” program at the community centre earlier today. They will all be used in the paper with just a caption each and everyone will have a lovely time just looking at them. If there is a story here at all it was not fit for The Western Times, because it was about me blundering into the venue and being unable to announce who I was because the entertainment was singing karaoke at the time. I took the photos of a couple of dozen or so blinking ladies but was undone when the on-stage maestro decided I needed to be part of his act. The inestimably talented crooner Clayton Lee Travis demanded my presence on his makeshift stage during his Classic Country Morning Melody Show and shoved the mic in front of my nose. He insisted I sing the karaoke unaccompanied. I was horrified but he would not accept the excuse I could not sing to save myself. Up to that point, I had not really been listening to what song he was singing. But suddenly I had to belt out the last chorus to the Green Green Grass of Home to the increasingly bemused audience. After the torture was over, I avoided the stares of the poor old dears who had to listen to my decidedly un-dulcet tones and made a speedy retreat to the green, green grass of my home office. Easy listening, it wasn’t.

But I expect I will even recover from this, eventually. There is so much going on out in the West when you look carefully. And while I only have nine days to look this time, I’ll definitely be back for more, maybe in another outback town.
Posted by Derek Barry at 12:33 am

sorry to be clouding over your search and monitor of things to do with Blackall.

I guess you are watching the Wikipedia page and discussion? The history says it is getting semi regular edits and there is a little bit of discussion inviting the editors into other related projects.

Then there's the Wikitravel page - badly in need of some loven.

Predictably, Aust National Archive's own search engine is useless, but a site search of it using Google reveals things that may be of interest.

Not your fault, Leigh! And thanks for all the tips on my Blackall.