Meddling in internal affairs: Rebiya Kadeer, China and the MIFF

On the afternoon of 5 July internal affairs in the far north west of China turned violent and ugly. Thousands of angry citizens had taken to the streets of Urumqi, Xinjiang to protest the killing of two Uyghur workers in Guangdong. Suddenly there was a flashpoint and matters turned violent. Fights led to gunfire. Eventually 184 people died, and another 1,600 were injured. Both Han and Uyghur alike suffered amid claim and counter-claim whose fault it was. It was the worst ethnic riot in China in decades.

China was anxious to blame the separatist movement for the riot. “The violence was masterminded by the separatist World Uyghur Congress led by Rebiya Kadeer”, exclaimed the official state mouthpiece Xinhua. Though their nominated culprit was inconveniently located in North America at the time, the regime seemed happier to scapegoat her rather than scrutinise the role played by the thousands of soldiers it had sent in to the city.

China also scolded Muslim Turkey for expressing its anger over events affecting their ethnic Turkic brothers and sisters in Xinjiang. They were denounced, alongside all other foreign critics, in the time-honoured fashion of “meddling in internal affairs”.

Perhaps China now considers Melbourne as an internal affair. Last week it demanded the Melbourne International Film Festival (MIFF) censor a film about Kadeer. On Friday, Chinese consular officials telephoned Festival director Richard Moore and asked him to justify its inclusion of a film about the “criminal” Rebiya Kadeer in the festival. China urged Moore to withdraw the documentary "Ten Conditions of Love" by Melbourne film-maker Jeff Daniels about the exiled Uyghur.

Moore was nonplussed. “I didn't have any reason to justify the inclusion of the film in the festival,” the MIFF director told the consulate. Nor did he need one. The film will be rightly shown - its cinematic merit is justified on the subject matter alone. Melbourne will get the opportunity to see the documentary in a fortnight. Kadeer will be here herself to talk about it.

She currently lives in Washington State where the vastness of the Pacific separates her from China. Xinjiang is further away still. Rebiya Kadeer was a successful businesswoman and an activist for a people that were being swamped in their homeland by Han Chinese. In the 1990s she founded and directed a large trading company in north-western China. She was not only a champion for the rights of Uyghurs but became one of the most prominent women’s rights advocate in all of China. These activities came to an abrupt halt in August 1999. She was arrested and charged with harming national security. In a charge that sounds as disturbingly vague as that of Stern Hu affair, Kadeer was thought to be “providing secret information to foreigners”. Thumbing their nose at America, Chinese authorities waited until she was about to meet a group of US congressional staff on an official visit to China before making the arrest.

She was found guilty and got eight years. It was reduced to seven in 2004.

In 2005 she was released as part of a deal with the US on the grounds of “medical treatment”. Kadeer has now recovered. But the medical treatment that Kadeer really wants is the healing of her oppressed people. 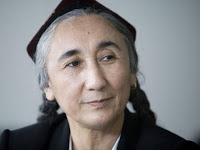 The Christian Science Monitor interviewed Kadeer last week. She told them the riot wasn’t her fault. The Uyghurs were provoked by the police, she said. She also thought that plain clothed agents launched the riot as a false flag operation to give China the excuse to justify a larger crackdown. Maybe or maybe not - but it is no less plausible than saying she launched it.

Kadeer knows the old Chinese Communist state was bad. But the current model is worse: the Party has shred the last vestige of political philosophy in a naked grab to maintain power. It now relies on nationalism for fuel. China aggressively promotes its vision of Greater China and uses western mediatisation methods to enforce the vision on the homeland.

The most important skill China learned from the West was how to control your image. This is a primary consideration of politicians the world over. Former British civil servant Christopher Foster told in 2006 how media pressures had changed New Labour’s Cabinet meetings. The meetings were shorter and were no longer about decision making but instead reviewing the media impact of decisions already made.

The Chinese have also made a decision. Xinjiang is an internal province. But to the World Uyghur Congress the area is East Turkistan. With an articulate spokesperson like Kadeer on the loose, China knew it would be difficult to sell its message. Kadeer was careful never to attack the regime (she left that to her husband Sidik Rouzi). Instead her tactic was to get under their skin realising the Chinese were not leaving East Turkestan any time soon.

“I am extremely grateful for both Han and Uyghurs that protected each other in the riots,” she told CSM last week. “That should be the true relationship we should have with each other. But this Chinese government has created such a tragic situation, that it is not happening, generally, as it could.”

She is right. As state security, the Chinese Government were ultimately responsible for the deaths in Urumqi. This outcome is something they may repent in leisure. They may not be able to control ethnic tensions they have created even with their media sophistication.

The MIFF deserve praise for not buckling to the pressure. Kadeer is an important voice that speaks for more than just Uyghur values.

“Under Mao, during the Cultural Revolution, Uyghurs were badly treated.” Rebiya said. “But [at least] we could speak our language.”
Posted by Derek Barry at 11:10 pm