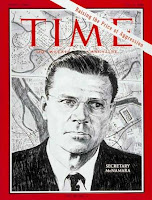 In every decade of his long public life Robert Strange MacNamara was at the centre of whatever the world’s most intractable problems were at the time. In the forties, he dealt forensically with fascism. In the fifties he used market research to put some sense into the newly booming car culture. In the sixties he was on the front line of the Cold War and in the seventies he ran global finance at the World Bank. Towards the end of his always busy life he campaigned against nuclear arms and worked on solutions to reduce poverty.

His death at 93 earlier this month robbed the world of one of its great technocrats and fiercest thinkers. But almost every obit focussed almost exclusively on the 1960s and the flawed nature of his leadership of the war in Vietnam. His seven year role as a Kennedy-appointed Defence Secretary was also central to the documentary SBS showed in his honour tonight. The Fog of War is Errol Morris’s Oscar-winning 2003 documentary about "11 lessons from McNamara’s life".

The “fog of war” was coined by the nineteenth century Prussian military thinker Carl Von Clausewitz. In his magnum opus On War, Clausewitz warned about the uncertainty of all data. It was a peculiar difficulty, he said, because all action is “planned in a mere twilight, which in addition not unfrequently—like the effect of a fog or moonshine—gives to things exaggerated dimensions and an unnatural appearance.” McNamara could certainly identify with the chaos of war as seen by those immersed in some component of it.

Much of McNamara’s time as Defence Secretary (1961-1967) were spent immersed in a war fog of one kind or another. His recollections to Morris were an attempt to view the fog through the clarity of hindsight. But while McNamara was happy enough about the title he was not happy about the 11 lessons subtitle. Morris put these in very late in the editing process. McNamara complained bitterly to him, “these are not my lessons; these are your lessons”. But Morris would not take them out, he was making a movie and was determined to paint the story as he saw fit. “It's a Horatio Alger story, Morris told Tom Ryan, “the story of a man who comes from relatively humble origins – his parents didn't finish high school – who becomes this incredible achiever”. Morris called it a very powerful story about a man who believes in rational solutions to economic, social and political problems.

McNamara saw a lot of action in the Pentagon hot seat. He had to deal with the Cuban Missile Crisis, the assassionations of Ngo Dinh Diem and Kennedy within a month of each other, the difficulty of doing business with Johnson, the Gulf of Tonkin incident which escalated the war in Vietnam, and the authorisation of the deadly herbicide Agent Orange in that war. He attempted to rationalise his way through all of these difficult decisions. But in one of the lessons of Morris’ film he is forced to admit that “rationality will not save us”.

Yet there was little evidence from the rest of McNamara’s life that he had abandoned his belief in rationality. His 13 year reign as President of the World Bank transformed the stuffy cautious institution he inherited. The Bank began to address problems of income disparity and poverty. It diversified into sectors of activity where progress was inevitably slow and unspectacular. It was also taking more of an interest in the economic and social conditions of its borrowers. McNamara called the bank "an innovative, problem-solving mechanism…to help fashion a better life for mankind in the decades ahead." 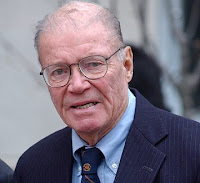 Though McNamara still had two decades of his own life to shape after 1981, Vietnam continued to haunt him and dominated the public discourse about his legacy. 25,000 Americans and a million or more Vietnamese died during his reign as Secretary of Defence. He claimed his role was to soften President Johnson’s hawkishness. But he told his biographer Deborah Shipley he was never sure enough of his doubts about Vietnam to act on them.

McNamara knew his was a tough reputation to defend. But defend it he did using Shipley, Morris and many other proxies to tell his story. He also wrote his own memoir, In Retrospect published in 1995. Morris probably got his “lessons” idea from this book which was subtitled “The tragedy and lessons of Vietnam”. McNamara claimed it was a book he planned never to put on the public record. He did not want to “appear self-serving, defensive, or vindictive” and found it hard to face his mistakes. “But something changed my attitude and willingness to speak,” he wrote. “I am responding not to a desire to get out my personal story but rather to a wish to put before the American people why their government and its leaders behaved as they did and what we may learn from that experience.”

Writing about the book, Noam Chomsky witheringly noted that McNamara did not have much of an idea of what was going on around him, neither then nor now. And to some degree this is true, McNamara has always been embroiled in the fog of war. But what Chomsky does not deny is that McNamara was at the centre of major decision making constantly confronted by the uncertainty of the data he was using. He may not always have been right, but he could always plausibly justify his course of action. This alone makes him worth learning from.
Posted by Derek Barry at 1:29 am