Stephanie Rice and South Ossetia: Of bread and circuses 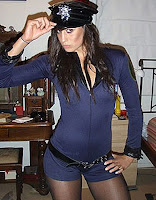 Twenty-year old Stephanie Rice took out Australia’s first gold medal in the Beijing Olympics on the same day as Russia intensifies its war with Georgia. No connection really, though you’d have to ask which you’d rather read about if you didn’t have a dog in the fight. Rice has glamour in spades, while the South Ossetian conflict merely has spades.

Stephanie Rice is a full-on media figure, whose mistakes, or blessings, include publicly dating other high-profile swimmers and posting police uniform poses on her Facebook page. But yesterday, she swam a 400m individual medley in a time of just under four and a half minutes. It was the fastest ever at that event and won the gold medal. The silver went to Kirsty Coventry, a white girl from the stolen nation of Zimbabwe. Coventry not only did well for the pariah state, it was also the first medal of any colour in the Beijing Olympics for the entire continent of Africa.

But while most of the eyes of the world are on the various complexities of Beijing, elsewhere nations of the world are at war. Such war is in direct violation of the Olympic truce, the concept of ekecheiria (“holding of hands”) that was enforced during the ancient Olympics. Although some historians now say the idea that ancient Greeks stopped their wars for the Olympics is a nonsense, it hasn’t stopped aid agencies calling for a modern Olympic truce. In 2007 China sponsored UN Resolution G/A 62/L.2 "to promote peace, dialogue and reconciliation in areas of conflict during and beyond the Olympic Games period."

But the nations of Russia and Georgia are not interested at the moment in promoting peace, dialogue and reconciliation. Instead they are engaged in a slowly escalating and complex conflict that has the potential to drag in the wider international community. The war is not totally unexpected, though I got it wrong in May when I thought the flashpoint would be Abkhazia.

Instead the fight is happening several hundred kilometres inland. But South Ossetia is not too dissimilar from Abkhazia. Both are breakaway republics with leanings to Moscow, but for which the rest of the world still believes belongs to Georgia. The name "Georgia" itself is western European and of disputed heritage. The locals call themselves Kartvelebi and their country Sa-kartvel-o “the land of the Kartvelebi”.

Next to the Kartvelebi live the Ossetians. Ethnic Ossetians speak a language similar to Persian (Farsi). But in the Soviet Union 1991 divorce settlement, it was broken up into North and South with North Ossetia given to Russia and South Ossetia given to Sakartvelo. Ever sensitive to names, Georgian see the use of the word "north" in the title North Ossetia as misleading. In their eyes, the Russia owned North Ossetia is the only Ossetia. Georgia prefers to call South Ossetia by either the ancient name of Samachablo or, more recently, Tskhinvali region.

If given the choice, Ossetians would probably rather be free of both Russia and Georgia. But that is the least likely outcome. Georgia has sovereignty in its favour and the cosying up with NATO. But pro-Western Georgian President Saakashvili has overplayed his hand. An actual war in South Ossetia or Abkhazia would mean disaster for Georgia. Both republics have been defacto independent nations since the 1990s. Russia has more natural sympathy among the local population and is more powerful locally. In this new cold war theatre, Russia will now use the Ossetian excuse to dismiss Saakashvili as a bargaining chip to withdraw.

But the media’s attention will be more on Beijing than Tbilisi. Amusingly, one media may have given the impression the Georgia at risk was in the US’s deep south, though when I checked the source AFP story this evening, the Google map was even more bizarrely pointed to Brno in the Czech Republic. For now Saakashvili must cut his losses, consolidate his country's fragile growth, address local abuses such as police brutality, and hope his connections with NATO will stop Russia from invading. Meanwhile, back in Beijing, Stephanie Rice’s exploits will be honoured with an Australian postage stamp.
Posted by Derek Barry at 10:48 pm