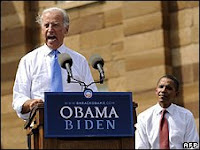 Barack Obama formally announced Delaware Senator Joe Biden as his running mate at a rally in Springfield, Illinois yesterday. The news had first been released in the form of emails and text messages sent to millions of supporters earlier in the day with Obama hailing Biden as a “distinguished leader”. The 65 year old six-term senator offers an obvious differentiating factor to Obama with Democrats calling out his vast political experience especially in the field of foreign affairs.

The McCain campaign immediately went on the offensive calling the choice of Biden an admission that Obama was not ready to be president. While John McCain called Biden “a wise selection”, his spokesman Ben Porritt was less conciliatory saying Biden was a harsh critic of Obama. "Biden has denounced Barack Obama's poor foreign policy judgment and has strongly argued in his own words what Americans are quickly realising - that Barack Obama is not ready to be president,” he said. The McCain camp followed this up with an attack ad of footage of Biden criticising Obama.

Nevertheless, Biden is a carefully considered choice. With just three electoral college seats in a north-east state that were likely to go to the Democrats anyway, Delaware was not an obvious match for the Illinois presidential candidate. However Biden’s has three crucial aces in his pack that made him the stand-out choice to support Obama. Firstly his tenure as chair of the Foreign Affairs Select Committee gives him international gravitas sorely lacking in the younger man. Secondly his appeal to working-class Americans may see him pick up votes for the team that went to Hillary Clinton in the primary campaign. Thirdly is the fact that Biden is a native of Pennsylvania, one of the crucial swing states in the election.

Biden himself has run for President twice, firstly in 1988 and again this year. In 1988 his campaign was sensationally cut short when it was discovered one of his speeches was plagiarising British Labour leader Neil Kinnock. Just days later the New York Times reported Biden had also plagiarised a law review article in his first year university law course. When Biden compounded the problem by claiming his degree was better than it was, he was forced to withdraw from the campaign blaming “the exaggerated shadow” of his mistakes.

Biden came out of the shadows twenty years later and announced he would run again for president in early 2007. This brought him directly into contention against Barack Obama who, like Biden, was then seen as an outside chance compared to Hillary Clinton. Biden had just spearheaded the Democratic pushback against President Bush’s plan to increase troop levels in Iraq and was keen to establish his credentials in this area against the other candidates. In February 2007 he told the New York Observer that Obama was “articulate and bright and clean and a nice-looking guy” but doubted whether American voters are going to elect “a one-term, a guy who has served for four years in the Senate.”

But Biden’s own presidential campaign never got off the ground. Biden was a solid enough performer and avoided the mistakes of 1988. He probably had the best quip of the campaign when he said of Rudy Giuliani “there’s only three things he mentions in a sentence: a noun, a verb and 9-11.” He was also contemptuous of the neo-con agenda and called Bush “brain dead”. However he was forced to withdraw from the race after picking up just one percent of the Iowa caucus delegates.

Now it will be Biden’s job to sell Obama despite the inexperience problem he himself had diagnosed a year earlier. Plenty has changed since then including Biden’s own views. In June he told NBC’s Meet the Press he was interested in the Vice Presidential position. "If the presidential nominee thought I could help him win — am I going to say to the first African-American candidate about to make history in the world that, 'No, I will not help you out like you want me to'?” he said. “Of course...I'll say yes."

It will be Biden’s job now to heal the faultlines the primary campaign exposed in the Democrats. Obama drew on overwhelming support from blacks and his strengths are among well-educated and middle class voters. Primary exit polls also showed mass support among the under 30 year old voters. Biden can help with the white, ageing underclass that Hillary Clinton won and that might be otherwise tempted to sway to McCain. He will be an effective attack dog without being “all that exciting”. With the media parsing every utterance from the candidates from here to November, a safe and steady run-in is precisely what the Obama campaign needs now.
Posted by Derek Barry at 9:03 pm