The French-based media watchdog Reporters Sans Frontieres (RSF) made an unauthorised radio broadcast into Beijing just hours before the Olympic opening ceremony. The activist group say they used miniaturised transmitters and a home-made antenna to broadcast on an unused FM frequency. They aired 20-minute program in Mandarin, English and French and listeners heard Chinese human rights activists urging government to relax state control of the media. RSF secretary-general Robert Ménard also spoke on the program which began at 8:08am local time exactly 12 hours before the opening ceremony.

In the broadcast Robert Ménard called on the Chinese Government to respect free speech. He said China refused to issue visas to ten RSF members but this has not stopped them from making themselves heard in Beijing. Menard claimed it was the first non-state radio station to broadcast in China since the Communist Party took power in 1949. "Reporters Without Borders devised and carried out this protest in a spirit of resistance against state control of the media,” he said.

Another journalist advocacy body, the Committee to Protect Journalists (CPJ) expressed their concern that China was refusing permission for an American-Tibetan journalist to attend the Games. They say Dhondup Gonsar, an American citizen of Tibetan ethnicity who works for the U.S. government-funded broadcaster Radio Free Asia (RFA), has not yet received press accreditation from Olympic organisers. Gonsar is currently in a hotel in Hong Kong, waiting for his papers to enter China. “The IOC (International Olympic Committee) has promised RFA that two of our reporters could cover the Games. I don’t understand why I have not gotten my IOC accreditation and am not allowed to cover the Games,” Gonsar told CPJ. “Maybe it has something to do with my ethnicity as a Tibetan.”

Their broadcast came as Human Rights Watch weighed in claiming a sharp increase in abuses in human rights and media freedom directly linked to China’s preparations for the games. They pointed to several examples including the intimidation and arrest of protesters against forced evictions, protesters against demolitions, harassment of foreign media in the wake of the Llasa riots, and a crackdown on Beijing’s “undesirables”. Sophie Richardson, Asia advocacy director for Human Rights Watch said China and the IOC have wasted a historic opportunity to use the Beijing Games to make progress on Chinese human rights. “That failure has damaged the prospects for a legacy of enhanced media freedom, greater tolerance for dissent, and respect for the rule of law,” she said. 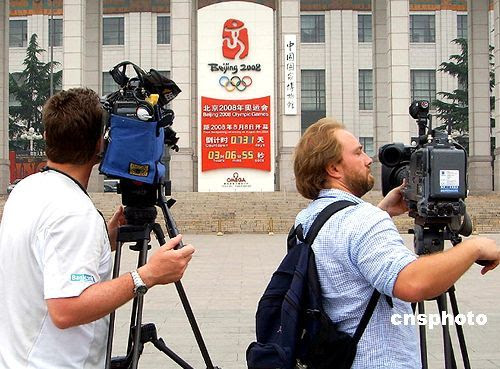 Staffordshire University’s Professor John Herbert says that the media in China is a branch of government and that is how politicians see it. China’s newspapers are all state owned and virtually all printed material is first scrutinised by Communist Party officials. Prior to the handback of Hong Kong, the Xinhua news agency acted as a defacto Chinese embassy employing hundreds in news-gathering and intelligence functions. Herbert says China has a habit of increasing their grip on the media in times of sensitive anniversaries such as the founding of the People’s Republic, the Tibetan uprising and the Tiananmen Square massacre. The Olympics is no different. In these times, says Herbert, vigilance intensifies and journalists are ordered to pay particular attention to social order and political stability.
Posted by Derek Barry at 9:34 pm