Picasso and his collection at Brisbane’s GOMA 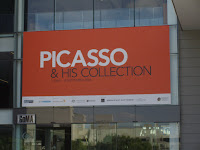 Police in Sao Paulo have recovered a Picasso painting stolen two months ago by armed robbers. The 1933 painting "Minotaur, Drinker and Women" was found wrapped in paper in a woods by the side of a highway near Brazil’s largest city. Police say it was abandoned there by thieves who stole another Picasso and two other paintings from the city’s Pinacoteca Museum. All four paintings, with an estimated value of $630,000, have now been recovered.

Nothing quite so dramatic in Brisbane’s art show dedicated to Picasso, but an enjoyable exhibition here nonetheless, at the city’s stunning Gallery of Modern Art (GoMA). “Picasso and his Collection” is an exhibition of his personal art collection showing at the Gallery of Modern Art (GoMA) from 9 June to 14 September. GoMA is the first venue outside Europe to host the collection. The exhibition features 80 of the artist's own works interspersed with over 100 works from other artists in his extraordinary private collection.

Pablo Picasso is probably one of the greatest painters of the 20th century and certainly one of the most inventive. From the time he moved to Paris in 1900, aged 19 to his death 73 long years later, he explored every imaginable style from realistic to abstract. He worked in many mediums including paintings, drawings, sculptures in stone, bronze, wood, and printmaking. He invented the collage technique, co-founded Cubism and was one of the pioneers of Surrealism.

He was born 1881 in Malaga with the improbable name of Pablo Diego José Francisco de Paula Juan Nepomuceno María de los Remedios Cipriano de la Santísima Trinidad Martyr Patricio Clito Ruíz y Picasso. Ruiz was his father’s name; Picasso his mother’s. The other names honoured various family members and saints in traditional Spanish fashion. His father José Ruiz y Blasco was a well known painter in his own right and an art teacher who instilled a love of classic art in his son. After studying art in Barcelona, the young Pablo went to Paris, where he was befriended by the poet Max Jacob. The pair shared a tiny apartment, Jacob slept in the single bed by night and Picasso slept by day.

Gradually, Paris transformed Picasso and his painting. Through Jacob he got to know most the great cultural figures of the city and through exhibitions at the salon des independents he got to know most of its art. Picasso would prove to be a great collector of art too and he inherited his father’s love of the old masters, in particular the 19th century realist paintings of Louis Le Nain, Jean-Baptiste Chardin and Jean-Baptiste Camille Corot.

Picasso loved their primitiveness and called their works “pure painting”. He painted “Returning from the Christening (after Le Nain)” in pointillist style in Le Nain’s honour. He acquired Gustave Courbet’s “Head of a Chamois” which turned its subject matter into a minotaur and then recreated the moment in his own visceral 1952 painting “Goats Skull, bottle and candle”. Picasso was also deeply affected by the realist paintings of Henri Rousseau which in turn inspired many in Picasso’s own set. Juan Miro said “it was at Picasso’s place I first saw a Rousseau”.

As well as the realist masters, Picasso loved the works of Gauguin, Degas, Cezanne and Renoir. He saw all their works as they were displayed in Paris. Once again, it was the primitivism of Gauguin that captured Picasso’s imagination. He was also deeply influenced by Gauguin's Tahitian diary Noa Noa. Picasso was no great fan of the impressionists but when Gauguin, Degas and others disassociated themselves from the movement, they were seen as providing the origins of the modernist movement.

This movement was all around Picasso. His poet friend Guillaume Apollinaire decried impressionism and said it was time “for an art that is nobler, bettered ordered and more cultivated”. Picasso himself also admired Cezanne and Renoir as “dissidents of impressionism” and he called himself “the grandson of Cezanne”. Meanwhile Renoir’s fleshy nudes were art in a classical vein free of any dry formalism. These paintings inspired Picasso’s 1920s “large bathers” series.

Picasso first collaborated with George Braque in 1907. Picasso had by then become intrigued by African and Polynesian art forms and was starting to build up his own collection of masks, drums and totems. As well, Cezanne’s later work began to break up the painted surface into small multifaceted areas of paint. Together, Picasso and Braque began to paint objects in broken-up and abstract forms flattened into geometric forms viewed from different angles showing “all sides at once”. Cubism was born. The pair worked on each others paintings and were fascinated by the idea of anonymous art. When Picasso designed the costumes, masks and sets for the 1920 Stravinsky ballet Pulcinella, the masks were modelled on the Mukuyi masks from Gabon in his personal collection.

It was Apollinaire again who coined the term surrealism in 1917 to describe Jean Cocteau's ballet Parade and his own play The Mammaries of Tiresias. Picasso quickly became enamoured of the new word and its possibilities. “I’m interested in a deeper level of resemblance, more real than reality, which reaches the level of surreal,” he said. Picasso participated in the surrealist painters’ first exhibition at the Galerie Pierre in 1925 alongside Max Ernst, Giorgio de Chirico, Joan Miró, Hans Arp and Paul Klee. However he refused to affiliate himself with the movement, always preferring to be, as Victor Brauner put it in 1953, "a great initiator".

Throughout his artistic life, Picasso had a great friendship and rivalry with Henri Matisse. Their meeting in 1906 marked the beginning of a relationship based on reciprocal admiration and a creative rivalry. Gertrude Stein said they both showed “great enthusiasm for the other, without actually liking each other much”. Both men were inspired on to further greatness by the works of the other but neither deigned to copy. As Picasso said “a painter’s studio must be a laboratory. It is not about aping but about invention. Painting is done in the mind”. The GoMA exhibition ends with Picasso’s Le Vieil homme assis (the seated old man) 1970–71, a disguised self-portrait of which the brilliant colours speak in memory of Matisse. As he neared his own death he could confidently state “No-one has ever looked at Matisse’s painting as closely as I have”.
Posted by Derek Barry at 11:19 pm